The Dolphin Hotel Southampton is one of England’s oldest and most historic hotels.

The core of the Dolphin Hotel Southampton, dates back to the mid C13th when Southampton was a thriving merchant city, full of tradesmen and visitors putting into port. The Dolphin Hotel at this point was probably a merchant’s house, its cellars full of fine wine from Gascony. The stone vault remains with some original wooden timbers. From this core the building had been added to and extended and records of it being used as a hostelry from as early as 1550. 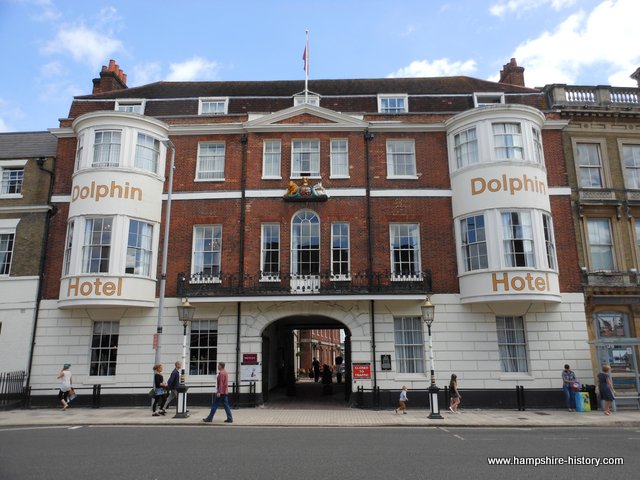 Were Shakespeare’s plays performed at The Dolphin Hotel?

The Dolphin Hotel Southampton is situated in the High Street, a stone’s throw from the ancient church of St Michael and the quayside. Foreign merchants and sailors would frequent the Dolphin for an evening of entertainment. The Dolphin Hotel has a yard in which plays were regularly performed in Elizabethan times. It has been suggested that Shakespeare’s plays were performed here and maybe so, given the connection between Shakespeare and his patron Henry Wriothesley 2nd Earl of Southampton, who lived not far away in Place House at Titchfield.

Other entertainment was available for the travelers, the town records reveal various sums of money paid to minstrels and musicians. It must be supposed that it was better to entertain the crews than have them unoccupied on the streets!

Southampton as a spa town

In the C18th, Southampton was praised for its bracing air, its sea bathing and its mineral waters. The town attracted visitors, including Royalty to enjoy all that Southampton had to offer as a spa town. Public ammenities were improved and inns and hotels enlarged. Coaching inns blossomed and the Dolphin Hotel Southampton was redeveloped in 1775 to capture this new trade.

The Collyer coaches stopped at the Dolphin on their way to London, taking the new spa tourists back and forth. The steam packet companies also plied their trade taking passengers to and from the Isle of Wight. 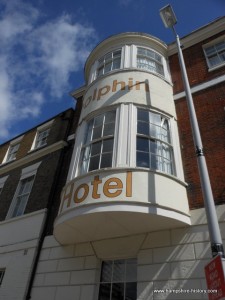 The Dolphin Hotel had its fair share of high class patrons. Queen Victoria, and Admiral Lord Nelson visited and Jane Austen celebrated her 18th. birthday there in 1793. It is said that she attended a ball in the beautiful first floor ballroom with its magnificent bow window. Between 1806 and 1809 Jane lived in Southampton. She made visits to the Dolphin Hotel to attended the fortnightly Winter Assembly where she could dance. Maybe the people she observed at these events provided inspirational content for her novels?

The Dolphin Hotel was a place to meet friends, there were shops including a coffee shop where gentlemen could discuss affairs of the day and a lounge for ladies to take tea. Possibly Jane Austen found inspiration inside its walls, certainly William Makepeace Thackary did. He, like Jane was an astute observer of the human condition and wrote part of his novel, ‘Pendennis’, while sitting in one of the Dolphin’s splendid bow windows, where he could look out on the scene below.  Another visitor was Edward Gibbon, the historian and author of the classic “Decline and fall of the Roman Empire”, among other works who lived at Buriton Manor in Hampshire for much of the second half of the eighteenth century.

It is wonderful to see the Dolphin Hotel still fulfilling its function, in spite of the bombing of WWII that destroyed so much around it. The Dolphin Hotel Southampton still looks amazing and its role in the history of Hampshire is secure.