Romsey Abbey is a mighty and impressive building

Romsey Abbey is an important ecclesiastical site and it’s origins link back to that mightiest of kings, King Alfred the Great. King Alfred carved out parcels of land and estates throughout Wessex that he willed to his wife and his daughters. Alfred died in 899AD.  These estates later came to be owned by Romsey Abbey. The suggestion is that a nunnery was founded by Elfleda who was King Alfred’s grandaughter, in 907AD, on the site of Romsey Abbey, land that the monarchic family held. The site may already have held special significance and was chosen for that reason. The nunnery seems to have been built as a substantial structure, possibly built of stone with chalk foundations. It would be a fitting building for a descendant of King Alfred and the daughter of King Edward the Elder, to become Abbess of. The nunnery must have continued to thrive because by the time of King Edgar, who came to the throne in 959AD, it was wealthy enough to give gifts to the King of gold armlets and a gold scabbard as well as a handsomely filled purse. King Edgar in exchange had gifted more lands to the nunnery.

What is the connection between the royal household and Romsey Abbey?

The connection between the royal family and the nunnery seems to have been founded on a deep and personal relationship. It points to the site being of ancient spiritual significance and one that had a legacy of importance among royal and other high born families. The site of the present Romsey Abbey was the burial place for King Edgar’s young son Edmund Aethling.

The Romsey Abbey buildings would, for the first few centuries of it’s existence been a fairly isolated complex, surrounded by open fields and of course, close to the river. As time went on though, a larger settlement grew up around the Abbey. As in so many parts of southern England Danish raids were a constant threat and at one point at around 1000AD, the nuns fled to Winchester to escape them. On their return, a ward of King Edgar, a woman called Ethelfreda became Abbess. The following hundred years saw the building of a new church, on the same site as the present day larger one. The Norman invasion must have impacted on Romsey Abbey, as it did across the rest of the country. It’s wealth would have made it attractive to the Conqueror and records show that the value of Romsey Abbey estates fell in the 25 years after the invasion. This was a great Abbey, where great woman were sent to be educated in many skills. The king of Scotland, Malcolm III was brother in law to Christina, who became Abbess of the Abbey in the 1090’s. He sent his daughters to the Abbey, where Edith his daughter, also known as Matilda of Scotland, was courted by William Rufus. He was spurned but she later married his brother, King Henry I. King Henry I subsequently granted a charter to the Abbey to hold an annual fair and a weekly market and it is suggested that at this time Queen Matilda (Matilda of Scotland) was directly in charge of the Abbey.

So how did Romsey Abbey come to be such a large and impressive structure? 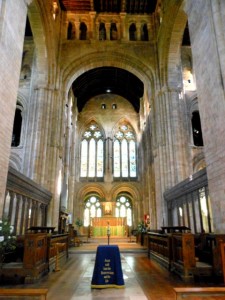 By 1120 the nuns began to rebuild their church with a magnificent structure in the new Romanesque style, it is not known who paid for the rebuilding but the fact is, it was never rebuilt again and so exists now as possibly the most intact Romanesque church in England. The stone was sourced from Quarr on the Isle of Wight probably rafted to Romsey and brought across land from Wiltshire, a tremendous feat of logistics.

The links with the Royal family continued

The importance of Romsey Abbey cannot be underestimated, high status royal females continued a line of Abbesses in the C11th and C12th. Mary of Blois, sister of John be Blois and King Stephen became Abbess and King John sent his daughter there as Abbess and royal gifts continued to be plied to the Abbey. The Abbey system served women from important families well during the Medieval period. Such women bore great influence and Romsey Abbey would have been an establishment with which the highest in the land would want to be associated. 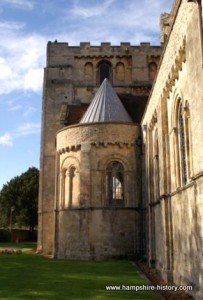 The two were intrinsically linked, when the town was thriving, so was the Abbey. Economic success for the town and it’s population meant wealth for the Abbey. The decline in the town’s main industries, tanning and woollen cloth finishing impacted on the Abbey, as did crippling taxes. The Black Death in 1349 had a devastating affect upon the nuns in Romsey Abbey and like so many other ecclesiastical centres, the death of so many educated people, people who could read and write Latin, meant replacing them an almost impossible task.

It is hard to imagine nuns from this once influential abbey begging on the streets but in a post Black Death England few options were left open to them. It took the intervention of the Bishop of Winchester at the time, Bishop Edington, who gave them lands and property from which they could raise rents. Society was changing though and the role of women within it. The status and education women had received from the Abbey was not as acceptable in C14th England as it had been in the C12th. Although women from lesser households continued to be sent to the Abbey, the money they brought with them was less than from the aristocratic families. The whole Abbey complex continued to grow until the dissolution of the monasteries in 1539 when it’s community was dispersed. Romsey Abbey itself was saved from destruction as the local population of Romsey had used the Abbey as the local church. A large part of the Abbey was dedicated to St Laurence and used by local people. It is Hampshire’s largest parish church, a quite remarkable building.