What can the Medieval merchant’s house tell us about Southampton during the C13th? 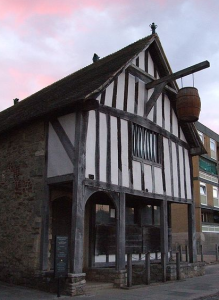 In Southampton it is quite extraordinary to see a C13th building, the Medieval Merchant’s House still standing. The city of Southampton was devastated by Hitler’s bombing raids in WWII. So what can thisMedieval merchants house house tell us about Southampton during the C13th during the 100 years war, when this time the threat came not from Germany but France?

The building dates from around 1290, when Southampton was flourishing as a trading port. Following the Norman Conquest, it was the natural port of transit between Normandy and Winchester and although the importance and role of Winchester was to diminish over the next few hundred years, the link to France, as far as Southampton was concerned remained as strong as ever.

So what goods were being traded from the Medieval Merchants house?

The original Merchants House was built for one such wine merchant, a man named John Fortin. He had large vaulted cellars built under his shop and he lived above it. The wine he sold, would have come onto the quayside and been carted to his cellars built of stone, as much of the house was, to keep the wine at a cool constant temperature. 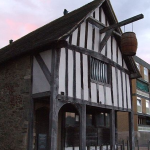 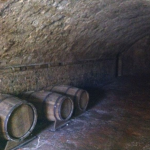 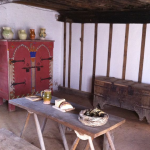 The property remained a separate dwelling and by the C15th was back in business again, this time the trade was wool and the merchants Italian but as in all things, this trade too fell away, leaving the house to also decline along with the area.

The house stands today, despite attacks on its frontage by both the French and Germans and despite the waxing and waning fortunes of the town it has served for over 700 years. Now cared for by English Heritage and open to visitors.

Are you interested in finding out more about Medieval Southampton?

Where is Southampton Castle and what is its history? What happened to Southampton in the 100 years war.?

Hampshire has a fascinating history to explore, use the map to find out more about the history of your area. Nuggets of information to just waiting to be unearthed.