Bishop’s Waltham Palace, the name itself conjurers up the magnificent place it must have been 900 years ago. 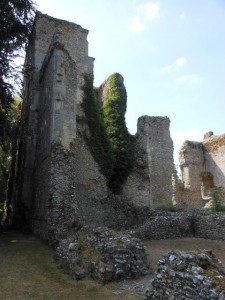 Bishop’s Waltham Palace lies just ten miles away from Winchester Cathedral and was the noble palace of its Bishop’s who built a splendid residence for themselves and a 1000 acre park. Henry de Blois, that inveterate builder, began to build it as a castle in 1136. One of his successors, William of Wykeham finished it as a palace until eventually in the C15th, Bishop Thomas Langton built a wall around and erected the garden house.

It is a ruin steeped in a sumptious history.

King Henry II called a council at Bishop’s Waltham in 1182, to ask his nobles for supplies and to plan a Crusade, but that was only the beginning of a succession of  royal visits. Seven years later, King Richard I stayed at the palace and was entertained after his crowning at Winchester and before embarking on his last Crusade.

In 1415, the year of his great victory at Agincourt, King Henry V came to stay here.

In the following century King Henry VIII stayed at Bishop’s Waltham Palace before embarking for France where he would meet with King Francis in one of the most unusual diplomatic meetings, the “Field of the Cloth of Gold”.

There are a series of buildings, the West Tower was the Bishop’s residence and was built in the C12th. Bishop Wykeham added to it in the C14th. The steps leading into it tempt the eyes upwards to the five great windows with embattled transoms. Now shrouded with ivy the tower has quite an ‘Arthurian’ feel to it. 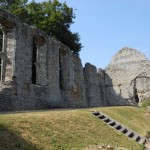 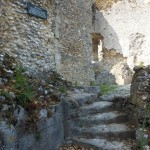 Stairs to the West Tower From the tower springs the great hall, again built in the C12th and then rebuilt during the time of Wykeham. What is striking about the ruins of the Great Hall are the majestic windows. They are statements of power in no uncertain terms. The chapel and crypt are across the way from the tower, not begun until 1416 by Bishop Beaufort but presumably there must have been a previous church?

In order to service such a household, there would have been a great number of servants who needed to be fed and housed. The brewhouse is almost as long as the Great Hall itself.