Who was Bishop Walter Curle of Winchester who arrived in the village of Soberton in a cartload of manure? 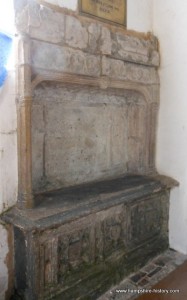 Bishop Walter Curle was born into a Hertfordshire family in 1575 during the reign of Queen Elizabeth I. He chose to enter the church as a profession and attended Cambridge University where he became a fellow of Peterhouse College. After becoming the incumbent of a number of churches, he made his mark as an impassioned and inspiring preacher and in 1628, was consecrated Bishop of Rochester. Curle also became chaplain to King James I. Rochester was one of the church’s power houses, within a year he was translated to the see of Bath and Wells and then to one of its most powerful sees, that of Winchester.

Bishop Walter Curle saw his time at Winchester, as one in which he could act upon his stance of anti dissent. He, along with King Charles I and Archbishop Laud, was deeply mistrustful of those who were dissenters from the established church, the Protestant Nonconformists in particular. He was intent on repairing the damage he thought had been done to Winchester Cathedral, by those who were serving as Bishops during Queen Elizabeth’s reign.

He stopped the general public from using the cathedral as a short cut, he returned the altar to the sanctuary and he added many of the embellishments seen today, such as the bronze figures of King James I and of King Charles I.

He was able to reside in one of the great palaces afforded to the Bishops of Winchester, Bishop Walthams Palace and it was to here that Bishop Walter Curle fled from the advancing army of Oliver Cromwell. In 1644 Curle was besieged inside the palace.

After their epic battle at Cheriton, (read more about the Battle of Cheriton) Cromwell’s troops were wild with excitement and sensed victory over the Royalists. Bishop Walter Curle knew his only chance of survival was to escape the palace and he allowed himself to be hidden under a great pile of rotten horse manure and carted out of his residence.

He was brought to Soberton where his sister lived. Within a day, his palace was burnt to the ground. The following year, when the Roundheads finally routed Winchester, Curle refused Cromwell’s offer of safe conduct and returned to Soberton, where he continued to give help to other beleaguered Royalists, until he died, sometime in the late 1640’s. 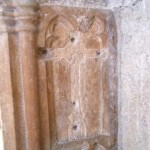 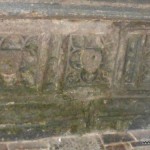 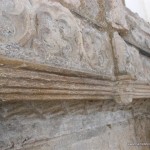 Bishop Walter Curle was buried in St Peter’s Church Soberton, in the Lady Chapel, which was re-named the Curle Chapel. Stripped of much of its grandeur, it is hard to think of the man, whose loyalty to his Kings and church resulted in much that we see in Winchester Cathedral today. What must he have thought, as tales of Cromwell’s troops, riding through the streets of Winchester, wearing the surplices he restored to the choir, were related to him. He lived frugally, his bejeweled days at Winchester, a distant memory. Just up the road in the village of Exton is the memorial to John Young, Dean of Winchester and friend to Bishop Walter Curle during his bishopric.

In 1841, an incumbent of Bishops Waltham gave a lecture in which he described being in the possession of a royal bible, of finely tooled leather, embossed with the Royal Arms and bearing a date of 1613. It belonged to the Palace and  left the same day as Walter Cuele did, did he remove it with him and take it to Soberton? Whatever the truth of that, it was in the hands Rev. Charles Walters of Magdalen College in 1844 but has since vanished…