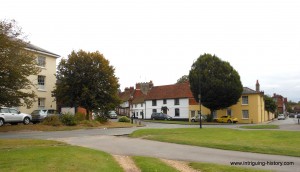 Petersfield history as a commercial centre started to emerge at the time of the Norman invasion of 1066. The settlement lay on the northern fringes of the large parish of Mapledurham. Over the next hundred years a small chapel was built, close to the crossing of two major east west and northeast southwest routes. The little chapel was dedicated to St Peter and around this chapel the town of Petersfield grew.
A charter was granted to it in the C12th and in order to generate income for the lord, a market square and main street added with plots of land (burgage plots) fronted with workshops from which trade could be conducted.

During the medieval period most areas of the country practiced mixed farming, it was vital to produce as great a range of foodstuff as was possible locally, however the chalklands of Hampshire meant that the balance of mixed farming was skewed in favour of sheep. From the medieval  period the chalk downs of Hampshire were well known for their wool  production, with Winchester being one of the nine staple towns in the country.

Sheep were not only able to provide, meat, milk, leather and wool, they could, if managed properly support valuable corn production. The process of folding the flock whereby a piece of ground is enclosed, and the flock shut up in it every night during the summer, meant that the dung, urine, and heat of the animals meliorated the soil and made it extremely fertile for growing corn. A hundred sheep, in one summer, could fertilize eight acres of land for six years.

From as early as the C13th the importance of this system was recognized. Chalk land manors, such as existed around Petersfield, could maintain flocks of around 2,000 sheep. During the Medieval period the Bishopric of Winchester was one of the wealthiest sees in Europe, grown rich on the back of sheep. 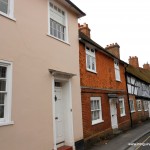 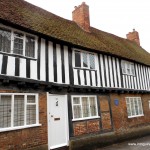 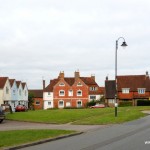 The names of the streets in Petersfield belie its former trade.Sheep Street runs down into The Spain, where large houses sit around a small green. Although the exact origin of its name is uncertain, it could quite possibly be connected to Spanish merchants who may have traded there or it may be a corruption of the word ‘spayne’ meaning tile and certainly the large houses here would have had roof tiles rather than thatch. John Goodyer, C17th botanist, house is in the Spain.

A change in the national economy of Britain came about at the end of the C18th and more downland was put to corn and sheep moved to the north of the country. The wool market started to decline and the wool towns of Hampshire suffered as a result, including Petersfield.