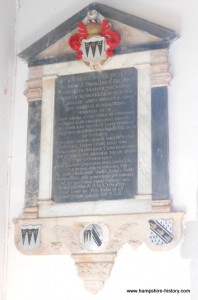 John Young Dean of Winchester, at a time of immense political turmoil in the country during the English Civil War was a great diplomat  and shaper of the ecclesiastical community at Winchester but what is his link to the Meon Valley villages of Exton and Soberton?

Bishop Walter Curle 1575 – 1647 was appointed to the see of Winchester from 1632 to 1647. He was put under siege in Bishop Waltham’s Palace, as Cromwell’s army advanced after their victories at the Battle of Cheriton. Curle and to Soberton in a cart load of horse manure.

Curle was a close supporter of Archbishop William Laud and was robust in his belief that the more radical forms of Protestants that had emerged during the reign of Queen Elizabeth I, should not be tolerated. He had been chaplain to King James I and was a staunch Royalist and friend to King Charles I.

Archbishop Laud lost his head during the Civil War but Bishop Curle, despite his Royalist views managed to keep his and died in Soberton, living frugally and still supporting Royalists who needed befriending.

His memorial can be seen in the church of St Peter in Soberton.

So what connects Bishop Curle to another monument in the small church of St Peter and St Paul in the nearby village of Exton?

On the wall to the right of the altar in the church of St Peter and St Paul Exton, is a memorial stone to John Young, who was Dean of Winchester at the same time as Curle was Bishop there and the two were friends, born of a vision to return the cathedral to High Church.

Young was a very interesting chap, not least because of his wall memorial…

Take a close look at the memorial, written in Latin and English See if you can work out the date on his epitaph, hidden in the chronogram   ‘VenI VenI MI lesV IVDeX VenI CIto’

So who was John Young?

John Young was born in 1585 and died in 1654 and lived through momentous times in England’s history, with the beheading of both Mary Queen of Scots in 1587 and King Charles I in 1649.

He was born the son of Sir Peter Young, tutor and advisor to King James VI, a kind and noble man from whom John was to inherit these traits. He was just one of his fathers sixteen children, many of whom reached distinguished positions. He was the first Scot to take a degree at Cambridge University. He then traveled extensively in Europe, acting as a tutor for a noble family. He became a Royal Chaplain for King James as did Curle and he was appointed to the office of Chancellor of Wells, where Curle also served as Bishop. He came to Winchester in 1616 and continued to be entrusted with delicate royal and ecclesiastical matters, that required his obvious diplomatic skills.

His steady pragmatic hand was needed at Winchester, which was a hotbed of academics, deans of various royal chapels, many ‘wannabe’s’ and other self seeking and unscrupulous souls. A country in increasing turmoil just added to the mix. He stood as Dean for thirty years until he was finally routed by Oliver Cromwell and left Winchester for his property in Wallop, where he died on July 20th 1654 and was buried at Exton on August 1st. He wrote his own eloquent epitaph, ten years before his death and inserted the chronogram.

John Young kept a diary (download here) like his father before him, for most of the three decades that he was dean of Winchester, from 1616 until he left in 1645. The diary only came to light in 1918 and is kept in Winchester Cathedral library. Young served under four bishops, principally Lancelot Andrewes, Richard Neile and Walter Curle. All favoured reverence for sacred buildings that had suffered years of neglect or worse arising from extreme Protestantism. Young’s diary records his own efforts to restore order and decency to his cathedral and is filled with domestic accounts as well as the detail of administration. 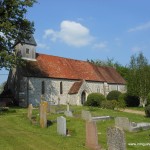 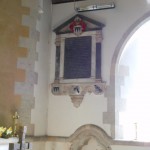