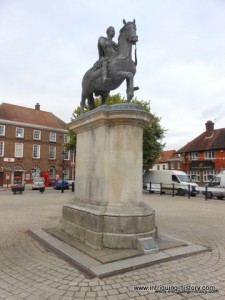 There is an ancient charter of 1120, from William, Earl of Gloucester, giving the patronage of the church of Mapledresham (Mapledurham), with the chapel of Petersfield (St Peters), to the nuns of Nuneaton in Warwickshire. Reserving however, for his life, the rights and privileges to Thomas, who then held the church.

This Thomas appears to have been the grandson of ‘Thurbratus’, who in turn was ‘holder’ of the church at the time of the siege of Tolouse in 1159. This was an important date for William because his brother Hamonn was killed at this battle.

The Siege of Tolouse was a result of Henry II marriage to Eleanor of Aquitaine, Henry gained an interest in Toulouse through his marriage to Eleanor, who claimed it as part of the Duchy of Aquitaine.
Louis of France however could never allow this Duke of Normandy to gain control of it and as Henry prepared a massive campaign against which the French king had to act. The result was an enormous loss of life and face for Henry.

William Earl of Gloucester, was inextricably caught up in these affairs. He was son of Earl Robert who died in 1147. He married Hawissa, daughter of the Earl of Leicester who founded the Abbey of Nuneaton and hence its gift to them.

The actual charter of Earl William no longer exists but the granting of the continuance of that charter was enacted by his widow Hawissa.

‘Know all men, present and to come, that I, Countess of Glooucester have granted and confirmed to my Burgesses of Petersfield, who have built and are settled and who shall  build in it, all liberties and free customs in the same Borough which the citizens of Winchester have in their city, who are in a guild of merchants and let them have the same in a guild of merchants as my husband, William Earl of Gloucester, granted to them by his charter’

This tells a good deal about the sort of settlement Petersfield would have been at the time, it had a guild, a market and a substantial church.

The Gloucesters were closely bound to the royal household and their patronage and interest would have hugely assisted a town such as Petersfield and its close proximity to the hugely important ecclesiastical centre, Winchester.