Between Standon and Hursley just off the A3090 sits Merdon Castle

This little known ancient monument is now in private hands and so getting sight of it is tricky. If you drive along Castle Merdon Lane you can stop and take a look over the wall and you will see the earthworks on which this substantial motte and bailey castle once stood. There is a ruin, a flint and chalk structure which may be a northern gateway tower but again it is hidden from view by trees.

History of the site of Merdon Castle

The castle was built sometime in the C12th probably in the late 1130’s by Henry de Blois, brother of King Stephen and Bishop of Winchester. Many of Hampshire’s early ‘castles’ were built during the years of the ‘Anarchy’ when, in the absence of royal authority, noblemen built fortifications with the intention of creating a little havoc of their own. Henry de Blois was quick to assert his authority and set about building his own castles initially to support his brother and a spate of castle building took place.

The site occupies a south facing chalk spur and had been a bronze age hill fort like so many that can be seen on the chalk downlands. With its views southwards any invasion force from the coast could be cut off. Such a site is likely to have been in constant use over the centuries and certainly the land it occupies was part of the lands settled by Saxon kings. Excavation will reveal whether or not the site supported a Saxon hall as is thought. The castles built around the time of the Anarchy were short lived structures. When in 1153, King Stephen met with Prince Henry up the road at Winchester and made him his heir, it was a time of reckoning for those that had stood alongside Stephen. When Stephen died in 1154 the newly crowned King Henry I lost no time in undertaking a policy of destruction of the numerous castles that had appeared. He wanted there to be no place for the noble rebels to use to overthrow him. That included those built by Henry de Blois.

Merdon Castle was partly demolished in 1155 but was modified and used as a Bishop’s palace for at least a hundred years for which there is written records of such a structure contained within the defences.

Historic England give an excellent account of the various ditches and ramparts and have recognized that it is a unique site that is at risk as the condition of what remains is poor. A site that has such a long period of occupancy is surely worth conserving? 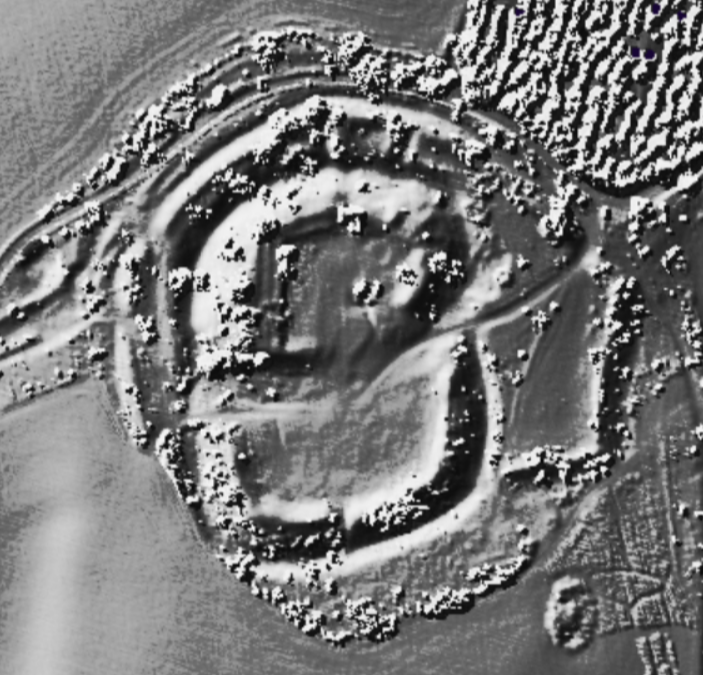 We can learn a little more about Merdon Castle from the writer Charlotte M. Yonge.

Charlotte Yonge was a prodigious Victorian writer who brings us a clear window into the lives of the people of Otterbourne and their surroundings. She relates to us so much detail of everyday customs and lifestyle and includes for us antidotes and stories that had been passed by word of mouth from previous generations. One such tale relates to Merton Castle and the deep well that must be on the site although the Historic England description makes no mention of it.

So from her book, ‘Old Times at Otterbourne’ which was printed by the Winchester printers Warren and Son in 1891, comes this lovely tale of lost treasure and of Oliver Cromwell.

There is an odd, wild story, that Cromwell sunk all his treasure in the great well at Merdon Castle, in Hursley Park, 300 feet deep.  It was further said, if it were drawn up again, that no one must speak till it was safe, otherwise it would be lost.  A great chest was raised to the mouth of the well, when one of the men said, “Here it comes!”  The rope broke, it fell back, and no one ever saw it more.  Most likely this is an old legend belonging to the Castle long before, and only connected with Oliver Cromwell because he was an historical person.  Certain it is that when the well was cleared out about 30 or 40 years ago nothing was found but two curious old candlesticks, and a great number of pins, which had been thrown down because they caused those curious reverberations in the great depth.  Another legend is that Merdon Well is connected with the beautiful clear spring at Otterbourne called Pole Hole or Pool Hole, so that when a couple of ducks were thrown down the well, they came out at Pole Hole with all their feathers scraped off. 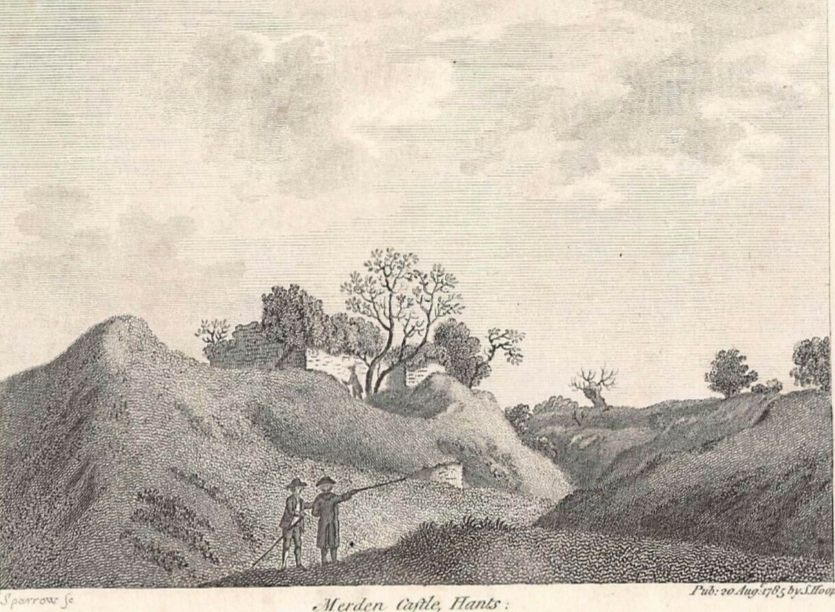 Charlotte has more to say on the history of Merdon Castle.

Charlotte Yonge tells us that the Saxons called Merdon, Merantune and that in 755 Cynewolf, King of Wessex, was murdered there by his kinsman Cyneheard but this is conjecture. It then became the property of the Bishops of Winchester. It was then a manor with a woodland, Hurstleigh and it appears the manor had a number of old manorial rights including the fact that it is a cradle fief, that is to say, the tenure of the lands descend to the youngest son not the eldest.

After the dissolution of the monasteries, Hursley continued in the ownership of the Bishop of Winchester until 1552 when it was surrendered to King Edward VI.  The buildings continued their decline until eventually King Edward Vl granted the manor and park at Hursley to Sir Philip Hoby a prominent statesman of the time whose family retained it for two generations during which time they constructed the first principal house, known as The Great Lodge.

The history of the castle and its estate now takes a different turn. In 1638 it is in the ownership of Richard Major. Richard Major was a member of Oliver Cromwell’s Privy Council and his daughter and Richard son of Oliver Cromwell were married. Richard Cromwell assumed the title “Lord of Merdon”, relating to Merdon Castle.  In 1718 Richard Cromwell’s descendents sold the Estate to Sir William Heathcote, a wealthy merchant and politician and it was he who constructed Park House at Hursley.

Other 12th century castles in Hampshire.

Our guest writer Peter Hey wrote about Bentley Castle and we visited Ashley Castle next to the pretty church but there are signs of motte and bailey castles scattered all over including at Rowlands Castle. Southampton, Winchester and Farnham all had castles of considerable size and importance. 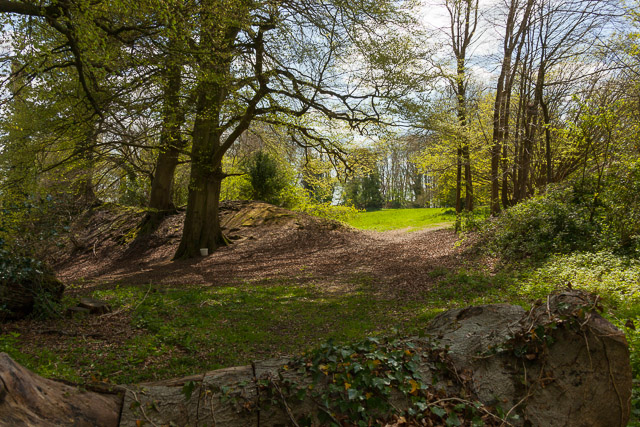