Southampton Castle was built at a time when Southampton was emerging as one of the most important ports in England but what became of it? 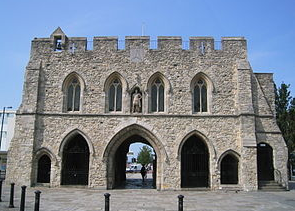 Southampton Castle was fortified when the port of Southampton was one of the most important trading centres in C12th England. The town housed a number of very wealthy merchants and warehouses full of wine, oils and cloth.
The town flourished in earlier centuries, trading with merchants from all over Europe. The River Test formed part of an important waterway. In the C8th, ‘Hamwic’, was a thriving commercial centre. The town of Southampton was protected by water on most sides and then to its northern flanks by protective ditches and banks.

The first castle probably occupied a motte on which the later motte and bailey were built. A coin of King Offa was found in excavations of the C12th castle.
In 1153, a motte and bailey castle with a timber palisade, was built on rising ground in the north-west corner of the town, overlooking the mouth of the River Test.
The timber was swiftly replaced by a stone curtain wall and by the end of the C12th a stone Southampton castle was completed along with a section of wall, partly enclosing the town.The castle was positioned to adjoin the town’s quays and its purpose was to almost certainly to protect the merchants warehouses from sea born attacks.

As Southampton prospered so its fortifications grew

Royalty also favoured Southampton and would visit it regularly, part of Richard I’s ransom after the crusades was paid by Gervase le Riche, who was a wealthy Southampton merchant at the time. The royal household would reside within the castle walls and Southampton castle grew in size to include quarters, a keep and it had its own quay for boats to offload goods.

A bargate was added in 1180, part of the fortified city wall and the main entrance to the city.

The gate is of Norman origin, the central arch the original Norman construction, with arches then added to either side to give support and to allow the building of the Guildhall over the top. It symbolizes all that this great Medieval merchants town was once about, trade and commerce.

The town population grew and by the end of the C12th numbered in excess of 1000 inhabitants but despite their wealth they did not give much by way of funds to keep the castle in good condition and by 1286 was described as being in a ruinous condition and unable to withstand repeated French attacks.

King Richard II saw that if he had any chance of fighting off the french and prevent them from firing the town as they had done so, so many times in the past, the castle needed to be restored and he paid for the rebuilding of a tall circular tower and keep.

From there on in, the castle seemed to thrive, receiving royal visits from both Henry V and Queen Elizabeth I, John Speed the mapmaker wrote of its beauty and it is included on a map by him.

It must have been a stunning site, with seven or gates, the walls had great towers at the corners, with the castle within. Two sides were washed by the tide and those facing inland were moated. As with so many buildings, after centuries of use the castle fell into decline, quite possibly as port matters shifted a little in favour of Portsmouth.

The walls of the castle began to fall down as part of its infrastructure was used to build and repair the city walls themselves.

There is little left extant of Southampton castle, just bits here and there. The only structure remaining, the domestic cellars. The motte was reduced in height and built upon but the C14th city walls can still be seen here and there enough to piece together the extent of the castle and defences of this very important early Medieval town.

The Marquis of Lansdowne’s mock-Gothic castle, built in or shortly after 1805 and demolished in 1816 was meant to incorporate part of the old castle. Jane Austen commented on this ‘modern’ Southampton Castle.