Hampshire Churches and Their Treasures No 11 Soberton 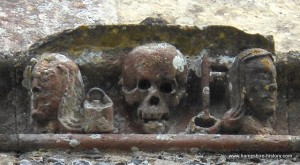 Hampshire churches contain many treasures, some are beautiful, others historically interesting and some raise questions about their origins. A carving that appears high up on the church tower of St Peter’s Soberton is an example of this. It is easy to miss but it gave rise to a legend about how the tower was built by Medieval dairymaids and other servants. Look closely and either side of the carving of a skull appear to be a pail (interpreted as a milking pail) and a key (interpreted as a butler’s key). Whatever the truth of it, the Victorians believed it to be a true story and managed, in 1880, to persuade domestic servants across Hampshire to raise £70 to have the tower restored.

They also put up a plaque that reads:

If you enjoy visiting Hampshire churches and discovering the less obvious treasures they hold, then here are just some of the other Hampshire churches treasures posts. Discover the tulip in the same church in Soberton or see if you can solve the puzzle in the church at Exton, see rare fish at Hartley Mauditt or the smallest angel in Hambledon.