Hampshire baptismal fonts range from the Saxon to the modern with an outstanding collection of Norman and Medieval fonts.

The historical significance of the baptismal font is immense. Baptism is one of only two rites, the other being the Eucharist, for which there is Biblical authority and as such the act of baptism, in a Christian society has always been a powerful force. The baptismal font is often the oldest artefact in the church. Its longevity gives it a symbolic importance in both the continuance of faith and in community. 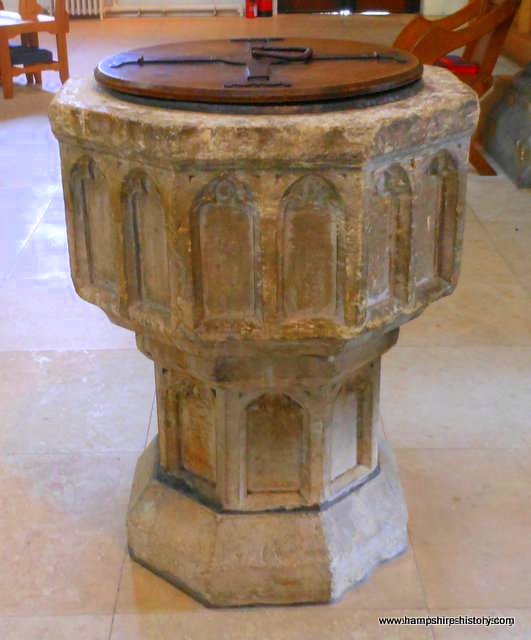 Of interest to family historians

Baptismal fonts seem to have been respected throughout times of re-building and transition of the church. They are good markers for how old a church might be. Early baptisms in Europe were frequently of adults and full body immersion was the norm. Later, it became more common for children and infants to be baptised and the basin became smaller and at waist height.

Most fonts were constructed in stone, quite frequently marble, although some were made of wood or metal. The baptismal font was seen as the doorway into the Christian religion and so many are found close to the entrance of the church. Baptism was established as a ritual which re-confirmed not just the individuals links to the church but the family’s. It forged a strong bond between people in the community and their priest.

Hampshire baptismal fonts provide a wonderful opportunity to examine the stages of church building in the county. A few Saxon fonts can be found in the county, some recovered from church yards and gardens where they had obviously been removed to to make way for the incoming Norman fonts. The C12th is well represented in the county as a great wave of church building took place. The fonts are often magnificently decorated and remain standing in churches even when there is little evidence of other Norman architecture.

Numerous Hampshire fonts are also from the Perpendicular period, that is from 1300 to 1550. After the Reformation, there was a change in the rite of baptism of infants and it was accepted that water could be poured over the baby’s head, rather than full immersion. 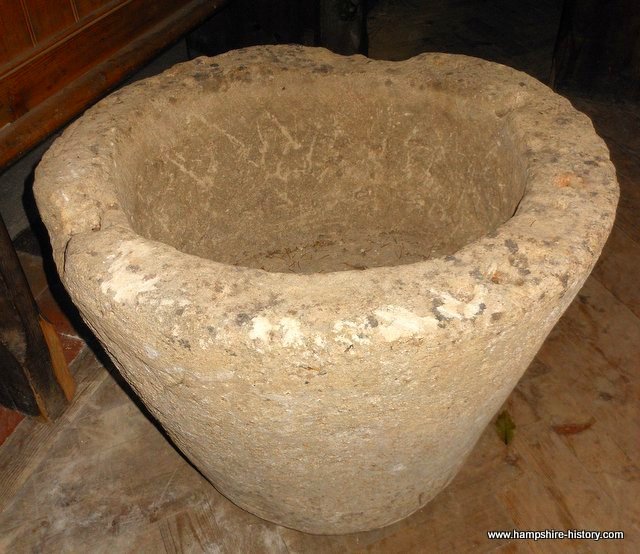 As in all things, style and form change with time and this helps with approximately dating baptismal fonts. The earliest fonts are round simple tub fonts, such as the one tucked behind the pews at Hurstbourne Tarrant. They are usually but not always undecorated, so therefore saying that an undecorated font must be Saxon would be erroneous. Creeping towards the Norman period reveals the emergence of simple abstract rope or spiral patterns but again is would be too simplistic to date them as Saxon based on this alone. Sometimes these tub fonts were raised on a later pedestal and separate base. There then emerged square fonts, still cut from a single block of stone. Again these were raised on a pedestal, the bowl might then have been too heavy and unstable and so was supported on four corners by pillars. This gives the effect of an overall square font with four corner pillars and a central core pillar.

As the Norman period progressed the decoration became more lavish, mythical beasts and biblical stories, sins and sinners, all are attended by abstract carvings. Secular themes may also be included, such as harvest, in the decoration.

There is a slow change through the Early English 1190 – 1250 period through to perpendicular. Decorations became less spectacular, although not always so. There is a leaning towards them having more of an architectural style. The bowl and pedestal  shape began to vary as well during this period with the emergence of octagonal fonts in the C14th. See also at this time the emergence of a raised or a stepped plinth.

Schools of font designers and craftsmen seemed to emerge and it is possible to type some fonts to a particular school. In Hampshire the Tournai fonts seem to have come from one such school in Belgium but English schools existed as well.

The bowl and lid 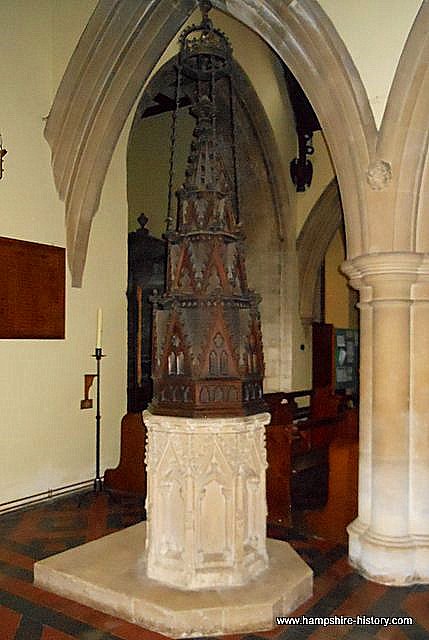 During the Medieval period the infant would be brought to baptism and full immersed in consecrated water, that is water that the priest had placed for the ritual baptism. To stop the water seeping out through the stone the basin would be lead lined. From about the C13th another feature emerged, a lid cover that could be locked. The purpose of the locked cover was to prevent the consecrated water from being stolen and used for some other purpose. On some fonts the remains of clasps can be made out, although the wooden cover itself has long disappeared.

There seems to have a point in time when the lid covers became more important than the font bowl itself with covers becoming like giant pinnacled spires, requiring some sort of a winching system to lift them on and off. The post Reformation fonts continue the practice of elaborate covers although the font’s decoration is more classical.

Baptism remained at the heart of the Christian religion in the post Reformation period. Fonts were more classical in their design. During the Commonwealth period, the Puritans rejected the use of ornate fonts and crafted small simple bowls for baptism as can be seen in the Hampshire church at Dummer. Font design and making seemed to become the province of architects. They used the font as a statement piece in the new church buildings that were emerging. By the time of the Gothic Revivalists, the design of fonts and their covers became strong statement designs and this flowed over to the Victorian period, when beautiful polished marble was used to great effect.

Explore Hampshire’s baptismal fonts on the Hampshire History site. It is a project that will be added to over time and gives basic information about the font and pictures. You may be researching your Hampshire family history and so we hope this will be helpful in adding to your knowledge. Links to the baptismal fonts covered can be found below or type the place name in the search box and press enter, this will show all entries for posts in that town or village. Keep checking back as data is entered daily.