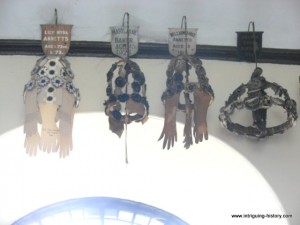 There is something quite unnerving about the sight that greets visitors to the church of St Mary the Virgin in Abbots Ann, for hanging, high around the walls of the nave are no fewer than forty nine virgin crowns or caplets.

Any colour or freshness has long since disappeared, the newest crown was made in 1973 and the earliest, still suspended from its hook, was placed there at the beginning of the C19th.

So what exactly are the virgin crowns and why are they a feature unique to the church of St Mary the Virgin in Hampshire?

The crowns were made from hazlewood (known as virgin wood) or oak. They took the form of a bishop’s mitre and were decorated with white and black paper rosettes. They would then hang from the rim of the crown five gaunlets. On each gaunlet, family members would write the name, ages and date of death of the person and include carefully chosen passages of biblical text or hymns. The gaunlets were not attached to the crown until later in the ceremony. 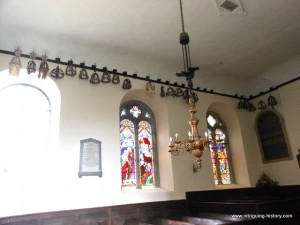 The Nave St Mary the Virgin

During the funeral procession the crown would be carried, suspended on a white wand, by two girls aged between twelve and sixteen, dressed in white with folded cloth placed on their heads. They would lead the funeral procession, turn and place the crown on the coffin, where it would accompany the coffin to the graveyard. It was then removed and hung in the gallery soo that all who entered the church the following had to pass under it and be reminded of the deceased. It was then removed and hung in the nave, on a hook bearing a shield, on which the persons name was written and then left in the church until it falls to pieces.

The crown seems an understandable custom but why the gaunlets?

It is thought that they harked back to the days when knights wore gaunlets as part of their armour and would toss them to the ground to issue a challenge to any adversary who challenged their reputation ‘throwing down the gaunlet’. The gaunlet appeared in the mid C15th.

At the funeral the gaunlets would be held up as a challenge to anyone to call into question the character of the deceased. If no one did so the gauntlets would be raised to hang around the crown.

Even today the crowns act as a poignant reminder of the lives we lead and connect us to a part of our history in a very tangible way.