The Chalk Streams of Hampshire 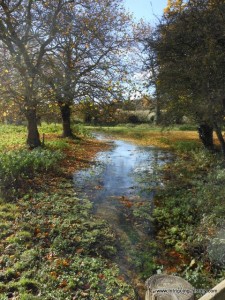 Source of the River Itchen

The three river valleys that seem to personify the county of Hampshire are the Itchen, the Test and the Meon. These clear streams that spring, filtered through the chalk, cut down into the Hampshire chalk bedrock and have produced some of the clearest, most beautiful stretches of water in southern England.

Their beauty is one thing but these rivers formed part of an integral commercial backbone that was fundamental in creating the county of Hampshire as we recognize it today.

The Test and the Itchen, along with the Hampshire Avon, are the world’s most famous fly fishing rivers. Their crystal clear waters are a result of the geology through which they flow, the chalk that cuts a swathe across Southern England.

The rivers and streams that result, are an incredibly rare phenomena and produce a fauna and flora that is unique in the world.
As rainwater falls on Hampshire’s downland, it soaks slowly through the porous chalk. The chalk acts like an immense filter bed and once it hits an impervious layer, pools in great aquifers.

At breaks of slope and where the geology changes, this water seeps out of the acquifers, as springs, feeding the Hampshire river system with beautifully sparkling clear water whose temperature is constant winter and summer.

Because the water has filtered through chalk, it is alkaline and full of dissolved minerals and nutrients and this is the gift of these marvelous waters because they give birth to an ecosystem like no other.

Precious weeds grow and animals that form exoskeletons  such as snails and shrimps, thrive in the calcium rich water.

The exceptional fauna though, have to be the flies. With over half a dozen species of stonefly, twenty two species of mayfly, and nearly forty species of caddis fly, it forms a veritable feast for fish species such as trout, grayling and salmon. This is why the chalkstreams of Hampshire are the world’s most famous fly fishing rivers in the world.

These are not rivers that have been left to their own devices though, since the earliest times these rich resource filled streams have had their courses altered and their waters harnessed in a myriad of different ways. All along their courses one can see instances of former use from mills, to hand cut channels to provide irrigation and to produce water meadows. Deeper channels were cut to allow navigation. Sometimes the tangle of waterways appear natural but many were created to form a complex system of carrier and millstreams.

The land was frequently allowed to flood, enriching the land with fertile silts that allowed for early year grazing. The water was also warm relative to the land temperatures and this also encouraged a longer growing season for the meadows.

Hampshire is known all over the world for its fly fishing but the clear waters also produce some of the world’s best watercress and watercress beds pop up in all sorts of unexpected places. The Bank of England bank notes were made of paper washed with water from Hampshire’s chalk streams.

Kings have sailed navy’s up their courses, sheep’s fleeces washed in their waters and building stones for some of England’s oldest buildings rafted up their valley’s.

The history of Hampshire is wrapped around these beautiful chalkland streams, search the Test Valley, Itchen Valley and Meon Valley to discover Hampshire’s History as it unfolds.