The life and times of St Wilfred in Hampshire was remarked upon in some detail by that most noted of chroniclers, the Venerable Bede. He wrote and commented upon the life of one of the most well known of the early English christians, that of Saint Wilfred. 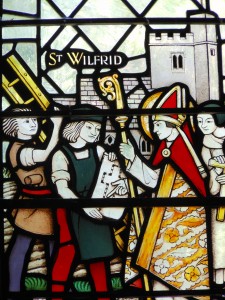 The son of a thane, he entered religious life as a teenager and came under the guidance of St Aidan who founded Lindisfarne. He also received guidance from Queen Eanfled, who, when his own mother died when he was thirteen became like a spiritual mother to him.

He traveled to Rome to continue his religious education and returned from there with a deeper conviction and connection to the Roman church.

He directly influenced the move away from the Celtic church, to the more orderly Roman church practices and began to force his hand upon other matters. There was a growing rift between those whose christian faith was born out of the teachings and missions at Lindisfarne and Iona and those whose leanings were towards Rome and Canterbury. Wilfred was of the latter persuasion, he upset people but was held as a very charismatic man, if somewhat arrogant.
At the famous Synod of Whitby in 664, Wilfred fought hard and won the case for the Roman method of calculating the date of Easter. A major change for christianity in Britain.
He became Bishop of York with a See covering the whole of Northumbria and built magnificent stone churches at Ripon and Hexham. He acquired vast landholdings and established monasteries in Northumbria and Mercia.

St Wilfred’s banishment from the North

In 681 Wilfrid was banished from Northumbria and found refuge under the protection of king Aethelwealh and queen Eaba of the South Saxons.
His work of evangelising the heathen Saxons began in Sussex, although both king the king and queen were already Christians, the population as a whole were Pagans

exiles. Here he founded a monastery made up mostly of the brothers that he had brought with him and established a rule of life there.

He only ended his work in Sussex to turn to a fresh sphere of labour. For, after becoming the spiritual teacher of King Caedwalla of Wessex, he travelled to the Isle of Wight, an area which he became the first to evangelize. 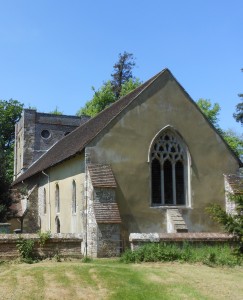 From Sussex he turned his attention to the the Meon Valley in Hampshire, to preach amongst the pagan ‘Meonwara’ tribes, who had long resisted any move towards christianity.

It is thought the church of St Nicholas in Wickham, which is built on an ancient pagan mound was the site of one of St Wilfred’s earliest churches.

Wilfred returned to Northumbria but made powerful enemies, resulting in further banishments about which he made several visits to Rome.

His opponents in Northumbria excommunicated him, but the papacy upheld Wilfrid’s side, and he regained possession of Ripon and Hexham, his Northumbrian monasteries. Wilfrid died in 709 or 710. After his death, he was venerated as a saint.