East Meon and the Bishops of Winchester 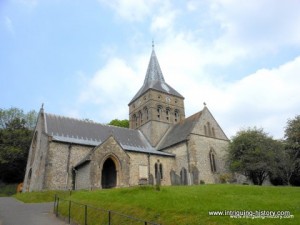 East Meon is situated in the Meon Valley where the Meon River springs from the chalk slopes.It has an ancient history with  vestiges of the ancient trackway to the south that was used by travelers as they traversed their way from Beachy Head westwards. Neolithic flint tools pop up out of the soil now and then and Bronze Age barrows abound on the ridgeway to the south of the village. The Iron Age hill fort of Old Winchester Hill lies to the southwest and there is evidence of Roman settlement in the valley.

What followed next is uncertain but very probably bands of Jutish and or German invaders made their way up the valley and settled.

St Wilfred certainly made his way up as far as Warnford, on his christian ministry and very probably but by no means certainly reached the church at East Meon. By the C8th the first mention of ‘Meon’ is made when land is granted and exchanged between various Saxon kings.

Alfred The Great emerged from a period of great unrest and violent attacks from the Danes as a national leader, the first King of all England and King of Wessex. Winchester became the seat of Wessex and Alfred settled himself at Wolvesey Palace.Thus it was that Alfred The Great owned the manor of East Meon in Saxon times and so began its long and complex association with Winchester, its cathedral and its Bishops.When Alfred died he left the lands of Meon to his younger son.

The lands that made up ‘Meone’ included Froxfield, Steep, Langrish and parts of Privet and various tythings.

Bishop Alwyn of Winchester, (1032 – 1047), first made reference to East Meon as a separate entity, when he granted both East and West Meon to the monks of Winchester, so that they may draw an income from it whilst he, the Bishop, retained ownership of it.

That ownership seems to have been granted by a series of charters, beginning with one in which King Hafacanute in 1042 grants some small area of land to the Bishop of Winchester.

After the Norman invasion, William the Conqueror quickly deposed Alwyn’s successor, Bishop Stigland and installed in his place, his friend, Walkelin as Bishop. Walkelin immediately began to rebuild Winchester cathedral in the  Norman style, still evidenced in the transepts. At the same time he rebuilt the existing church at East Meon and added the imposing tower.

The Bishop of Winchester, who, possibly, was to have most influence in East Meon, was Henry de Blois, brother of King Stephen, Chancellor of England.

He was one of the most important men in the realm and set about building and embellishing properties throughout the county, including the Bishop’s Palace at Bishop’s Waltham, the Hospital at St Cross and Farnham Castle. 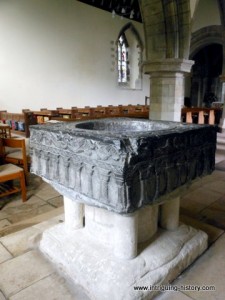 Turning to the churches, he sought to beautify them and gave to the church at East Meon the beautiful Tournai Font, made of black marble, with scenes from the story of Adam and Eve carved into its four sides.

The next Bishop to leave his mark on the village was Bishop William of Wykeham, Bishop of Winchester between 1367 and 1404. Again a man whose influence spread far and wide across the country, he was Chancellor twice and founded both Winchester College and New College Oxford.

In East Meon he built the Court House, across the road from the church, probably on the site of a former building. It was a very grand building with a 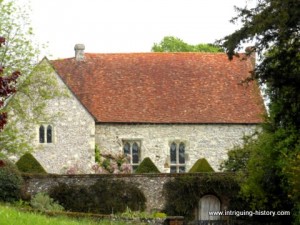 tiled roof and glass windows, the hall of three bays, rising to fifty feet in height, the walls five feet thick. It was intended to be fit to receive visits from the highest in the land, of that there can be no doubt. With administrative, storage and accommodation buildings it was staffed by  a number of monks who looked after the hall and hosted the Bishop’s visits when he held the manorial court there

The last Bishop of Winchester to have a great impact on East Meon was Thomas Langton at the end of the fifteenth century, who oversaw the re-modelling of the east end of the church. He worked with Prior Hinton on the task and their Coats of Arms, carved in stone, can be seen on the east wall.