In an earlier post, the mystery of Hartley Mauditt  was explored. In this article, the history of the church is explored further. There is no sign of a Saxon church but within fifty years of William the Conqueror arriving on these shores, a church had been built at Hartley Mauditt.  The name Hartley Mauditt comes from two periods. Hartley has a probable Saxon origin, meaning a woodland clearing frequented by stags and there are several of these in Hampshire, Hartley Wespall and Hartley Wintney included. It was recorded as Herlege n 1086, Hertlie in 1212 and Hurtlye in 1242. Presumably as people started to travel more widely, having lots of Hartleys about could cause problems and so they distinguished themselves by adding the extra name. In the case of Hartley Mauditt, the name of the 13th century lord William Mauditt, (Maudoit or Malduith) was added.

William Mauditt was granted the manor by King William I. The settlement is considered to be medium size, with 13 households. 8 villagers and 5 smallholders. It had 8 ploughlands (a term which seems to throw scholars of Domesday into a state of anxiety), 2 lords plough teams and 5 men’s plough teams. 6 acres of meadow and 30 swine render.

The manor was held by Earl Gyrth in 1066, the overlord being King William and then in 1086 William Mauditt becomes the lord. William Mauditt was also the lord of Fyfield, Preston Candover, Bessette, Shalden, Portchester and Rowner. This was a very important Norman family who were also Rangers of Alice Holt, a prestigious position. See Hartley Mauditt in Domesday.

The manor house was situated behind the church.

St Leonard’s sits in splendid isolation. The village that the church of St Leonard’s served, no longer exists. The manor house which would have provided work for those living in the hamlet, was destroyed sometime in the 18th century. With no work, people moved away and all that now remains is the church and large village pond.

The church now standing, is a late Norman structure. The south doorway is an example of transitional work, where the round arch of the earlier Norman period gives way to an arch with a point. The decoration is unusual for Hampshire Norman churches. It is a horseshoe design and quite striking. Inside the church, the simplicity of the interior gives the church a lovely calmness and the new roof has saved the structure from any further deterioration. The chancel arch is a solid Norman horseshoe arch and there are two Norman windows, with their round arches over the deep splays. One is to the left of the pulpit, the other to the left of the south door. 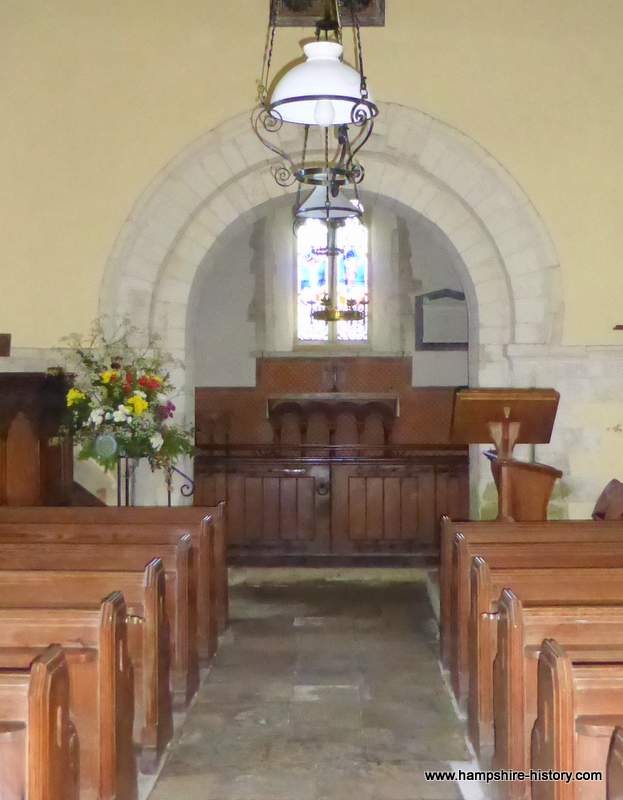 The de Mauditts held the manor until 1267. It then passed to William de Beachamp, click here to read a little bit more about the Beauchamp family. The history of the manor then becomes very interesting. In 1283 the manor passed to Sir Patrick de Chaworth, his daughter Maude, married Henry Earl of Lancaster and their son becomes the Duke of Lancaster. His daughter Blanche then married Prince John, John of Gaunt as he is called. A very powerful man whose son became King Henry IV. Blanche died whilst she was still very young, aged 23 years but not before she had given birth to seven children but that is another story. The manor stayed in the hands of the Duchy of Lancaster for 200 years. During this period, the font was given to the church, note the Lancastrian rose on one side. The font will be added to the series on Hampshire fonts. A 13th century window can be seen behind the lectern and it is worth looking at the picture looking down the nave, on the left is the Norman round arch window and on the right the 13th century pointed arch window. Windows have been re-built and repaired over the centuries, the east window was replaced in the 1970’s but replicates exactly, the original of 1350.

The Memorials of Hartley Mauditt church

The rather grand memorials in the chancel, are for members of the Stuart family who began their ownership of the manor in 1603, when Dr Nicholas Stylward (Steward, Stewart, Stuart), who are apparently descended from the Scottish royal household. The memorial to Sir Nicholas Steward is festooned with heraldic shields. The memorial in the nave is rather simpler and  remembers Thomas Lightharness, who was for 25 years a servant to Sir Nicholas.

Favourite part of the church

The fish tiles in the floor and the font. 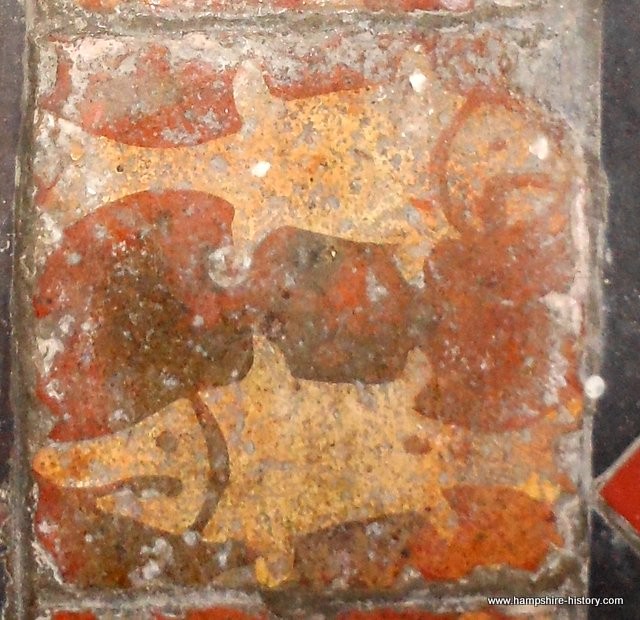