The St John the Baptist Medieval altar piece at Amport is a beautiful and rare object.

Kept carefully behind glass in a cabinet in the church of St Mary’s Amport is an extremely rare and beautifully carved alabaster altar piece of St John the Baptist. 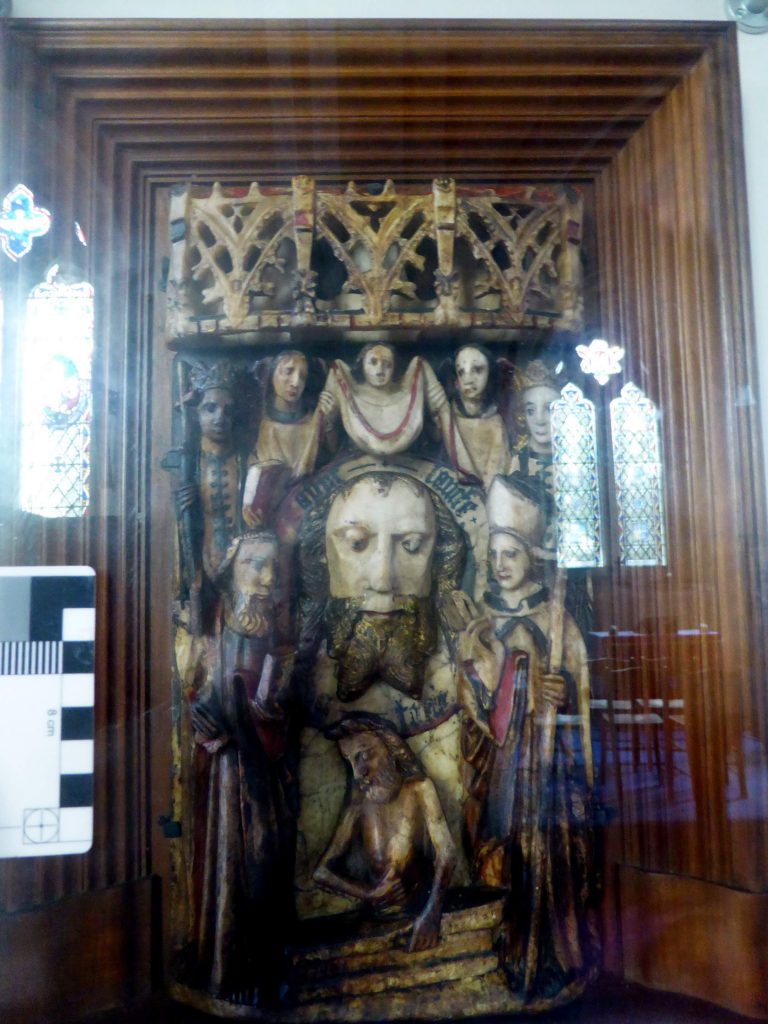 These altar pieces were carved in the 15th century from the soft alabaster rock quarried in Derbyshire and Nottinghamshire (possibly the quarry at Chellaston). The carvings were then sold for export or some of them found their way into churches scattered around England.

The one here at Amport is the largest surviving measuring 18″ x 9.5″ and comes in two parts, the top canopy is separate and measures just 4″.

Originally the carving would have been painted and there is just enough paint remaining on this one to give an idea of how it would have looked when freshly made. 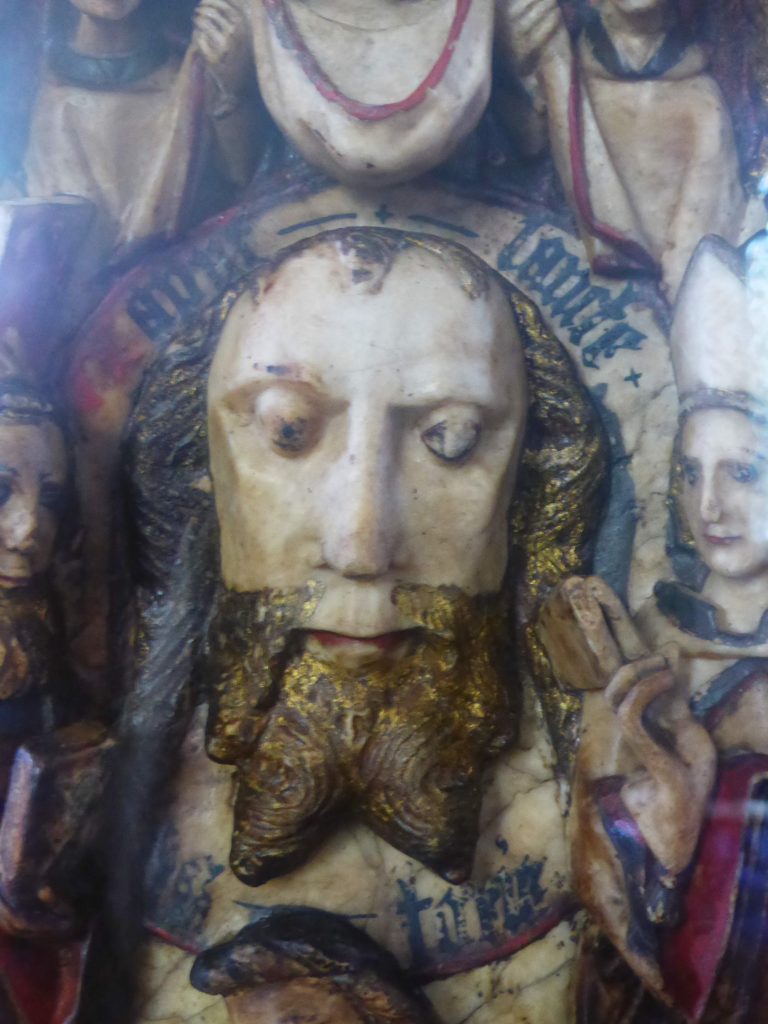 In the centre of the piece is the head of St John on a charger with the text;

Which can be translated to mean ‘The head of the holy writ’.  He is surrounded by angels. Below the head is a carving of Christ the Resurrection and in each corner stand four saints. 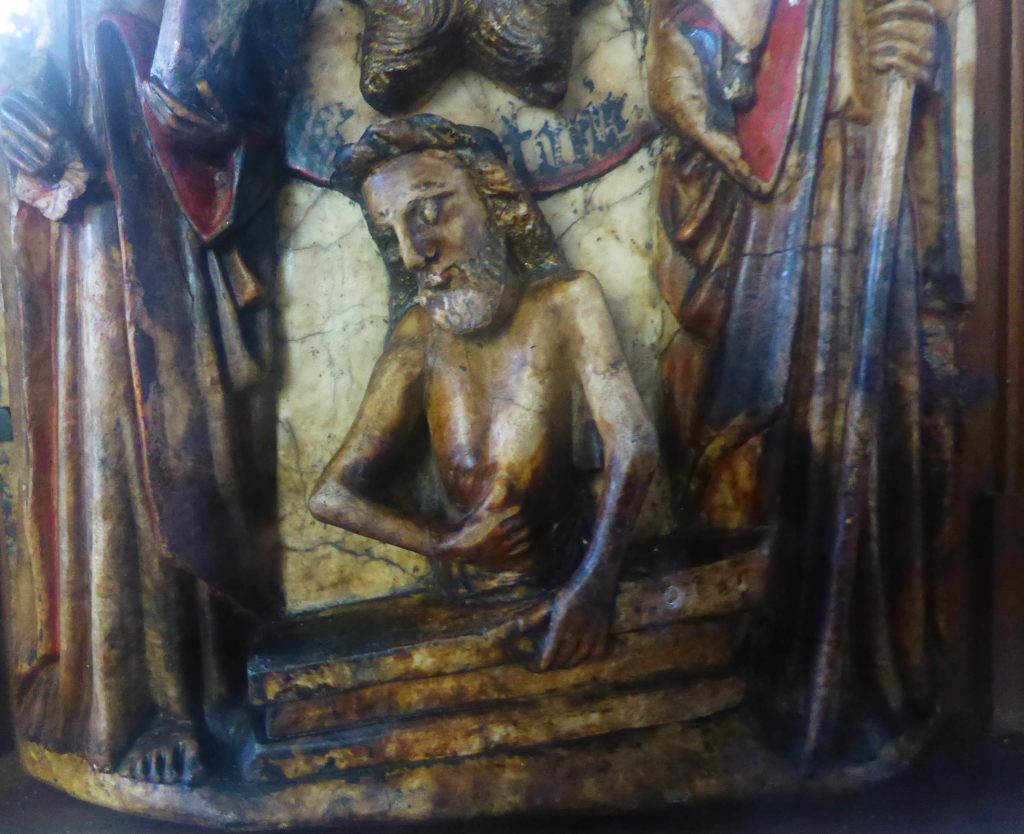 Upper left is St Margaret, upper right St Katherine with a sword but the wheel is difficult to make see. Lower right is St William, Archbishop of York and lower left is St Peter with book and key. 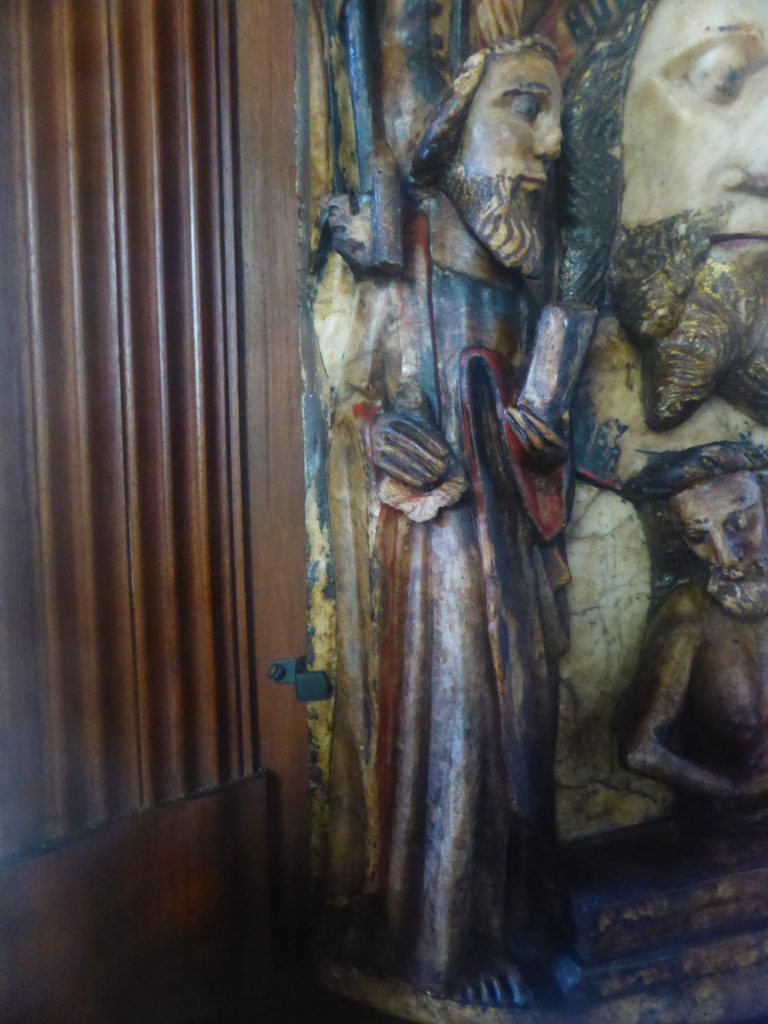 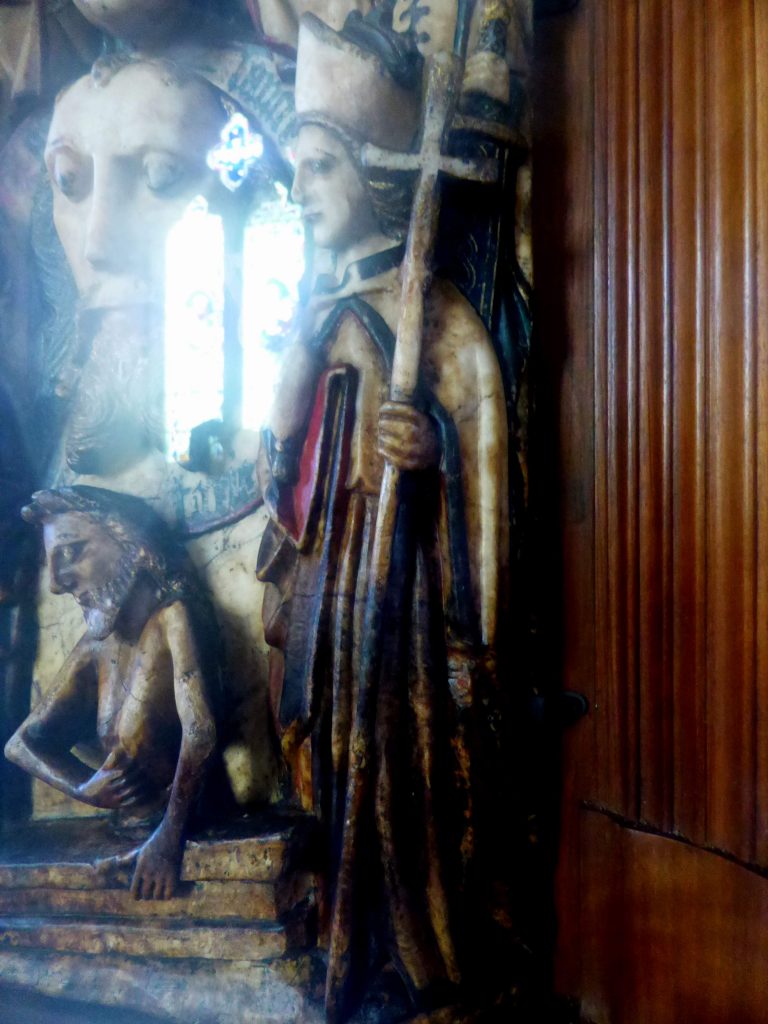 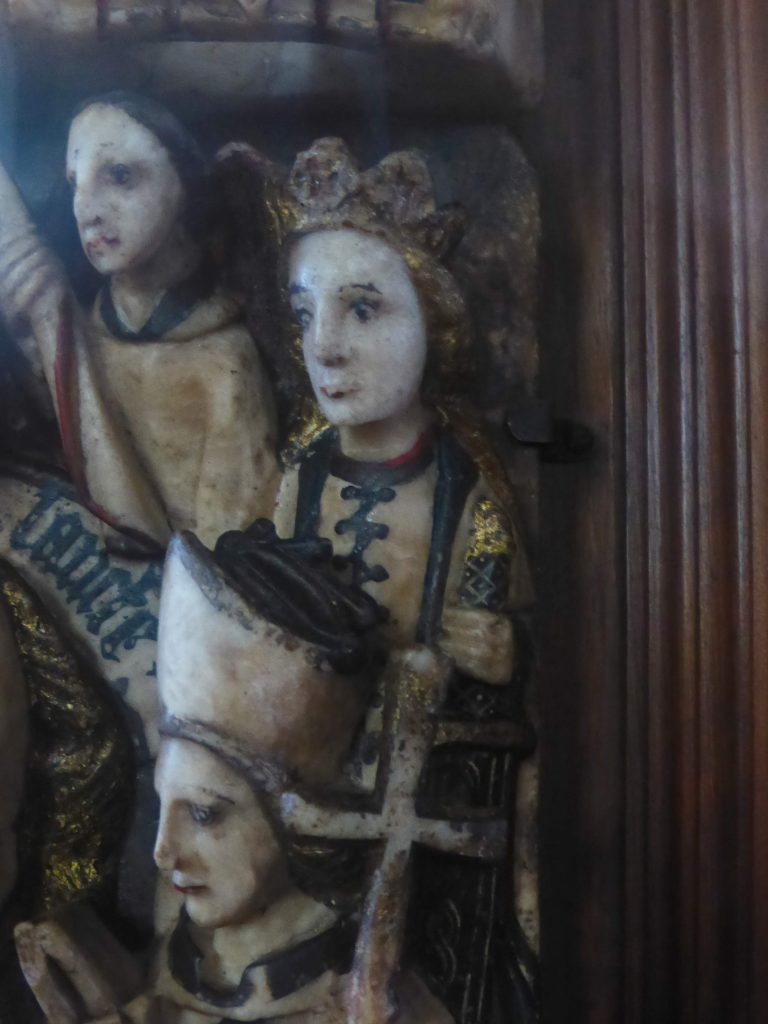 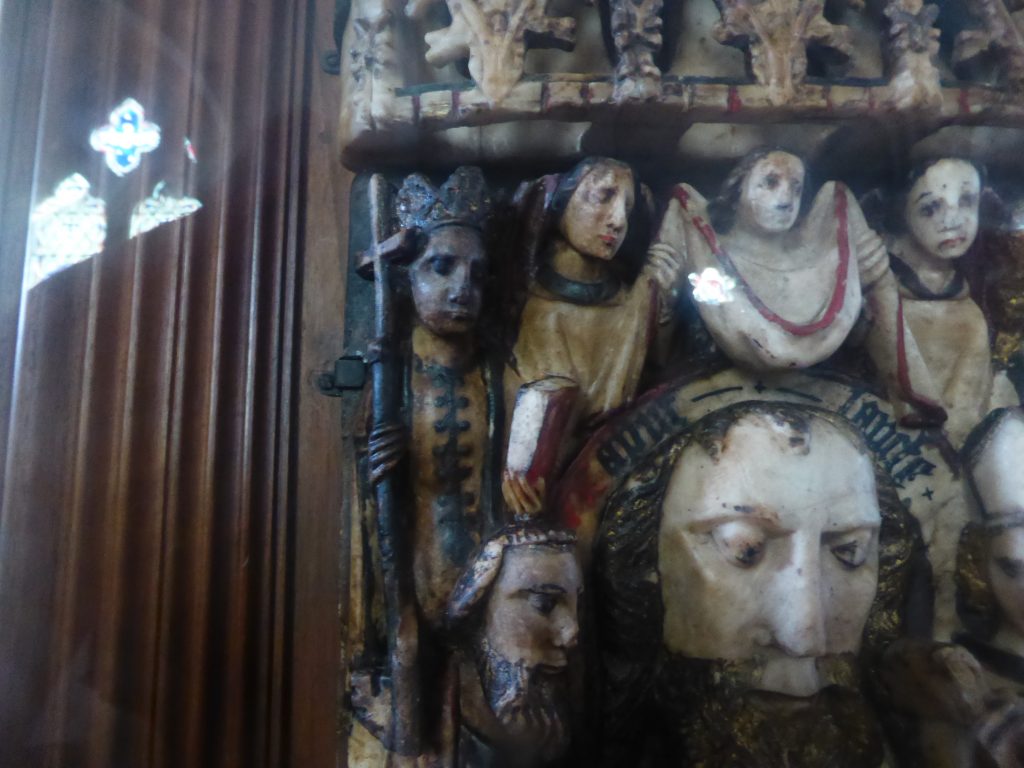 All eyes look down towards Christ and yet all seem to be lifted up by the angels, it is very touching to see. The beard of St John, with no hair on the upper lip and divided into two points has been beautifully depicted and the face of St Katherine is so gentle and kind looking.

There is nothing to say which church the altar piece was originally made for but it was discovered hidden in a chimney recess in a cottage in nearby East Cholderton. Presumably it had been hidden there for safe keeping during the Reformation. Since St Mary’s is the closest church it may well have been placed here originally. 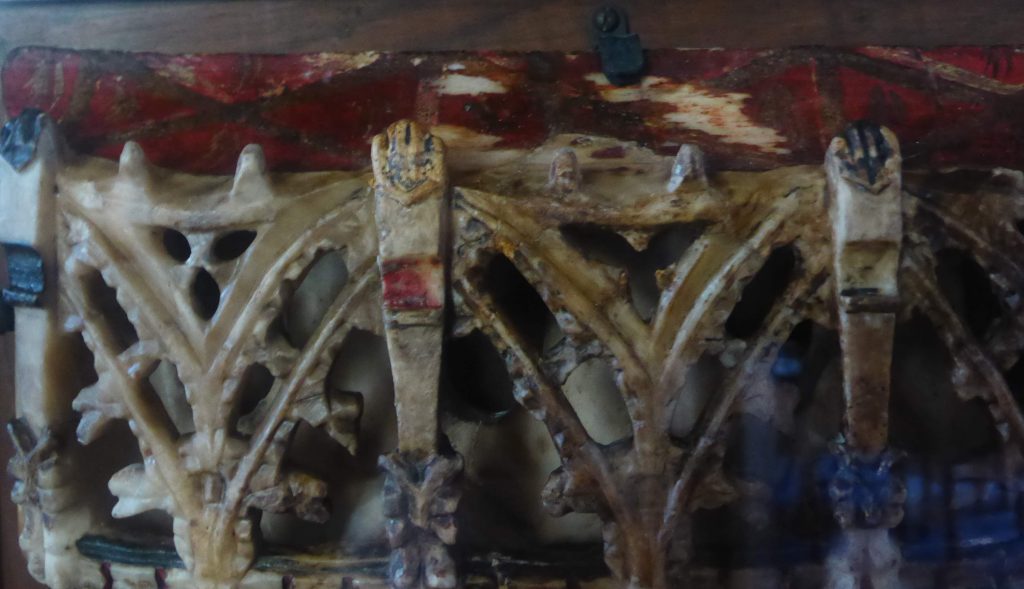 Only a few of these altar pieces have survived some of the alabaster carvings can be seen in the Nottingham Museum. Such an object may well have been brought to the large fairs in Hampshire, St Giles Fair in Winchester certainly had stone masons selling their wares, it is possible the famous Tournai fonts were ordered from just such a fair. Another fair close by to Amport is the Weyhill Fair which, although it was sheep fair from as early as the 13th century would have attracted merchants from all over the country, selling all sorts. It was one of the largest fairs in Europe.

All this is just guesswork of course but what a wonderful thing to have to share here in Hampshire.