Weyhill Fair was one of England’s most important Medieval fairs and one of its oldest, a written record of the fair in 1225 testifies to it being a well established fair known as La We We or De La Woe.

The Medieval fair became established soon after William the Conqueror settled these shores but commercial fairs would surely have been in existence prior to this. The word fair comes from the Latin ‘feria’ meaning holy day. Feast days and fair days coalesced, as the church saw the fair as a good revenue raising enterprise. Fairs could only operate by right of a grant from the crown and the earliest of these grants was given by William the Conqueror to Winchester, to hold its annual free fair on St Giles Hill. The Weyhill Fair took place at three times in the year, in April for trading cattle, July for selling the lambs and October for hops. It is referred to in ‘The Vision of Piers Plowman’ a Middle English alliterative poem from the late fourteenth century 1360 – 1387 and attributed to a man named William Langland.

‘At Wy and at Wynchestre I went to ye fair’

What remains of the booths at Weyhill Fair and the church behind.

The fairs brought people together for a number of different reasons, obviously to trade but also for religious or judicial reasons. The large fairs were held over a period of days or even weeks thus allowing time for people to gather and to trade. At one time the Weyhill Fair was preceded by a church service. 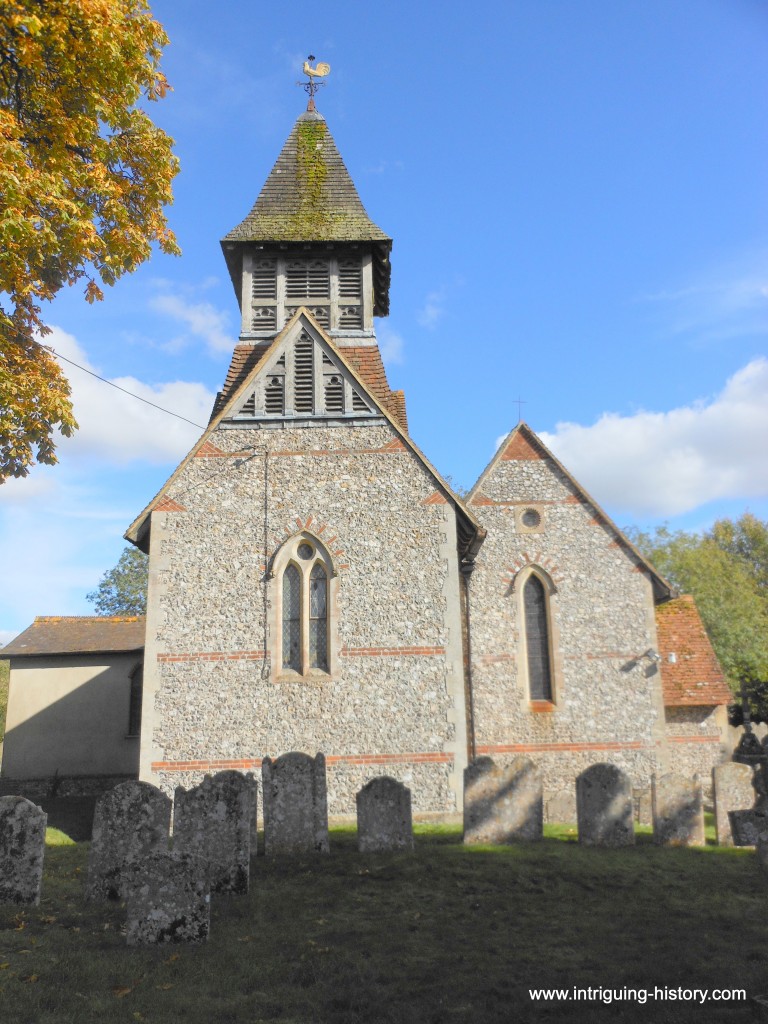 St Michael and All Angels Weyhill

Why was there a fair at Weyhill?

Weyhill lies at the crossroads of many ancient trackways, many in use long before even the Romans settled here. These trackways include the Harrow Way which was used to move tin from the mines in Cornwall, across the country to the ports in Kent and thence across Europe. Gold from Ireland was also transported via Anglesey and Christchurch Bay and then tracks crossing Weyhill on its way to Kent. Many drovers tracks also crossed at this point and so it seems that at such a confluence of goods and people that trade had been carried out here at Weyhill even before the Normans arrived.

So what was traded in one of the largest fairs in the country?

Wyhill Fair was one of the largest and most important sheep fairs in the country trading at its zenith 100,000 sheep a day. The fair also traded large numbers of pigs, horses and cattle. The hop fair saw the Farnham hop growers arriving in mass and they had a row of stalls which became known as the Farnham Row. They travelled via Alton joining up with growers from Bentley, Binstead and Froyle. The cheese fair saw cheeses brought from the counties of Wiltshire, Somerset and Gloucestershire. The fair was also a great place for hiring skilled and unskilled workers, it was one of the largest hiring fairs in the country, with a custom known as ‘Mop’, in which the disengaged person is stood in a prominent position displaying an article of their profession. Hawkers selling all manner of trinkets and entertainers of all kinds would have taken advantage of all the people coming to the fair. Gambling on the outcome of dog and cock fighting and bear baiting was common and duels and jousts were committed to by headstrong and possibly beer full traders. Stalls for the traders and pens for the animals, food stalls and inns, permanent and tented structures, the fair would have been a crowded and exhilarating experience. The site of the fair

The land of Blissimore Hall Acre was thought to be the site of the original fair. Blissamore Hall lies tothe north of the fairground in the hamlet of Clanville. In 1246 a duel was fought over its ownership between William De Devenys who owned the land and William Cotele who thought he did. Devenys lost both life and land showing what a valuable asset it must have been. The fair extended westwards from the church of St Michael and All Angels towards Fyfield. Nearby Ramsbridge Manor, north of the fairground seems to have been associated with the fair. An ancient manor, it was once owned by Geoffrey Chaucer 1340 – 1400, author of ‘The Canterbury Tales’ and land belonging to the manor was once used for the fair. Chaucer may have been inspired to write his book based on people he encountered at the fair who were passing through Weyhill Fair whilst on pilgrimage. The Harrow Way was part of the route pilgrims used to travel to Canterbury. Queen Elizabeth I was a patron of Ramsbridge House when , in the C16th it became an almshouse. She writes a letter in 1554 to Sir William Cecil in which she mentions that there has been a fair at Weyhill for 400 years. 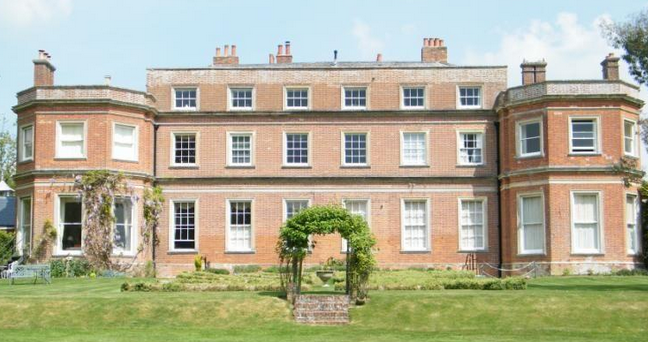 A quaint ceremony is associated with the fair called ‘Horning the Colts’ thought to have its origins in paganism. Strangers and newcomers were taken to one of the many inns after dinner and presneted with a vessel made of a pair of ram’s horns mounted in silver with a silver cup inbetween them capable of holding a pint of liqour. Below is a grotesque head with open mouth. After dinner the landlord would ask “Are there any colts to be horned?” The newcomers would come forward and the filled vessel placed on his head. The following was then recited;

As fleet runs the hare, as cunning runs the fox,

Why should not this live calf grow to be an ox?

For to get his living midst the briars and the thorns and to die like his daddy with a long pair of horns.

The horns are removed, the liquor drunk and the colt is then admitted to the privileges of the parish and the fair. 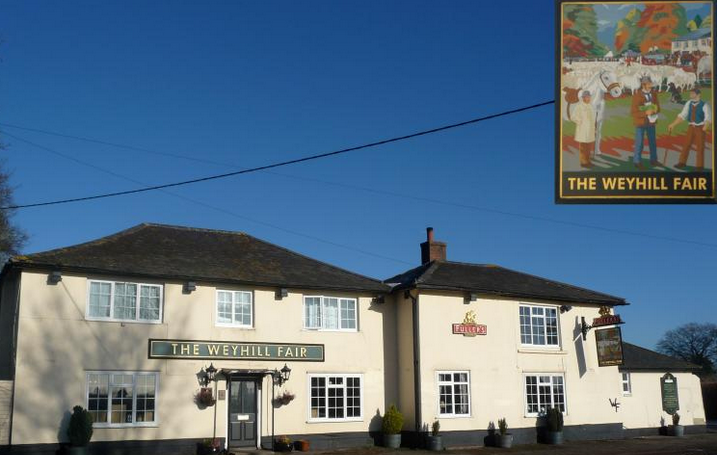 One of the many inns that served Weyhill Fair, was once the Sun Inn

The Court of ‘dusty feet’

The fair had grown to such an extent, with vast sums of money exchanging hands, that by the C16th, a court was established at the fairground to deal with disputes. This court was named the Court of Powder Pie, its name came from the French for dusty feet ‘pieds poudres’, alluding to the fact that it dealt with the disputes of travellers.

You could even sell your wife at the fair

The annual register of the fair for 1832 records Joseph Thomson offering his wife for sale for 50 shillings, he didn’t quite make that but accepted 20 shillings and a dog!  In Thomas Hardy’s novel ‘The Mayor of Casterbridge’, written in 1886, Hardy describes how Michael Henchard, after becoming drunk at the Weyhill Fair (called Weydon Priors in the book), sold his wife to a sailor for five guineas. 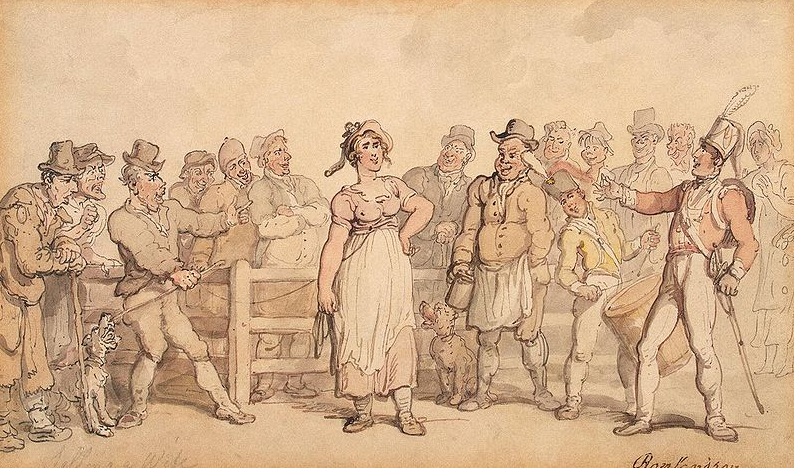 The decline of the fair

From the end of the Napoleonic War in 1815, the fair began to decline with fewer and fewer people attending or selling their wares. Fifty years later, animal sales had fallen rapidly as improved transport and other communication links made such large gatherings of people and goods unnecessary for business purposes.