In the church of St Mary’s Hayling Island are two fine examples of Medieval ship graffiti. For those of us (myself included) who know little to nothing about ‘ship graffiti’ it might seem surprising to see images of ships carved into the ancient stone of our churches.

The fact that there are hundreds of these ship images up and down the country may be even more surprising and then to find out that such graffiti is not found just in churches close to the sea but many miles inland may seem stranger still. Turning to Matthew Champion’s book ‘Medieval Graffiti’ to guide what the observer is seeing, the images found at Hayling begin to reveal themselves. 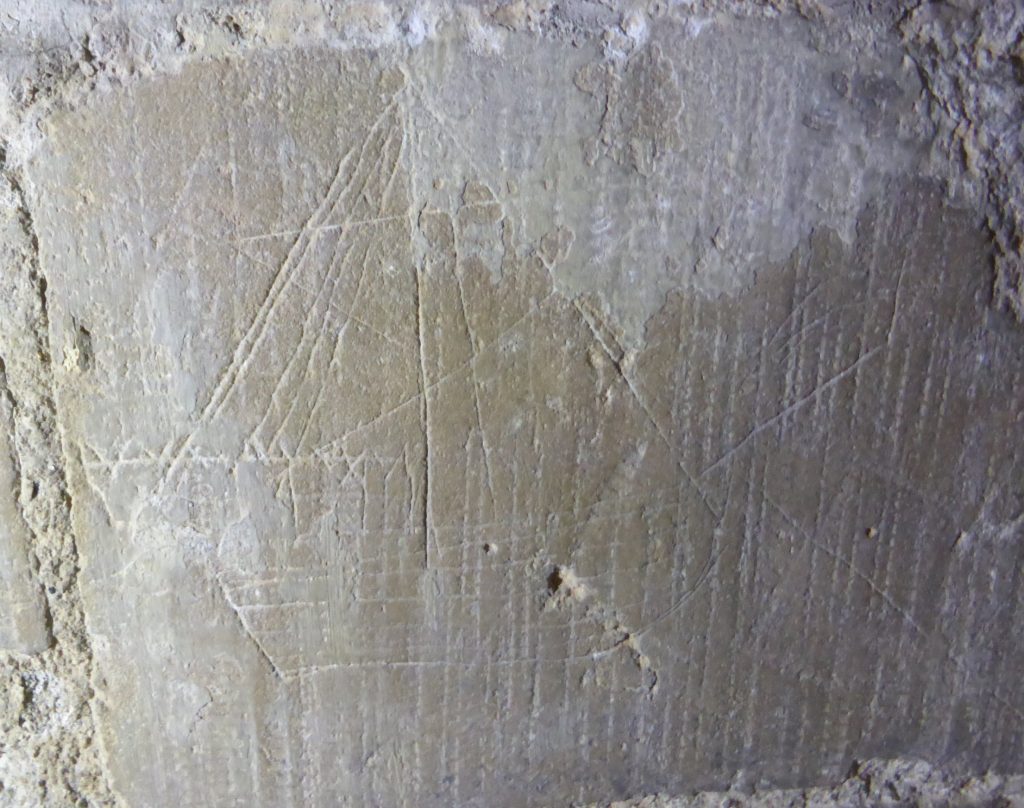 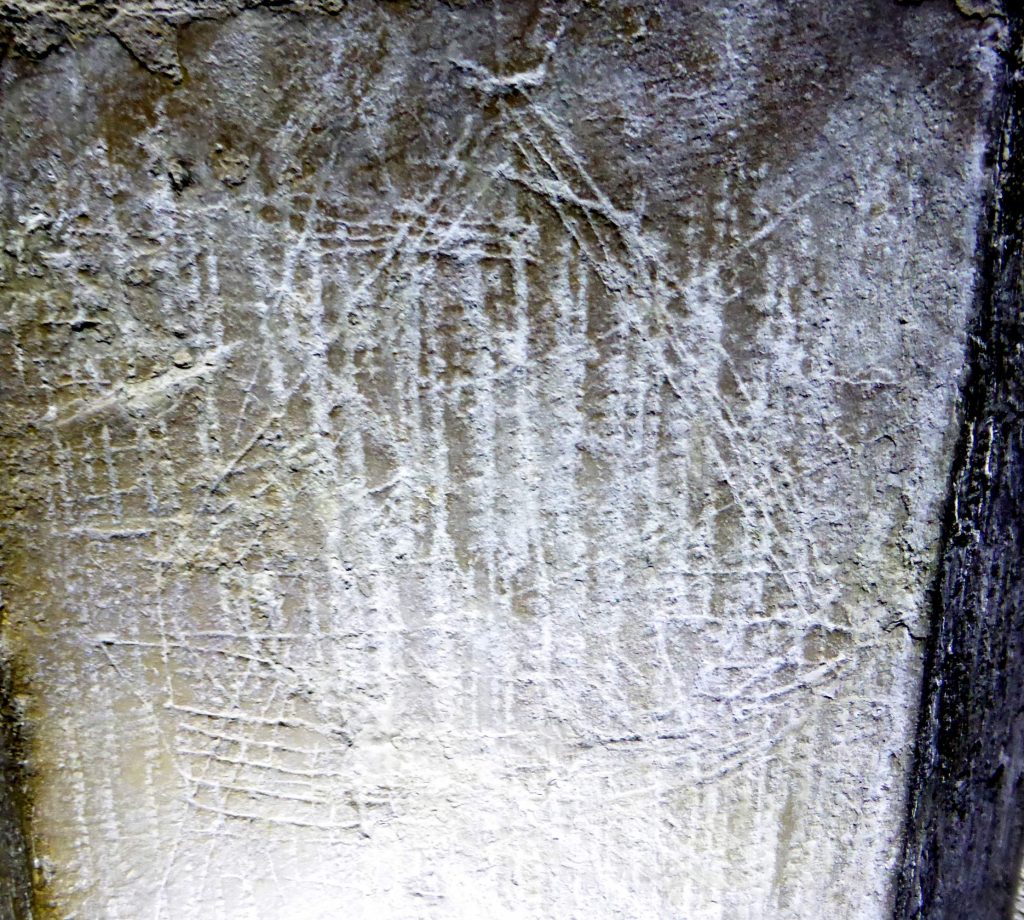 Why are there images of ships in our churches?

It would seem quite logical to assume that the ships were drawn by sailors or their families to act as some kind of protection for them whilst they are at sea but as Matthew Champion tells us the evidence collected from hundreds of examples might suggest that such an interpretation is too simplistic and that the data shows us that the images all seem to be quite similar and so I thought I’d look in detail at the Hayling examples to see if they fitted what others report. Obviously Hayling is by the sea so if we go looking for ship graffiti it’s a good place to start.

There is a relationship between the idea of the church as a ship, the ‘nave’ from the Latin term ‘navis’ meaning ship or vessel. Many illusions to the church steering a path whilst those who oversee the church as being commanders. Maybe we have forgotten the importance of ships to this island nation, to trade and good fortune? Model ships were also often presented to the church and can be seen hanging in the aisles and I was reminded of several seen in Hampshire, one at Warsash the other more obviously displayed in Portsmouth Cathedral. These are more modern ships but Matthew Champion relates that church ships were a common thing in the Medieval church but the majority were of course lost during the reformation. There is much, much more to be considered regarding ship graffiti so here are some articles from far more learned people on the subject.

Past Horizons. Ship Graffiti in Medieval Churches – an article by Matthew Champion 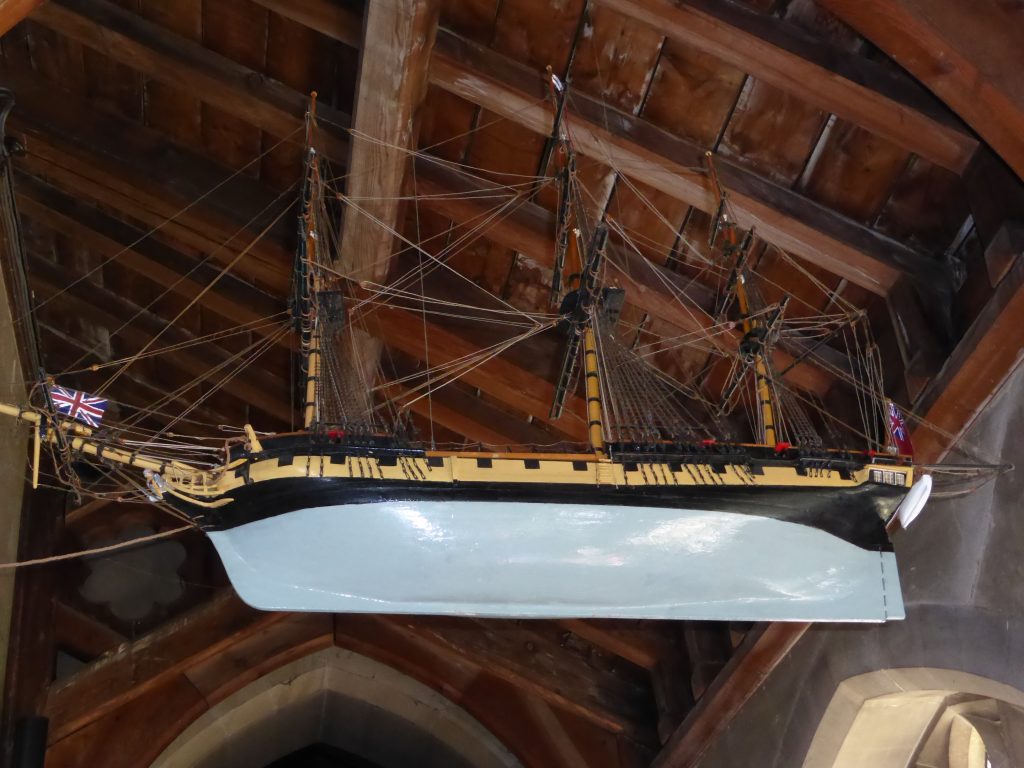 The ship that hangs in Warash church

Both of the Hayling images are crudely drawn one more so than the other.

The two examples we have are both in profile and ‘out of the water’.

Both have a single mast and a crows nest is obvious on one of the images but less so on the second however a closer look reveals what appears to be a U shape at the top of the mast.

Obvious on one of the images, the other less easy to make out but the rectangle running from the bow back has the short vertical lines described so with a bit of persuasion this could be a furled sail? 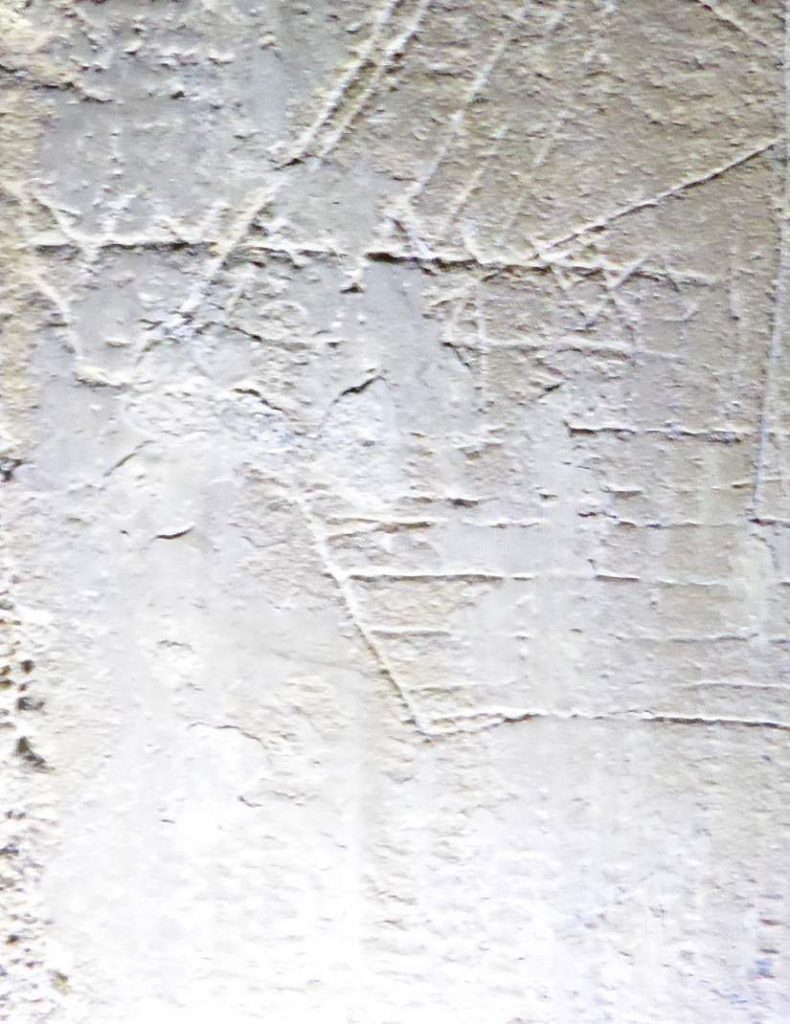 Both images show the hull in simple outline but both also show the planking on the hull.

No obvious sign of an anchor attached to the bow on either image from the photos taken thus far.

The Hayling ships quite clearly show the planking on the ships side. 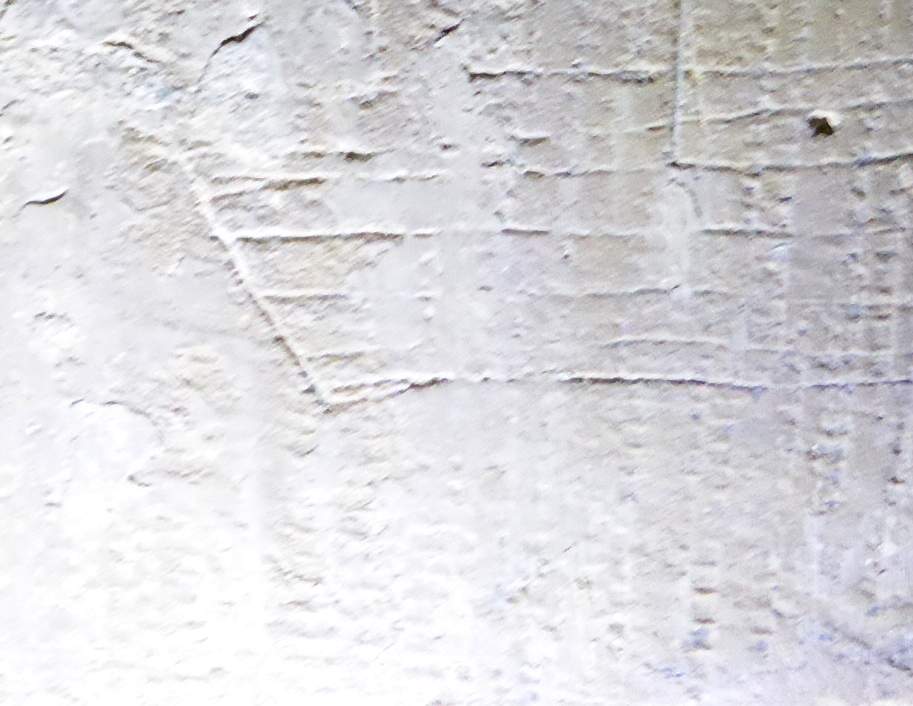 No one knows why so many churches contain ship graffiti

And it is possible there are many reasons why images of ships were carved into the stonework of our churches. It may have to do with asking for the safe passage of loved ones or the safe return of a particular ship, we maybe no longer understand the importance of ships and trade to the nation or the explanation may lie in a more ethereal idea of the ship and the mother church.

In Medieval times, St Nicholas was patron saint of those in trouble whilst upon the high seas and so maybe once upon a time the south aisle was dedicated to the saint and the images associated with the cult that grew up around the saint. Whatever the reason, we continue to record the faint remnants of something we no longer understand and give time to think about another time when such images were a very real and important part of peoples everyday lives.