Saxon sundials are rare, the Corhampton sundial is both rare and beautiful 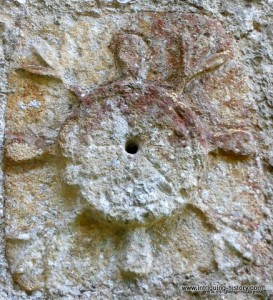 Hampshire is home to one of the best preserved Saxon sundials in the country, set into the wall of Corhampton Church, it transports us back to a time when the day was not measured in hours past but in ‘tides’ of the day.

The day in Saxon times was divided into eight ‘tides’ each approximately three hours long. The tide dials were for either secular or ecclesiastical use,allowing either workers or monks to know which tide they were in.

The Corhampton sundial appears to be made from a red stone and therefore would not have been found locally. The eight tides can be seen quite distinctly as can the hole at the centre where the gnomon would have been positioned. The gnomon would probably have been made from metal.

The tide dial could well have been in use from the time St Wilfred was in the Meon Valley circa 680AD, until the Norman conquest when the use of such dials seemed to fall away.