The narrative of events in the period c.600 is a problematic area as it really doesn’t amount to a great deal, therefore at the time when Cynegils came to power in Wessex in AD 611, it would be fair to say that not an awful lot is known about him or his family.

King of Wessex was a loose title, as the Kingdoms with which we are so familiar with had not yet been formed. The later kingdom of Wessex was centred on the counties of Hampshire, Dorset, Somerset and Wiltshire but in the time of Cynegils, the Anglo Saxon Chronicle points to its boundaries being further north, in the area of the Upper Thames.

Cynegils certainly came from a long line of powerful warlords but just exactly who his father, uncles and brothers were remains a bit of a mystery, depending on which Saxon source you read. It is probable however that the large area of Wessex was ruled over by several members of the same family. The suggestion is that his son was Cwichelm and that he controlled Wessex with his father.

Their reign was dominated by invasions and counter invasions from neighbouring kingdoms, they made pacts with the Mercians and fought the Northumbrians at Win and Lose Hill in Derbyshire, where they were defeated.

It was a weakened Wessex that received the Italian missionary Birinus, who had come to convert the people of Wessex to Christianity.

his palace at Cholsey Berkshire. It was at this point that there seems to have a turning point for Wessex under the control of Cynegils. It was the arrival of a new King of Northumbria, Oswald who sought peace with Wessex that served to persuade Cynegils to accept Christianity.

By all accounts this is a pretty remarkable feat when all is considered. This warring king, desperate to keep hold of and strengthen his 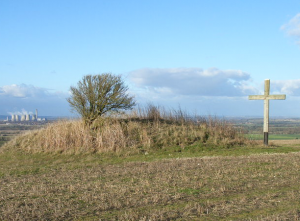 kingdom, first allows a foreign missionary leave to preach a new religion and when he shows sceptism, receives and listens to his arch enemy who persuades him to convert and to give Birinus the old Roman town of Dorchester-On- Thames within which to build a cathedral.

After a marriage between  Cynegils’ daughter, Cyneburga and Oswald, most of the Royal family were baptised in the Thames, between Brightwell and Dorchester.

Wessex emerges as a strong and secure kingdom, the date is AD 634

Cynegils continued to fight the Mercians and the church at Chilcomb near Winchester, of the early Norman period and little altered was built on the site of  an earlier Saxon church. When Cynegils, King of Wessex, celebrated a victory over the heathen Mercians he granted the large manor of Chilcomb to the Church. This was confirmed in 908A.D. in a charter granted by Edward the Elder son of King Alfred, a copy of which hangs on the south wall of the nave. The manor sits on rising ground with a clear view of five miles to Winchester Cathedral. 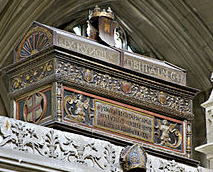 Cynegils died in AD 643 and it is thought he was buried in Dorchester but along with other Anglo Saxon kings his remains were later translated to Winchester and are thought to rest in one of the mausoleum boxes in Winchester Cathedral.