Southampton 1337 the 100 Years War, how did it affect Southampton?

Southampton has been a town that has seen its fortunes wax and wane over the centuries. The period following the Norman conquest was certainly one of its most important, the founding of a powerful merchants guild and probably through this, its charter, gave Southampton an economically sound future, or so it thought. For about 150 years the town became a cosmopolitan centre of trade until the year 1205 when an event occurred that  forced the town of Southampton into a very different role. King John lost the Northern lands of France, Normandy, Anjou, Maine and Tourainne and Southampton turned from trading port to military town.

The south coast was threatened over and over again by French fleets, the channel became the setting for the frequent fierce hostilities that erupted between the two nations and Southampton became a fortress, a medieval stronghold.

The town was itself threatened by the French fleet on numerous occasions, several times attacked, once taken and almost destroyed.

When King Edward III claimed the French crown in 1337, as the grandson of  Philip IV, the French emphatically rejected it. They used salic law to to oppose the claim that he had through his mother Isabella (no woman shall inherit the throne). Instead, they upheld the rights of Philip IV’s nephew, King Philip VI.

This act, along with the repeated attacks on the south coast of England, set the Hundred Years War into motion but it was the fatal assault, made on the morning of 4th October 1337, upon the town of Southampton, that was one of the immediate inciting causes and threw England and France into an expensive and protracted affair.

The French could not muster a large enough of a fleet on their own. They had to employ Genoese mercenaries to fight alongside them. It  was never an attack that would overthrow the country but it had an immense effect on Southampton and the county of Hampshire. 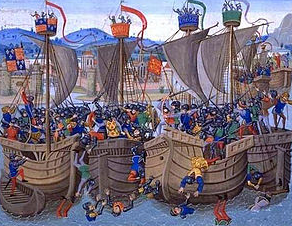 It is said fifty galleys attacked and once onshore, the French and Genoese set fire to the town and destroyed the King’s apartments. There was hand to hand fighting but the inhabitants of Southampton, quite rightly feared for their lives and fled. The town was left in a state of ruin but given its strategic position, could not be left unprotected.

The burgesses, who had had previously derived a substantial income from commerce in the town, now found themselves being asked to spend money to keep the fortifications in good repair. The town was fortified on its seaward flank to withstand further assaults from the French.

The King struggled to take control of the seas but in 1340 at the Battle of Sluys, he bloodied the nose of the French and by 1345 it is said he mustered an army of 32,000 in Southampton, although quite possibly the figure was closer to 15,000 men but  Southampton stepped forward, supplying twenty one vessels and 576 mariners. The result was the Battle of Crecy, a decisive battle in the war where the English routed a much larger French army.

Still, over thirty years after the sacking of Southampton, the town had failed to recover its previous good fortune and the burgesses begged the King leave to be excused the duty of maintaining the town’s fortifications. They were refused and in 1377 they were glad of it as once again the town was attacked but this time they were able to fight off the French.

The town was still not done with the hundred years war, its fortunes changing during this tumultuous period of English history.