King Alfred the Great, May He Finally Rest?

The year is 899AD and the Anglo Saxon Chronicle records quite simply that, ‘In this year King Alfred died on 26th October’

In the last 1115 years, King Alfred the Great has had a number of referenced resting places but as to his final resting place? Well maybe we now have some answers. William of Malmesbury, a C12th historian, who spent his entire adult life in Malmesbury Abbey in Wiltshire, records that Alfred was first buried in the Old Minster because the New Minster was still being built.

The move to Hyde Abbey

King Alfred was left to lie in peace until 1110 when Bishop William Giffard, made a decision to move the New Minster to Hyde, which lies about a kilometre north of the present cathedral. This decision was a major one but constraints on space on the sites of Old and New Minster and problems with drainage made it seem a reasonable solution.  The remains of King Alfred, his wife Queen  Ealhswith, who died at Nunnaminster but was buried alongside her husband at Old Minster and their son King Edward the Elder, were taken in procession accompanied by monks from the New Minster to Hyde Abbey. The Rout of Winchester Hyde Abbey

The force of the civil war between King Stephen and Matilda was felt in Winchester in 1141, during a period known as the Rout of Winchester. In the battle that ensued the suburbs of Hyde destroyed and the abbey damaged but the tombs of King Alfred and his family survived.

King Alfred remained peacefully at Hyde Abbey until 1538, when under the Dissolution, the abbot surrendered the abbey. The abbey estates were given to Henry Wriothsley, later Earl of Southampton, he leased the abbey to a Richard Bethel who destroyed the church. What happened at this point is open to conjecture, the tombs were very probably opened to remove precious metals that might be held within them. It is believed that the bones of the royal family remained within the tombs at this point. 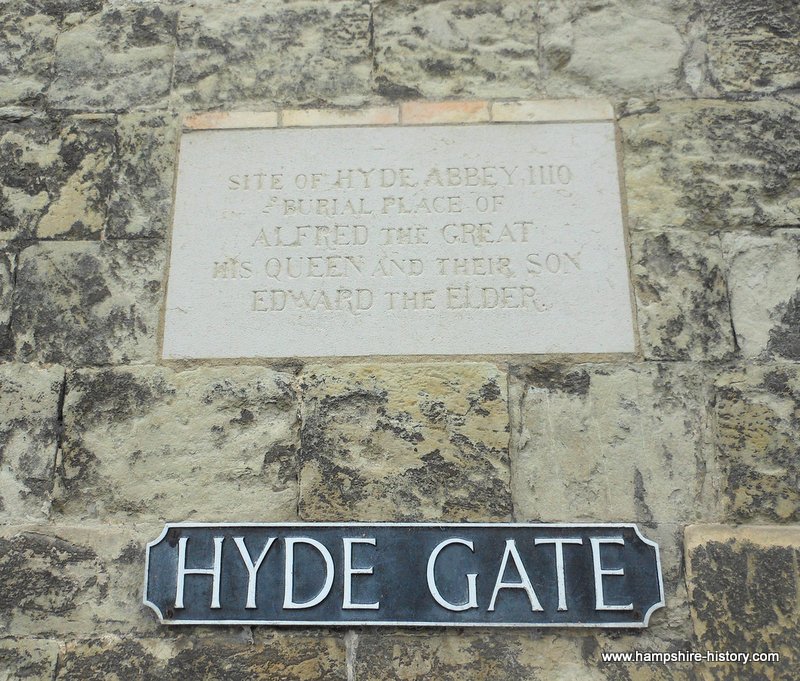 The plaque at Hyde Gate

The story picks up again in 1787 when a significant part of the ruins of Hyde Abbey were purchased to build the County Bridewell and now begins the description of what was found as the land was prepared for construction. The church foundations were noted and in front of the High Altar, a great stone coffin was found along with another two. A Captain Henry Howard, who was in charge of those working on the site also happened to be an amateur historian and he wrote about what he had been told concerning the treatment of the tombs, in that they had been stripped of their lead and the bones scattered. He believed the tombs to be that of the royal family.

The story moves to the C19th

Alas poor King Alfred is not to be left untroubled. The Bridewell was removed in the late 1840’s and in 1866 a man named John Mellor, another amateur historian of dubious background, got permission to ‘dig’ the abbey site. He found five skulls in a vault eight or nine feet deep and also claimed to have found other royal artefacts. These remains were placed in boxes and taken to St Bartholemew’s church, opposite the gateway to the old abbey. The remains were re-buried here but no inscription placed with them, just a simple cross and so have remained. 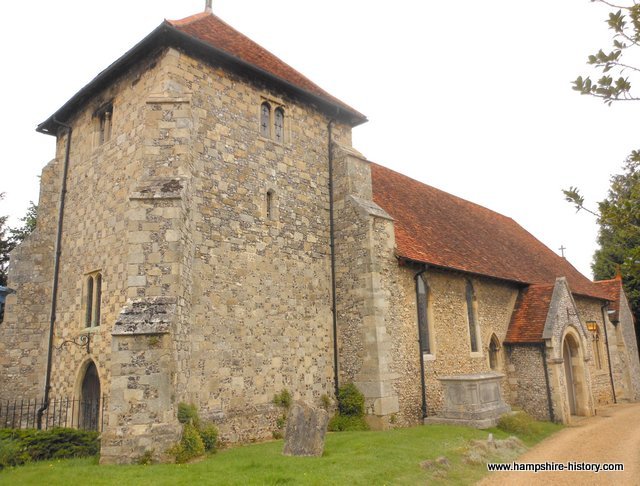 Excavations of Hyde Abbey have been undertaken in the last 20 years or so, the site of the three graves were identified and a garden memorial now exists on the site. The remains in St Bartholemew’s church have been the source of much speculation and following the discovery of King Richard III’s burial in the summer of 2013, it was decided to remove them from the church and a full investigation undertaken to ascertain whether or not they were remains of the Anglo Saxon royal household.

The results are in January 2014

The results of the investigation on the remains in Hyde Abbey, are to be part of a documentary series but the news release has revealed them to be Medieval in date and therefore not the Anglo Saxon royal family. Not willing to give in too easily though, the team from Winchester University re-examined bones unearthed in a 1999 dig at the abbey’s high altar and in a cupboard box in Winchester Museum they examined a piece of a human pelvis, that they believe could only belong to one of the two kings because of the position the bone had been excavated from, in front of the high altar. So will King Alfred the Great finally be able to rest in peace? All will be revealed in the documentary but it would be nice to think that one of England’s greatest monarchs could finally be left to rest in Winchester. See the Treasure’s of Hyde for more information.