King Alfred the Great fought many battles against the Danes and having eventually defeated them, set about restoring a society where learning, law and order and peace would thrive. Of utmost importance to him was re-establishing the importance of the church. In Winchester he prepared for the foundation of two religious houses, one a monastery for monks, the other an abbey for nuns.

The nun’s abbey or the nun’s minster,  Nunnaminster, was founded by King Alfred and his wife Queen Ealhswith. It was a Benedictine rule and closely connected with the royal household. Nunnaminster and its attendant domestic buildings and grounds, occupied a site at a south eastern end of the High Street and covered quite an extensive area, stretching out towards Wolvesey Castle. Excavations in the area show how the abbey was rebuilt and extended over time.

The original Nunnaminster built in 903AD

Excavations have shown that the original building was of wood and had a double aspidal. See in the image the red tile picks out the walls of this early building. A tomb was found in the southern aspe of this building which is thought to be that of St Edburga, grand daughter of King Alfred. After Alfred’s death, Queen Ealhswith lived in the Nunnaminster and died there in 902AD. Her final resting place however was with King Alfred at Hythe Abbey. 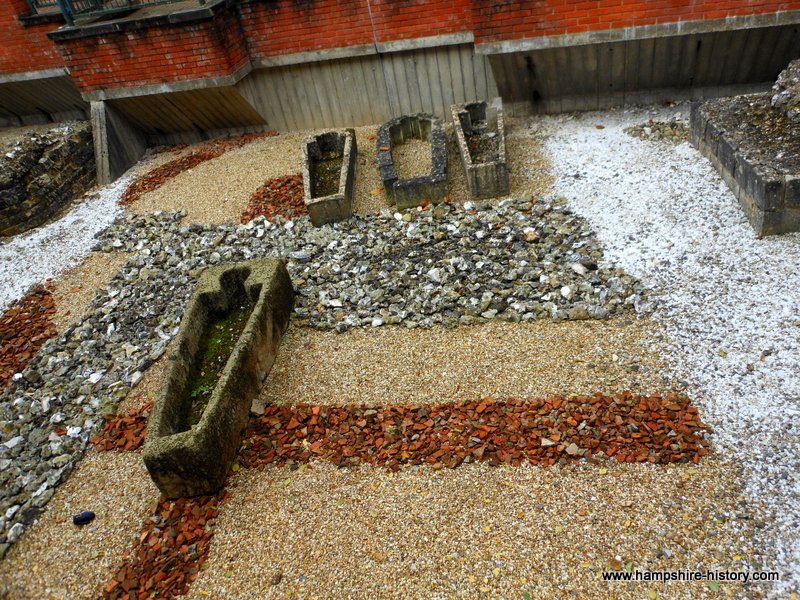 Red tile marks the original building, the flint, Ethelwold’s Abbey and the chalk the Norman.

By 964AD the wooden abbey had fallen into a very poor state and as part of Bishop Ethelwold’s works to reform Winchester’s religious houses, he re-built the abbey in stone and this is shown on the ground, marked out in flint. In terms of the total size of the abbey little had changed. It is thought that St Edburga’s tomb was moved to sit in front of the high altar at this time. During this period it also acquired Abbey Mill.

The Norman’s built and re-built many religious establishments on a grand scale and the Nunnaminster was not spared. In about 1108, it was re-built in the Romanesque style, so that it occupied a much larger site and had great columns dividing new aisles from the nave. The original Saxon building had all but disappeared and the Nunnaminster was re-dedicated to St Mary and St Edburga.

The demise of the Abbey

The abbey was never very wealthy but during the C15th and early C16th it supported a community of over a hundred nuns and workers, with a hospital and a well regarded school. In 1539, during the Dissolution it surrendered and the Abbey ceased to operate. After over five hundred years of service, Nunnaminster no longer served a purpose. C18th Abbey House and its gardens now stand on the site of the Nunnaminster and is a fitting residence of the Mayor of the ancient city Winchester.