Hyde Abbey Winchester, home to the monks of New Minster in a post norman conquest world but also resting place of King Alfred the Great 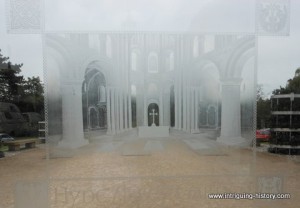 Could the final burial place of one of England’s most influential and charismatic monarchs, King Alfred the Great have been Hyde Abbey in Winchester? In all probability the answer is yes but was it his last resting place? The answer is probably no.

A visit to Hyde Abbey may come as a disappointment to the visitor. The site is tucked down amongst residential streets close to the centre of Winchester but there is little to see.

The beautiful etched glasswork by the artist Tracey Sheppard is the exception and thanks to it, we are able to understand what Hyde Abbey must have looked like.

In 1110, after the Norman Conquest, a new cathedral was built in Winchester and the monks of New Minster had to find a new home. King Henry I founded Hyde Abbey in the same year. 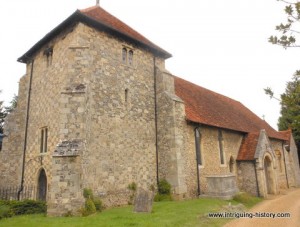 They moved to a location just outside the city walls, Hyde Mead, thus founding the Abbey of Hyde. They took all of their books and relics with them, including the bodies of Alfred the Great, his wife Ealhswith who died in 905 and of their son King Edward the Elder in 924. Alfred was on the move again.

It is believed that the bodies of this Royal household were laid to rest before the high alter of the great stone church and the Abbey became a popular pilgrimage destination.Various things are known about burial of King Alfred.  When he died on 26th October 899, he was buried in Old Minster, Winchester but this did not remain his resting place.
Alfred the Great had intended to build a monastery,next to Old Minster but had only got as far as buying the land before he died. His son Edward the Elder continued  his fathers work and the Monastery was completed in 901. Edward had his father’s body moved to the New Minster which became a Benedictine house in 963.

Hyde Abbey continued to perform its function until 1538 when John Salcot, the last Abbot of Hyde, surrendered the Abbey to Thomas Wriothesley, Henry VIII’s Commissioner for the dissolution of Hampshire’s monasteries.

So what of King Alfred’s Remains?

The great abbey closed its doors, securing the bodies of earlier kings safely inside or so it was thought. The site eventually became the city gaol and it may have been at this time that the three royal graves were desecrated. A contemporary account suggests that when the gaol was built the abbey remains and those of the graves were uncovered but the bones inside them were tossed aside. When the site was investigated by archeaologists in the late C20th, the three royal graves were located but each was empty. It is possible That King Alfred and his family were moved to St Bartholemews, the parish church and in recent months an unmarked grave has had its contents removed to safe keeping for further investigation.