The ‘Bloody Heath’ and Cerdic

The southern coasts of Hampshire appear to have been a magnate for adventurers wishing to plunder the native peoples and it is quite possible that when when Cerdic and his son Cynric landed at the mouth of the River Itchen that this was exactly what they were about but they returned, with a determination to subdue the Britons and claim the kingship of Wessex.
The mystery lies in where they came from. The Anglo Saxon Chronicle describes them as ealdormen, thus suggesting that they had a previous role in a settlement somewhere in Britain and it is quite possible that they held a position of some standing at the time of the retreating Romans and that this incursion along the southern shore was a bit of muscle flexing to assert power in this area.
Cerdic, may have wanted to test the might of other Saxon chiefs in the area and assert his superiority which, if he was successful would have enabled him to claim ‘kingship’. 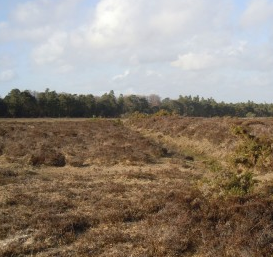 In 501 Cerdic attacked Porchester but did not capture it.

A more determined attack was made in 508 but this attack not just of the ‘Gewissas’, West Saxons but of the Jutes and South Saxons as well. Again the chronicle records this as a mighty battle in which 5000 Britons and their leader, died. The leader is thought to have been a man called Natanleod. Still no occupation seems to have taken place until 514, when the area around and to the north of Southampton Water was taken.

It appears that in 519 Cerdic invaded a little further up the coast at a place called Cerdices-ora, thought to be in the area of the modern day settlement of Calshot, where they pushed the remaining Britons back to New Forest, using the Romano British road from Lepe across Beaulieu Heath. The modern settlement of Charford is thought to have been the scene for this battle. Beaulieu Heath was known as the ‘Bloody Marshes’ right up until the C18th and it is thought that this name alluded to the battle that took place there.

Whether Winchester fell before or after this battle is not known, but once it had fallen Cerdic and Cynric became the first kings of the Kingdom of Wessex.