The life of Thomas Wriothesley and the county of Hampshire are intrinsically linked but just who was this man whose character and demeanor saw him rise through the court of King Henry VIII ? What made this man rise to be Chancellor, Knight of the Garter and elevate him to be Hampshire’s (Southampton’s) 1st Earl?

The family Wriothesley, formerly known as Writhe, until one of Thomas’s ancestors thought it was not grand enough, was a family who had set their cap on fame and fortune. They were variously, heralds, officers of arms and ingratiated themselves with the rich and powerful. They were a family on the rise and each successive generation made sure of their position of influence within the royal court.

Sir Thomas was the eldest son of William Wriothesley, an officer of arms at the College of Arms who married Agnes Drayton of London. His grandfather recorded the dates of the baptisms of his grandchildren and recorded their godparents, a brace of dukes and earls. Thomas was born on the 21st of December 1505 and had a number of brothers and sisters, who all made influential marriages.

Thomas called to attend the King

It was at this time that Thomas was asked to attend the King and at this point he seems to have impressed Henry because he remains with the King at Windsor becoming increasingly involved in legal and secretarial work using his growing influence to secure large grants out of the lands of the dissolved monasteries. 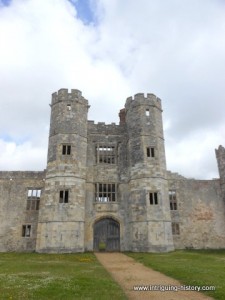 This period for Thomas was the point at which his fortunes truly turned and his connection with Hampshire made.

In 1538 despite Bishop Gardiner’s opposition, Wriothesley was returned to parliament as one of the knights of the shire for the county of Southampton.

This book was acquired for the Royal Library  as late as 1892 on behalf of Queen Victoria, it is in the Garter Book of Thomas, largely written by him with updates by his successors. The Royal Collection citation states that it is possibly the first image/view of the opening of parliament from 1523. in the related Royal Collection article Wriothesley, the King and the main players are identified here, This document alone gives us some idea of his elevated status and what a document to have survived.

Henry possibly used Wriothesley as part of a reactionary policy, in which Thomas became increasingly involved, he actively pronounced sentences of torture and pillory. These deeds made him many enemies and with this thought in mind maybe,that in 1546, he announced the death of his King, Henry VIII to parliament.

The death of the King left Wriothesley in a very vunerable position and when Somerset was made Protector, Thomas scrambled to make his voice the dominant one in the new order of things but people distrusted him and his ambitions. He became arrogant and high handed and faced criticism for his abuses of authority where he was accused of issuing a commission without a warrant or consulting his fellow executors, whilst trying to relieve himself of a large part of his legal duties which led to a brief spell in prison and a hefty fine. When young Edward VI was crowned in 1547 Thomas held the Sword of State, then had it taken away from him for misconduct. Although, Thomas was later reinstated onto the Royal Council. Whilst serving as a member of the Royal Council, he became 1st Earl of Southampton.

He continued in his intrigues against Somerset but he was never to hold the power he had under Henry VIII and became a disillusioned man. He died at his London home Lincoln Place in Holborn, and was buried at St Andrews Church Holborn initially. His body was later removed to Titchfield, where a great monument was laid out above him.

Thomas Wriothesley (1st Earl of Southampton) led a life of self-aggrandisement, that is true but he held true to certain values whatever master he had. His religious bent seemed to sway depending on the current politics between Catholisism and Protestantism, but he was not the first or last to whom that would apply. He was certainly quick to profit from the dissolution of the monasteries but ultimately his position accrued him more wealth than respect. His son continued the connection with Hampshire and raised the ‘Titchfield Monument’ to commemorate the lives of his parents and himself.