Hampshire Churches and Their Treasures No 14 East Worldham

Who is the C13th lady who lies in East Worldham church?

The lady lies in elegant repose in East Worldham church and has quite possibly been lying here in the same place for over 700 years but who is she?

The semi effigial slab is positioned in a low recess in the south wall of the nave of the church and the style of clothes suggests a person who was alive at the end of the C13th. The style of the monument points to a substantial family in the area and the manor of East Worldham was held by the de Venuz family for several centuries from the time of the conquest to the mid C14th.

The suggestion has been made that she is Philippa Roet. This would be thrilling as she was a fascinating Medieval woman who married below her station when she became the wife of the poet Geoffrey Chaucer. She was sister to Katherine Roet mistress of John of Gaunt who then became his wife. That would be incredible if it was true but alas, the dates of both monument and style of clothing do not point to it being her. She died in 1387 and it is thought this monument was erected sometime at the end of the C13th. 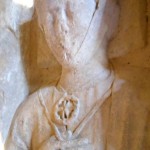 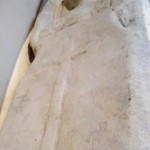 The reason it has been suggested that the figure might be Philippa is that there is a link between the manor of East Worldham and the Chaucer family.. Thomas Chaucer, son of Geoffrey and Philippa married Matilda, daughter of Sir John Burghersh. Sir John was the nephew of Henry Burghersh Bishop of Lincoln. In 1329 the manor of East Worldham passed out of the hands of the de Venuz family to the Burghersh family and hence into the hands of Thomas Chaucer who was Speaker of the House of Commons and Chief Butler of England for almost thirty years. He was first appointed by Richard II.  Henry IV, appointed him constable of Wallingford Castle and he served as High Sheriff of Berkshire and Oxfordshire for 1400 and 1403. He attended fifteen parliaments and was Speaker of the House of Commons on five occasions, a feat not surpassed until the 18th century. 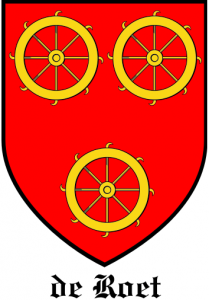 The Chaucer family grave can be seen at the church of St Mary the Virgin in Ewelme Oxfordshire, where it likely Philippa is buried.

Back to the monument

Look closely at the dress, there is a round brooch on her breast and this was thought to be part of the Roet arms. Closer investigation reveals it to be a buckle of two parts, holding the lady’s tunic together. The hair is covered by a headress and caught under the chin with a wide strap. She wears an outer tunic on which her hands are loosely crossed, the thumb of her hand looped behind a cord that closes the tunic. Underneath is another garment which appears to have a textured collar, maybe fur.

The whole monument is of a coffin revealing the lady who lies therein but notice her feet seem to be in an odd position.

It is a very moving medieval monument, gentle and quiet in repose, lying in a church whose position high on a hill with views for miles, is a delightful place to rest for 700 years.