The ship the Mary Rose was named after King Henry VIII’s favourite sister Mary Tudor, who, ironically was once the bride of the King of France Louis XII…

The building of the Mary Rose was a critically important action in the reign of King Henry VIII who invested heavily in guns and fortifications. The threats of an invasion by France and Spain dominated much of his reign.

King Henry VII built the great dock in Portsmouth in 1495 and it was there that the ship the Sovereign was ‘docked’ in 1496. It is therefore unsurprising therefore, that King Henry VIII chose to use the dock at Portsmouth to build new war ships to bolster the fleet. 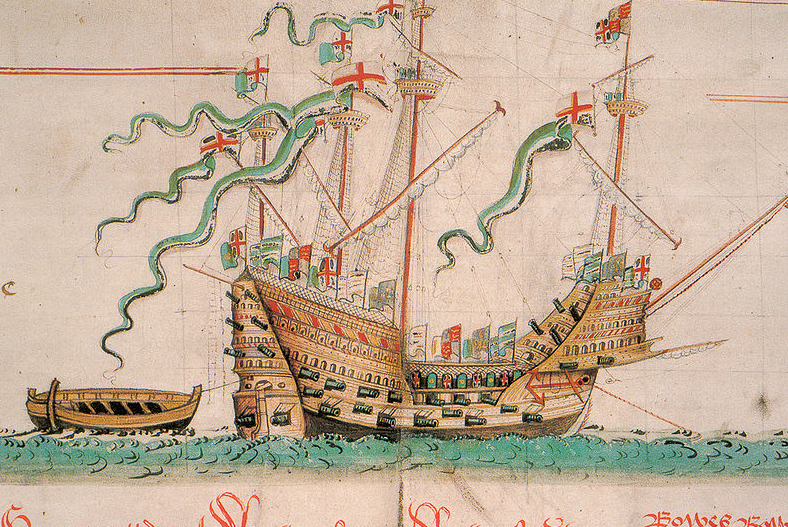 Portrait of the Mary Rose from the Anthony Roll

So what was Portsmouth like in the early C16th?

When King Henry VIII came to the throne in 1509, one of the first tasks he undertook was to ensure that he had sufficient ships and arms to defend against England’s enemies. Between 1509 and 1512, Henry set about building himself a new fleet.

Portsmouth was a small town which thrived in times of conflict, contained by its city walls and thronging with craftsmen, sailors and itinerant workers. It had the reputation of being a rough and disease ridden place but perfectly placed to defend against a French attack.

The Portsmouth hinterland was able to provide all the necessary materials for ship building. The great Forest of Bere and the Wealden forests to the north supplied the massive oak timbers needed to make the ship’s frames. Nails, brackets and bolts came from the iron foundries of the western Weald and closer to home the blacksmiths at Havant forged the nails.

The town would have thrived during the ship building, workers needed accommodation, food, ale and all the other things necessary to while away the lonely evenings, plenty of work for all.

Henry’s first ship was the Sovereign and then the keels of two more ships were prepared, the Mary Rose and the Peter Pomegranite. This was just the beginning  in these three short years Henry had built 9 new ships, rebuilt two others and captured or purchased ten others. The Mary Rose was just one of many in Henry’s new army.

Who built the Mary Rose?

The shipwrights who built the King’s ships were highly skilled and highly prized men. The King placed great value on their skills and so it is no surprise to learn that they were  given bed and board, they had a coat allowance and 2 1/2d per day for bread, beef and ale. Cooks prepared their food, chambermaids made their beds, which were lavish for the time with flock mattresses and blankets.

The men who built the Mary Rose were as well looked after as any servants in the King’s household.

What was the Mary Rose used for?

The Mary Rose was just one of a hard working fleet of ships and some of her movements can be traced through documents such as accounts from the ‘Clerk of the Kings Ships’. From this we know that the Mary Rose was moved from Portsmouth to the Thames in 1511 where through the rest of the year the ship was fitted out with decking, rigging and armaments.

Finally the ship was adorned with banners and streamers, all painted in the King’s colours and moored on the Thames, close to Greenwich Palace and the King’s quarters. She was set for war if necessary but her first task was to protect the Channel and keep it clear of enemy, that is French ships.

The new Mary Rose Museum in Portsmouth provides fantastic detail of the life and times of the Mary Rose.

First battle for the Mary Rose

The Mary Rose became the flagship for Admiral Sir Edward Howard and in August 1512 she left Portsmouth to lead an attack on the French fleet at Brest. The attack was successful, with many French ships and prisoners taken and brought back to Portsmouth. These skirmishes continued with the Mary Rose dominating the fleet. She was refitted in 1536. By 1538 the threat from a combined French and Spanish attack grew to such an extent that King Henry set about fortifying the southern coasts, including the building of Southsea Castle.

The sinking of the Mary Rose

In 1545 the French had amassed a huge number of ships and men with the intention of attacking Portsmouth and destroying King Henry’s fleet in its own harbour. The English strategy would be one of defence and confidence was high.  The details of the battle in which the Mary Rose sank in 1545 can be read in the post The Battle of The Solent. In reality it was not a great battle but more of a skirmish and contemporary reports talk of the Mary Rose heeling, that is leaning heavily to one side. She was heavy with cannon and men, many of them unused to being on a ship and unable to take orders.

The Mary Rose, her gunports open continued to heel, water surged in and she sank, quickly and unexpectedly, in front of her King, with most hands lost. It was an undignified end to one of King Henry VIII’s greatest ships.