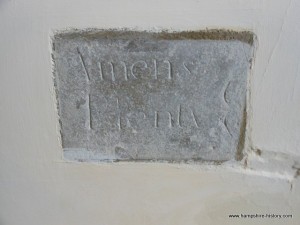 Churches are full of extraordinary items, some of them tucked away in hidden corners…..
Here is number 3 in a series of short posts, on the out of the ordinary artifacts and objects that can be found in Hampshire churches

All Saints Church East Meon, is a marvelous Norman structure, standing magnificently over the equally ancient village and River Meon but inside, in a tucked away corner is a little treasure, simple but full of mystery.

In the east wall sits a small stone plaque with the simple words ‘Amens Plenty’ inscribed onto it. It was originally on the floor of the church and when it was removed, underneath the remains of four men were found. All were buried vertically…..

Local story telling, tells a tale of four parliamentary soldiers, who were part of General Waller’s army, billeted in the village before marching to the Battle of Cheriton in 1644 and who were killed in a local skirmish.

The truth of this will never be known but the soldiers were billeted here in East Meon and it is thought they took the lead from the famous Tournai Font to make shot for their weapons.

Whatever the answer, this plain plaque is a Hampshire Church Treasure