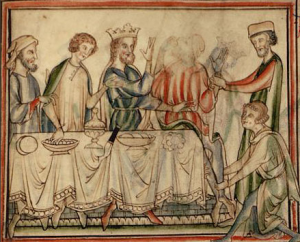 Earl Godwin(e) of Wessex was one of the most powerful men in England before the Norman Conquest and his life is inextricably bound to Wessex and Hampshire.

In 1016 Cnut , seized power. He collected around him those who had shown loyalty to the royal household. Godwin was among their number.  Loyalty was of great importance to Cnut and the positioning of Godwin so close to him, bolsters the argument that there had been a previous relationship between Godwin’s family and the Danes. Mentally astute and certainly charismatic, Godwin was a supremely confident individual. By 1018 he was one of the select few signing Cnut’s Royal Charters.At some point in this period, probably 1022, Godwin accompanied Cnut to Denmark. On his return, Cnut makes him Earl Godwin of Wessex. By 1023 he is appearing on Royal Charters as such. Earl Godwine’s position grew after Cnut gave him his sister Estrid in marriage. She herself was a powerful and forceful woman, apparently  trading slaves to Denmark, especially young women. No wonder then, that the offspring of these two determined and masterful people should turn out to be brutish individuals.

There were two actual contenders for the English throne. In exile in Normandy were the heirs to Aethelraed, the eldest being Aetheling Edward (Edward the Confessor), supported by Robert of Normandy and his brother Afred.

The scene was set for the forthcoming conquest but none was yet to know about the implications this would have on the whole of England.

Earl Godwine then decided to up the game and murdered Alfred, brother to Edward. Meanwhile in Normandy, Robert died leaving an illegitimate heir, William.

Conveniently for Godwine, Hardecnut died soon afterwards. His death though was in extremely suspicious circumstances being seized with convulsions after out drinking with companions. He was very possibly poisoned and the person with most to gain from his death was Earl Godwine.

Godwine died suddenly in 1053, whilst dining at Winchester, legend has it that he choked whilst denying his role in the murder of Edward’s brother Alfred.

His son Harold succeeded him as Earl of Wessex, and  later succeeded Edward the Confessor and became King of England in his own right in 1066. It looked as if Godwine  might achieve his goal and inaugurate a new royal dynasty but it was not to be and instead, Harold was overthrown and killed in the Norman Conquest.

Before 1066 Earl Godwine held the overlordship in Warblington, Chalton and Headley in Hampshire along with masses of land in other parts of Southern England.