Hambledon and Cricket, the two words are synonymous and all those who profess to know the sport will know that this Hampshire village was at the core of the modern game. 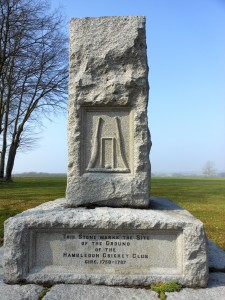 Hambledon cricket, the village is quite entitled to its position in the history books because even if it was not  the place where cricket was first played, it undoubtedly spawned a club who gave the England team quite a drubbing.This little village in 1777 mustered a team that beat the best that the rest of England could gather together together and so its legacy was set in stone.The centre of this cricketing phenomena was the Bat and Ball public house, whose landlord in the middle of the C18th was Richard Nyren who, along with his son John who was born in 1764, formed a hub of enthusiasm, passion and talent around which the club was based.

The setting for the club, was originally Broad – Halfpenny Down, with the Bat and Ball opposite. The link between cricket green and public house still so symbolic of English cricket to this day.
Quite when the game started to be played in Hambledon is unclear but references to the club appear in local newspapers as early as the 1750’s.  One would suppose that even at this time it was quite well established, given the extraordinary talent that seems to have found its way into the team by 1770.
At some point the village club struck out in an altogether different direction. Between 1770 and 1780, there seems to have been a subtle but powerful change in approach, towards a more scientific bent, where technique and training were considered vital. 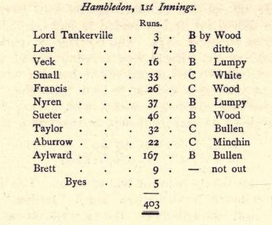 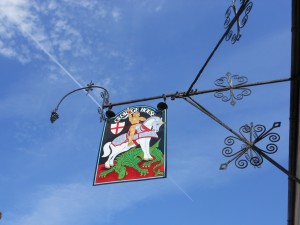 The ground on Broad-Half Penny Down, is still played on and is the home to Broad-Halfpenny Brigands Cricket Club who play regular fixtures there.The Brigands manage the ground and its facilities on behalf of the Broadhalfpenny Down Association which was formed in 1996 by the Brigands and Winchester College who own the ground.

Read John Nyrens book and other matter drawn from various sources, online as an ebook.

Mote, Ashley, ‘The Glory Days of Cricket: the Extraordinary Story of Broadhalfpenny Down’, 1997, Robson Books Limited.

Nyren, John, ‘The Cricketers of My Time’, 1833 (collected and edited by C C Clarke together with “The Young Cricketer’s Tutor” above).