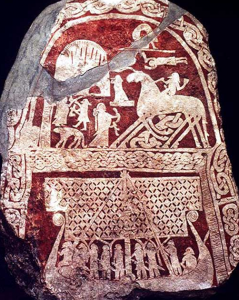 The Anglo Saxon Chronicle records the burning of Wessex towns and mentions specifically the town of Alton, where they came up against a force of Hampshire warriors and Waltham, now Bishops Waltham, one of the towns routed by an invading force of Danes.

These attacks were fierce and unforgiving and being so close to the ecclesiastical centre of Winchester must have struck terror into the men and women of Hampshire.

Here, translated from the chronicle, is the story of that invasion of Wessex in AD 1001

A.D. 1001. This year there was great commotion in England in consequence of an invasion by the Danes, who spread terror anddevastation wheresoever they went, plundering and burning and desolating the country with such rapidity, that they advanced in one march as far as the town of Alton; where the people of Hampshire came against them, and fought with them. There was slain Ethelwerd, high-steward of the king, and Leofric of Whitchurch, and Leofwin, high-steward of the king, and Wulfhere, a bishop’s thane, and Godwin of Worthy, son of Bishop Elfsy; and of all the men who were engaged with them eighty-one.
Of the Danes there was slain a much greater number, though they remained in possession of the field of battle. Thence they proceeded westward, until they came into Devonshire; where Paley came to meet them with the ships which he was able to collect; for he had shaken off his allegiance to King Ethelred, against all the vows of truth and fidelity which he had given him, as well as the presents which the king had bestowed on him in houses and gold and silver. And they burned Teignton, and also many other goodly towns that we cannot name; and then peace was there concluded with them. And they proceeded thence towards Exmouth, so that they marched at once till they came to Pin-hoo; where Cole, high- steward of the king, and Edsy, reve of the king, came against them with the army that they could collect. But they were there put to flight, and there were many slain, and the Danes had
possession of the field of battle. And the next morning they burned the village of Pin-hoo, and of Clist, and also many goodly towns that we cannot name. Then they returned eastward again, till they came to the Isle of Wight. The next morning they burned the town of Waltham, and many other small towns; soon after which the people treated with them, and they made peace.

The Danes quite possibly used the river valleys of the Meon, Test and Hamble to move swiftly through the southern lands and to escape back to their boats if they needed to.
The people of Hampshire could not withstand the onslaught though and the ‘peace’ they settled with them would have been a monetary one, to ensure no further attacks.