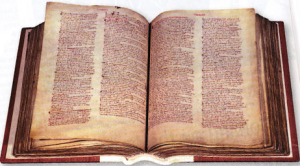 When William the Conqueror planted his two feet firmly on the land of England, it became his personal property and he had every intention of using it to meet his own needs and ends.

He allowed his followers to use the land in return for military service but he regarded it as his, totally.

It is not surprising therefore that in 1085 – 1086, William ordered his ‘Great Survey’ of England to be made. He sent commissioners into every shire to take account of all the lands and cattle. It tallied the lands the bishops, earls and abbots held, the stock and lands held by each tenant and their annual value.

All the returns were sent to Winchester, each great roll copied into a book, until by the Spring of 1086, the completed rolls had all been brought together to form the Domesday Book.

William then took this book to a court, that he held somewhere on Salisbury Plain, at which he demanded the attendance of all landholders of any substance and from them he demanded an oath of allegiance.

They had no choice other than to submit to him.

The most important landowners of Hampshire were; 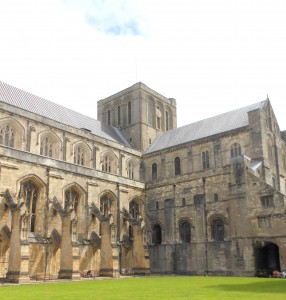 The rest of the manors were held singularly, some by other abbeys or ecclesiastically such as the Archbishop of York who held Mottisfont. Interestingly, chief huntsmen and falconers also held manors which shows the importance the royals placed on the sport of hunting.
Others who held various houses, hides or indeed manors,were members of the royal household, such as the barber surgeon and physician. These people were held in high regard by the Royal family in the C11th and that is of no surprise, life could be very short and unpleasant and illness drew no distinction between prince and pauper.

People with Saxon names do not appear in large numbers but a good number of Saxon thanes held land from the King,particularly in the Isle of Wight, for which they had to fight in case of war, and repair local fortifications and bridges.

For the lesser mortals of Hampshire, Domesday records about 9,000 servile tenants, 1600 serfs and some villeins were paying rent to farm and live on the manorial land.

Hampshire had 133 churches, several that were a part of a manor do not seem to have been included, so the exact number of churches in Hampshire would have been higher and 331 mills.

The details from Domesday give a gripping insight to life in Hampshire nearly a thousand years ago and the fact that we can go out into the county and still find remnants of Norman Hampshire history is incredible.