Did Charles Smith poacher deserve the sentence dealt him in 1822 or was his sentence unjustly harsh? 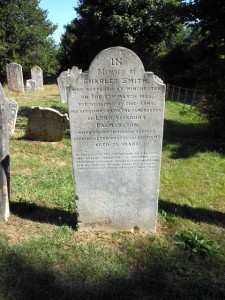 Charles Smith poacher lies in the graveyard of St John’s church Baddesley. It is an interesting place to observe and reflect upon politics and the game laws of England and the effect they had on the poor people who scratched a living under such laws.

Country gentlemen of the C18th were in control of the government of England. The landed classes with the help of wealthy merchants had encroached upon the power of the English monarchy and now, from the House of Lords, ran the House of Commons. Through the Commons and the merchants they ruled the country, not least through the judiciary. As Justices of the Peace in the quarter and petty sessions courts, they ruled the common people.

They secured for themselves social and other privileges, including the almost exclusive rights to indulge in field sports. This was a fundamental factor that helped to define the nature of C18th rural England. The Game Laws protected sporting rights evolved through a long process from the Norman Forest Laws and fundamentally meant that poor people struggled to feed themselves and their family. The Acts of Enclosure added to the burden of poor people, reducing those areas they could lawfully take ‘Game’ to a trickle.

Earlier game laws had established a system of gamekeepers who had been given almost unlimited powers to prevent people from taking game. The sport of hunting game was as important to the aristocracy as property was and the gentry employed men they hoped were sober, industrious and honest to guard their precious game. More often than not the gamekeeper was a former poacher and very often despised by the local community for his harsh and brutal treatments of his fellow men. Spring trap guns and snares were frequently left in place to capture the unwitting thief.

Once caught, the poacher could expect swift and severe penalties, including possible transportation.

So what has this to do with the churchyard at St John the Baptist church North Baddesley? 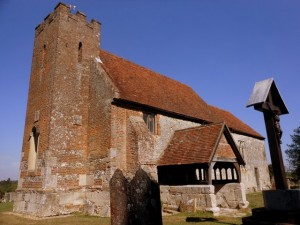 On 22nd  November 1820, Charles Smith, accompanied by his brother-in-law John Pointer, went poaching in Hough Coppice carrying arms. The land was part of the Broadlands Estate owned by Lord Palmerston. Smith was a known poacher and on being caught by Robert Snellgrove the gamekeeper’s assistant, Smith shot Snellgrove in the thigh and whilst injuring him, did not kill him. Smith then went on the run but was eventually caught and brought before the bench. He was tried at Winchester and condemned to death. He was hung at Winchester and unusually his body was brought back to North Baddesley by his friends and family that morning. According to the parish register he was buried in the churchyard on the 23rd March 1822, aged 29 years, not as the headstone suggests 30 years old. 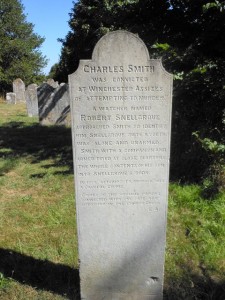 It is surprising to find one headstone for a poor executed poacher let alone two, so why are there two for Charles Smith?

Smith seems to have an amiable and well liked fellow in the area of Romsey and his sentence caused dissent amongst his neighbours and quite possibly would have attracted considerable public attention.

The first stone is supposed to have been erected by William Cobbett (1763-1835), whose writings, in particular ‘Rural Rides’ and politics, championed the poor. He observed rural life in Hampshire, attempting to see rural life from both the perspective of being both a farmer and a social reformer. He was keen to see social justice done. The second stone was erected by the Honorable Evelyn Ashley, grandson of Lord Palmeston in 1907, to give perhaps a balanced view of the whole affair because it seems the whole story was not told.

The Papers in the Parish Chest

The second headstone refers to papers, now held at Broadlands which reveal petitions made on Smith’s behalf to Lord Palmerston. Palmerston himself felt moved enough to plea for clemency in a letter to the presiding judge, Justice Burrough. Justice Burrough refused to be moved, seeing the crime as a wanton and cruel act of attempted murder and the sentence remained.

It is an interesting episode for the study of both the social and political attitudes of the day. There is so much more to be remarked upon through the presence of these two headstones to Charles Smith the poacher.