Portsmouth Harbour 1782 and the Royal Navy were in action in the English Channel just off the island of Ushant at the south western end of the Channel.

Portsmouth Harbour 20th April 1782 and HMS Foudroyant, a name that means thunder and lightening in French, was ordered along with others in the fleet of Vice Admiral Samuel Barrington, to pursue the French fleet. The Captain was John Jervis, a man who was a  was an admiral in the Royal Navy and Member of Parliament. He was recognized as an outstanding individual, a creator of efficient and professional fleets and who, going forward would be patron to Nelson. The French fleet was a convoy of 10 transports and escorted by two gun ships, the Protecteur and the Pegase along with a couple of frigates. 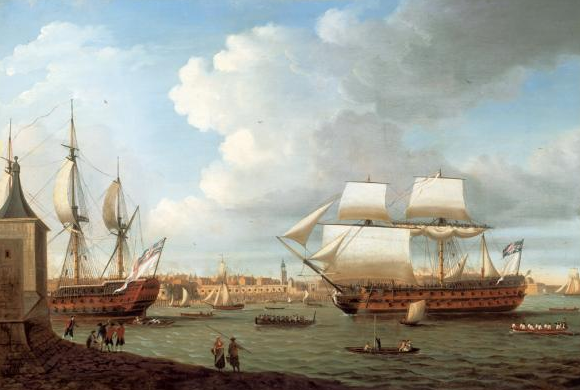 The evening sun began to set and HMS Foudroyant bore down on the French ship Pegase. Despite squally difficult conditions, the English ship put in close to its French adversary and in little short of an hour, boarded her and forced the captain Chevalier de Sillaus, to surrender. The English crew fought a hard battle and killed 100 of the 700 crew, losing only a couple of men themselves.

The ship Pegase was taken possession of and brought into Portsmouth Harbour. She became a Royal Naval ship and used as a prison ship from 1799 – 1815. John Jervis was knighted for his leadership during the battle.

The scene was captured by the artist Dominic Serres, who is himself an interesting character. For starters he was French born but traveled to Spain where he became a ship’s captain. Ironically he was taken prisoner by the Royal Navy in the late 1740’s and it was in England that he learnt to paint. Such was his skill that he became a founding member of the Royal Academy. He painted with a naval or marine theme no doubt drawing on his earlier occupation. In 1780 he was appointed Marine Painter to King George III, an amazing climb from being a prisoner of his Majesty’s Royal Navy.

The painting, an oil on canvas shows the buildings on the harbour entrance quite clearly.