William Cowper, eminent surgeon and anatomist and a Hampshire man 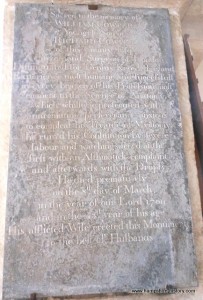 The memorial headstone to possibly one of England’s most important surgeon / anatomists can be found in the small church of St Nicholas  Bishops Sutton.

The memorial was erected by his wife and gives a fulsome description of a man who deserves to be remembered as being one of our greatest scientists.

William Cowper was born in Petersfield in 1666, the youngest son of Richard Cowper.

At the age of sixteen Cowper was apprenticed to William Bignall, an English surgeon who resided in London. At a later date he continued his apprenticeship under another surgeon, John Fletcher.
In March, 1691, Cowper became free of the Company of Barber Surgeons of London. He became a renowned surgeon and anatomist, practicing in London. He was one of the first two surgeons ever elected membership in the Royal Society in 1696 and produced several publications about his anatomical research and discoveries. He established his authority with the publication of his 1694 Myotomia Reformata, describing the human body’s muscular system. This, you will see, was included in the description on his memorial stone. 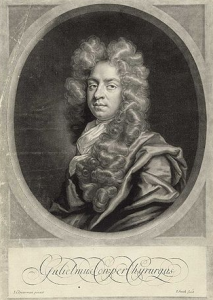 The book is fantastically illustrated with anatomical drawings and writing and is a work of art in itself but here lies a controversy. The plates were originally drawn by Gerard de Lairesse (1640–1711) for inclusion in a book ‘Anatomia Humani Corporis’ by Govard Bidloo 1649 – 1713. Cowper bought the plates and wrote his work next to them. Cowpers work was far superior and enlightened than that produced by Bidloo. New plates were also added to the book but never the less the controversy remained.

His death at the age of just forty five, was premature. In the eighteen years that he practiced William Cowper achieved much: 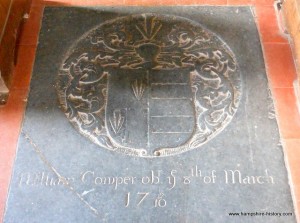 Obviously at some point he must have come to live in Bishops Sutton because here he is buried, the memorial stone in the wall of the nave of the church of St Nicholas and the tablet stone set in the floor of this humble church. Intriguing history indeed.

Sacred to the memory of William Cowper, youngest son of Richard Cowper of this county

A citizen and surgeon of London distinguished for genius, knowledge and experience

Most humane and successful in every branch of his profession

Most eminent in the science of anatomy which whilst he prosecuted with unremitting perseverance anxious to complete his trealtise of Myotomy,

He ruined his constitution by fever, labour and watchings

His afflicted wife erected this monument to the best of husbands

A number of the wonderful images from Cowper’s anatomy books can be viewed from the Wellcome Images archive, use the search facility to discover more.