It is however the only one still working and that you can visit. The Domesday book tells us that Whitchurch, a historic wool town, had three mills and it is easy to understand why. The beautifully clear waters of the fast flowing River Test provided all the hydro power and cleansing power necessary to a Medieval woollen industry. The guide book to the mill however believes that the Whitchurch Silk Mill was not one of these early mills but that the land on which the mill now stands was waste land, belonging to the Dean and Chapter of Winchester. 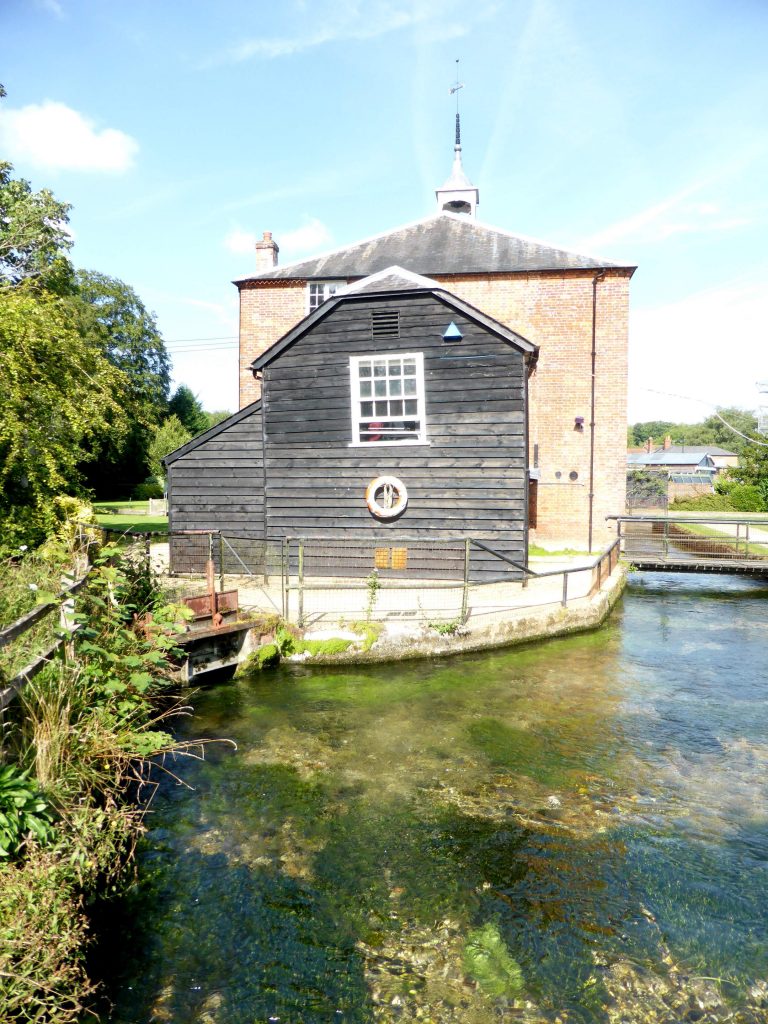 The trail of the copyhold of Whitchurch Silk Mill

The land was held by copyhold tenure and the details of the copyhold as it passed from person to person have been researched. It seems that those with an interest in the woollen industry owned the site, first George Penton, a local industrialist, then George Woodward Grove who gave it to his nephew, the great social reformer and philosopher Jeremy Bentham. His brother Samuel then became the tenant and the copyholder was Henry Hayter, he appears to have been something of a developer and it is thought that it was he, who whilst holding the copyhold from 1813 – 1816, built the mill and furnished it with machinery, maybe for manufacturing iron products. The mill was probably not built as a silk mill in the first instance. Hayter was an iron founder so it seems logical that he might have built it to fit this purpose. Hayter then sought to sell the mill but failed and the copyhold was granted to a silk manufacturer from the heart of the silk industry in London’s Spitalfields. That man was William Maddick. 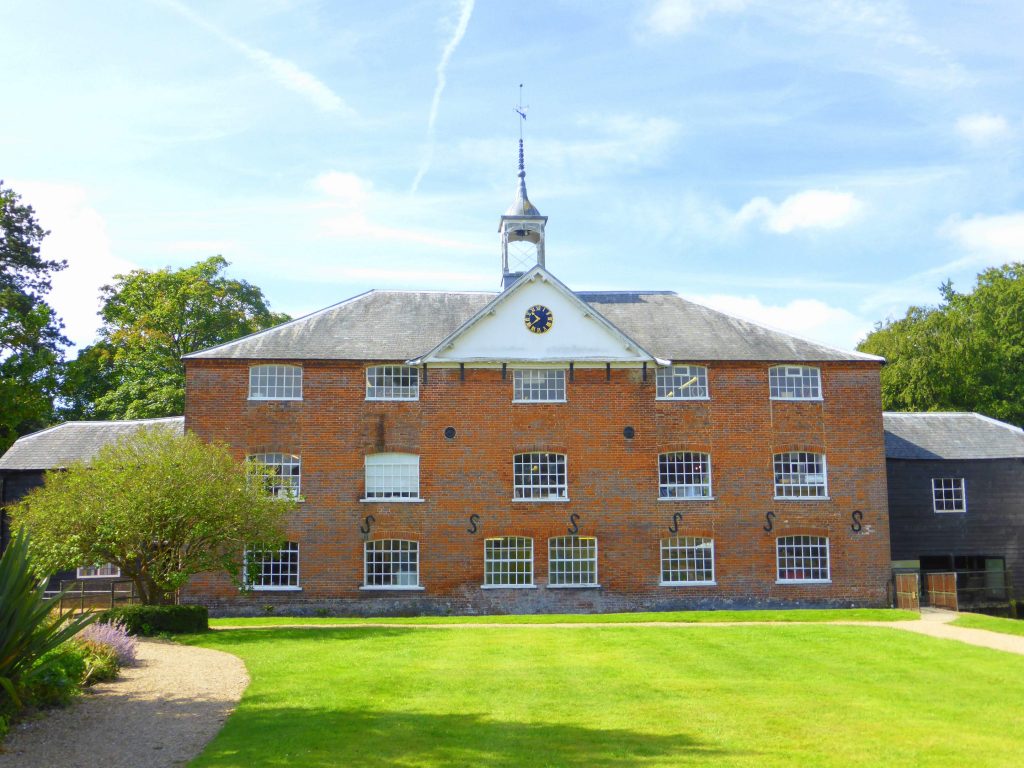 The Regency Mill with its cupola to house the bell calling workers to the mill.

It is interesting to consider how and why someone who was producing silk in the heart of London’s silk industry would want to come and occupy a mill in Hampshire.  The silk industry in Spitalfields was established in the 17th century when Protestants were fleeing from persecution on the continent. Many of them were silk workers, bringing with them new skills and of course that precious and exotic new material, silk. There was resistance to the foreign competition, historically the trade had had its fair share of conflict with weavers from Flanders but the stimulus to trade given by the new materials led to greater prosperity and money talked loudly and so Londoners took up silk weaving and absorbed the foreign workers and their skills. Home produced silk began to supply a growing market and technology and expertise in terms of dying and weaving fabric grew and grew. All sorts brought their skills to Spitalfields including the remarkable Anna Maria Garthwaite, who came to London and became one of the most talented silk designers ever. The Industrial Revolution radically changed the textile industry with inventions such as the ‘flying shuttle’ altering forever the way textiles would be manufactured. 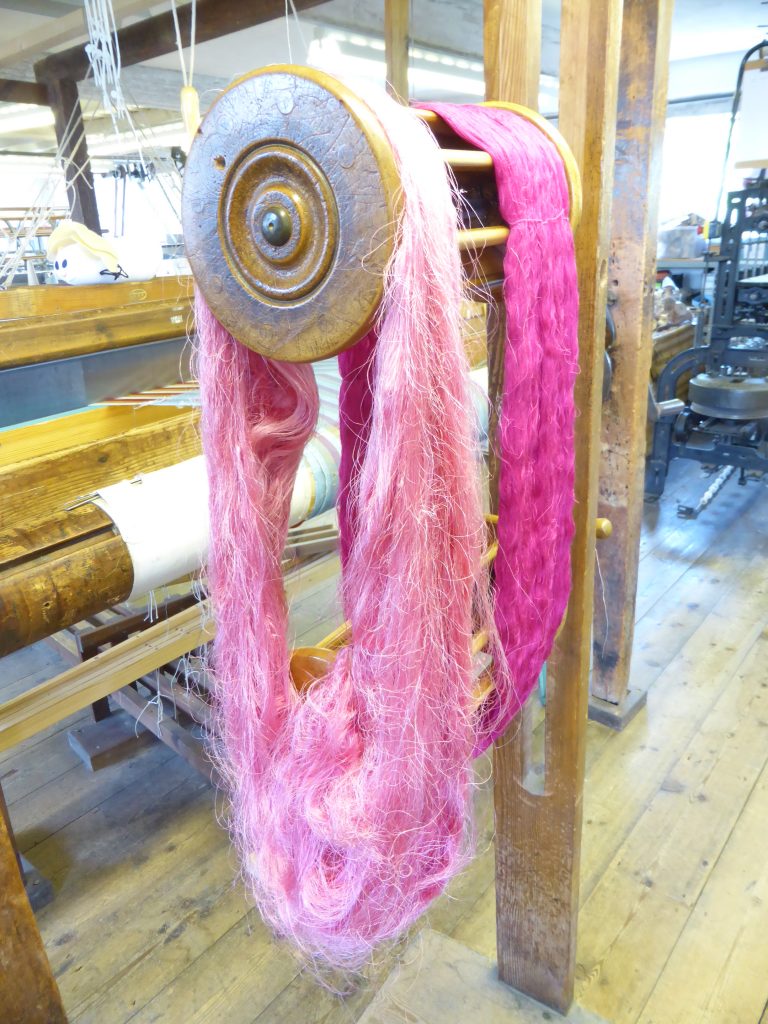 The silk industry began to change

In 1766 a total prohibition on the import of foreign woven silks became law and a series of acts were passed which gave stability to workers, rates of pay for particular classes of work were agreed, lists of prices were published to guarantee the agreed rates of pay. These acts were important to help stabilize the industry which was susceptible to whimsical changes in fashion. The demand was for finer, lighter silks with smaller more intricate patterns. This was more expensive to produce and new technology was needed to produce such a cloth. Maybe this is part of the reason why William Maddick took over the Whitchurch mill. At this time he was a weaver of black silk, the silk worn for mourning and of course for the lawyers at the Inns of Court. In 1824 the Act prohibiting the import of foreign silks was repealed under Free Trade Reform. The floodgates opened and French silk, both cheaper and finer caused many silk manufacturers to collapse into bankruptcy. William Maddick continued to operate the mill until 1844 but was he producing silk at this time or other cloths is uncertain. 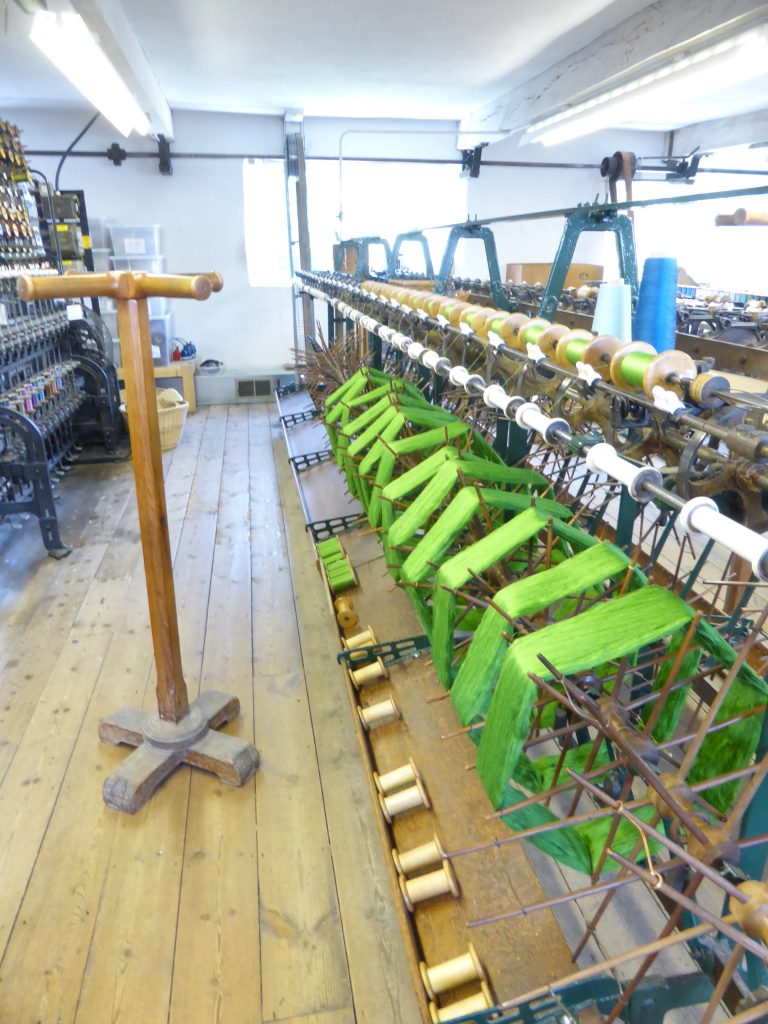 Wind the bobbin up!

The silk industry in Whitchurch

The silk industry comprised many parts. Import of the raw threads, creation of dyes, designs and the cloth itself and then the mercers and exporters of the finished article. In the local area there were other silk mills such as the one at Overton, a little further up the River Test, which operated in the 18th century. The guide tells us there was a silk broker living in Church Street, so maybe this area was better known as a silk producing area than the casual observer might imagine. It certainly attracted William Maddick to the area, maybe he already knew the people who lived here through their business in the silk industry. Whatever the detail there was already a knowledge of the skills necessary to operate a silk mill. 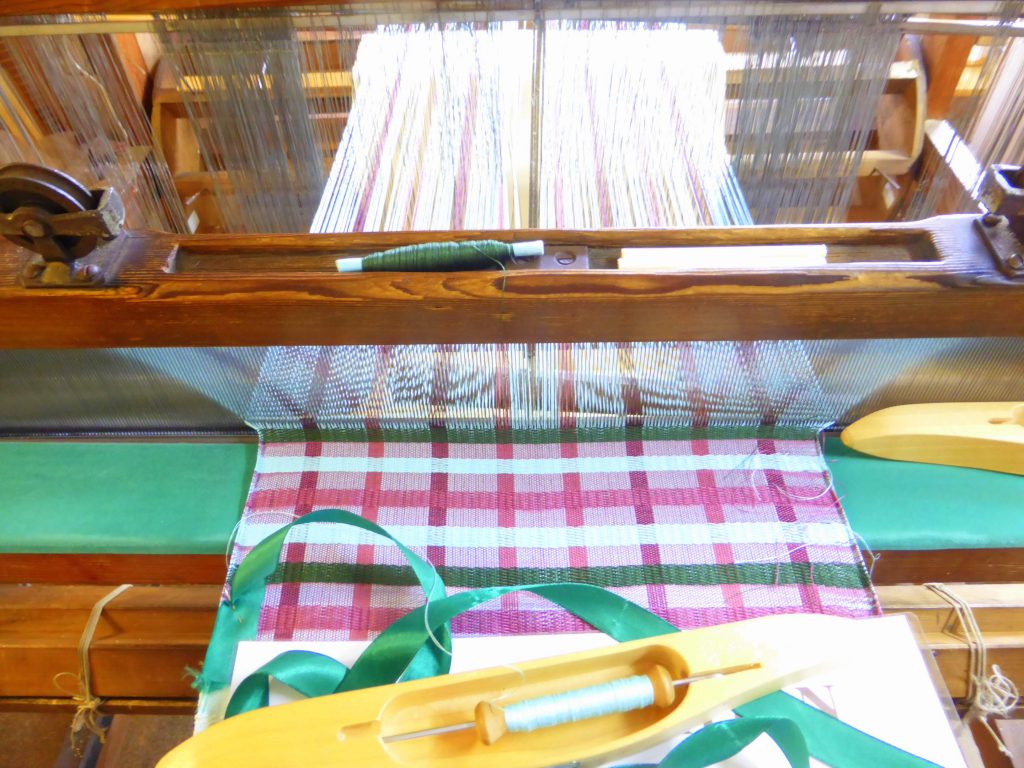 New people at the mill

From 1846 – 1871 the mill was run by William Chappell and his sons. They took over the mill in the period when British silk production was on the wane. Duty on French silk was lifted and this along with other factors meant manufacturing an English silk delivered scant return. Tough times for the Chappell family as they struggled to keep producing silk even after the death of William Chappell but economic forces proved too great for his widow and in 1886 the mill passed into the hands of John Hide. He struck a deal with the rain coat manufacturers, Burberry and was responsible for creating the linings of these still well known garments. Thomas Burberry made Basingstoke in Hampshire one of the centres for his clothing production and the link between Whitchurch Silk Mill and the Burberry brand when John Hide became Thomas Burberry’s brother in law.  After John Hide died in 1911, his son James continued weaving and growing the business. The water wheel which had powered the looms for so long did not provide enough energy to drive the larger looms and during this period a generator ensured the future with powered looms. 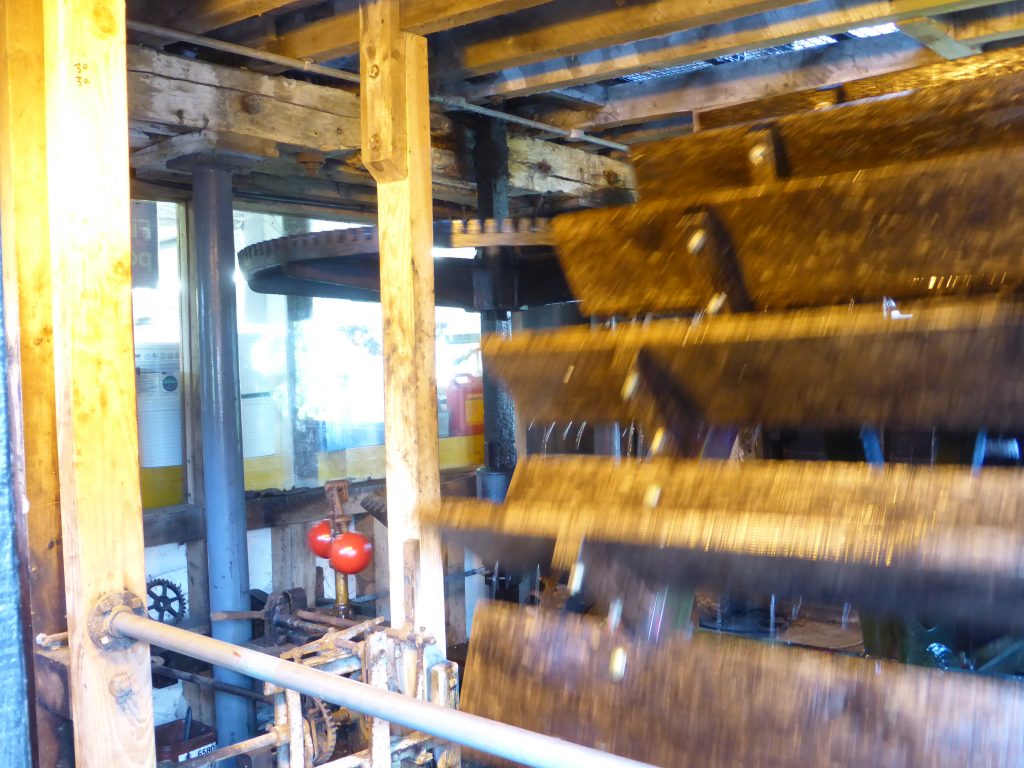 The undershot wheel powered by the River Test.

To the present day

It is a great credit to those that came after the death of James Hide, that they saw the potential for the mill. Stephen Walters and Company saw it through the decades post WW2, so much needed repair that in 1971 they sold it to Ede and Ravenscroft, legal and academic gown makers. By the mid 1980’s they to faced financial problems and at this point Hampshire Buildings Preservation Trust stepped in and saved it in its entirety, thus ensuring its future as a working mill.

Enjoy some time at the mill.

A visit to the mill is a wholly charming experience, the setting delightful, a wonderful piece of industrial history in the heart of Hampshire.

The River Test leaves the mill.