The tiny West Worldham church is easy to miss as it sits up on a bank, tucked in beside an old manor house.

The West Worldham church of St Nicholas was built in 1200 by Richard De Annecy as a chapel to Hamble Priory which was a cell of the Benedictine Abbey of Tiron in France. Both land and ties were granted to the Priory and a small contingent of friars would have been placed here to look after the chapel and manage the land.

The position of the chapel is interesting. It sits up on a bank in close proximity to the C16th farmhouse alongside. The friars would have been kept busy managing the day to day affairs and it is quite possible that they would have occupied some sort of manor house on the site of the present one. They would also have needed a place in which to carry out their devotional responsibilities and so built the single cell chapel alongside.

The church has evidence of three altars, there are three piscinas, suggesting the church was divided into separate areas of worship for the friars and the community. This also explains the two doors, one leading towards the building which would have been occupied by the friars and the south door for other worshipers.

In 1114, alien priories were dissolved and William of Wykeham purchased West Worldham Church and its income for endowment of his new college at Winchester.

Things to look for 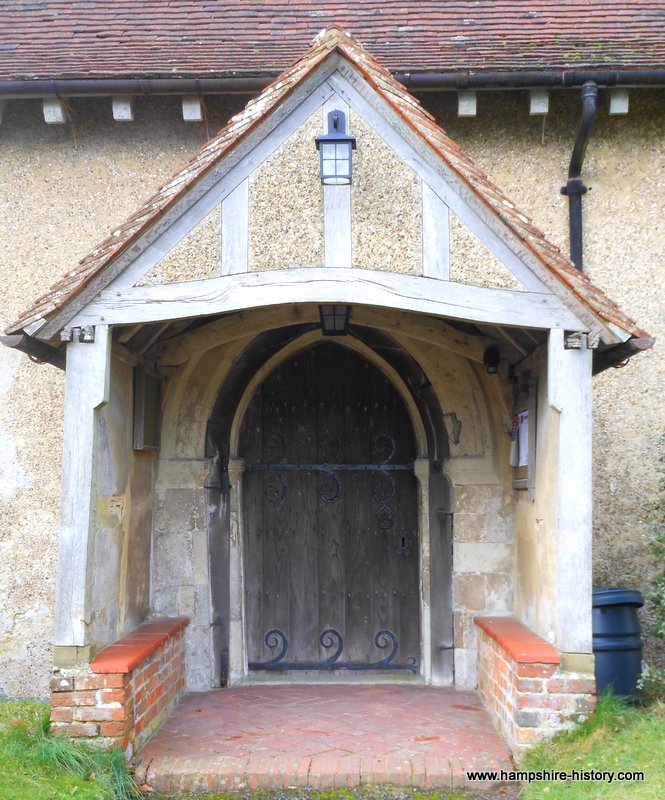 The window with its unusual collection of diamond panes of glass and pictures of a parrot, a dove, a robin, a lamb and a mermaid, the latter being part of the coat of arms of Nicholas Mason.

The south doorway is the original C13th doorway.

It is worth visiting the church at East Worldham, perched on a hill with marvelous views over the surrounding countryside and containing a wonderful Hampshire church treasure in the form of a female effigy, lying in peaceful repose