Did Vincent Van Gogh ever come in person and see the works of art in Owslebury that so inspired him? Now that’s an intriguing thought…. 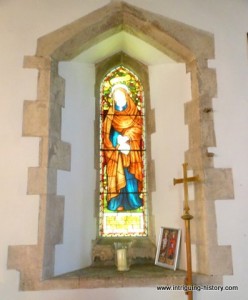 The beautiful village of Owslebury in Hampshire seems at first glance to be much like any other English village with its ancient C12th church, thatched cottages and black beamed village pub but Owslebury located on a ridge of chalk upland just a few miles from Winchester has a number of intriguing historic storylines that are easy to overlook.

One of these episodes in its history had gone unnoticed for over a hundred years.

In the very pretty church of St Andrew, stained glass windows reflect their light, just as in hundreds of churches up and down the land. Approach the altar however and look from side to side to see the beautiful face of the Virgin Mary looking down at you. the warm mellow colours are different to those of other windows in the church and the faces of the Mary’s distinct from one another.

In 1876, the painter, Vincent Van Gogh, saw the design for these two windows at the studio of stained glass makers Cottier and Company in London and was so inspired by their beauty, felt compelled to write to his brother Theo;

Van Gogh was just 23 years old at the time and still seeking his artistic niche, seeking inspiration from all he observed, the beauty of these designs certainly formed part of his artistic journey. 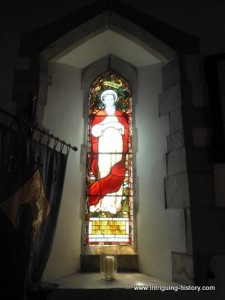 The windows were commissioned by William Carnegie, 8th Earl of Northesk, as a memorial to his wife Georgina and daughter Margaret, who both died before him. He chose to depict these beloved woman as the Virgin Mary and Van Gogh was obviously deeply moved by the beauty and religious significance of the art work seen.

See the detail of the two faces, the older woman Georgina and the younger Margaret, mother and daughter captured in stained glass and so admired by Vincent Van Gogh.