The Tomb of Dame Margery Caryll

The tomb of Dame Margery Caryll.

The old Norman church of St John in the village of Greatham was built in 1282. All that remains is the Chancel, the rest is a ruin. However inside is housed the Grade II listed tomb of the C17th manor holder of Greatham: Dame Margery Caryll (nee Freeland) (1594 – 1632). 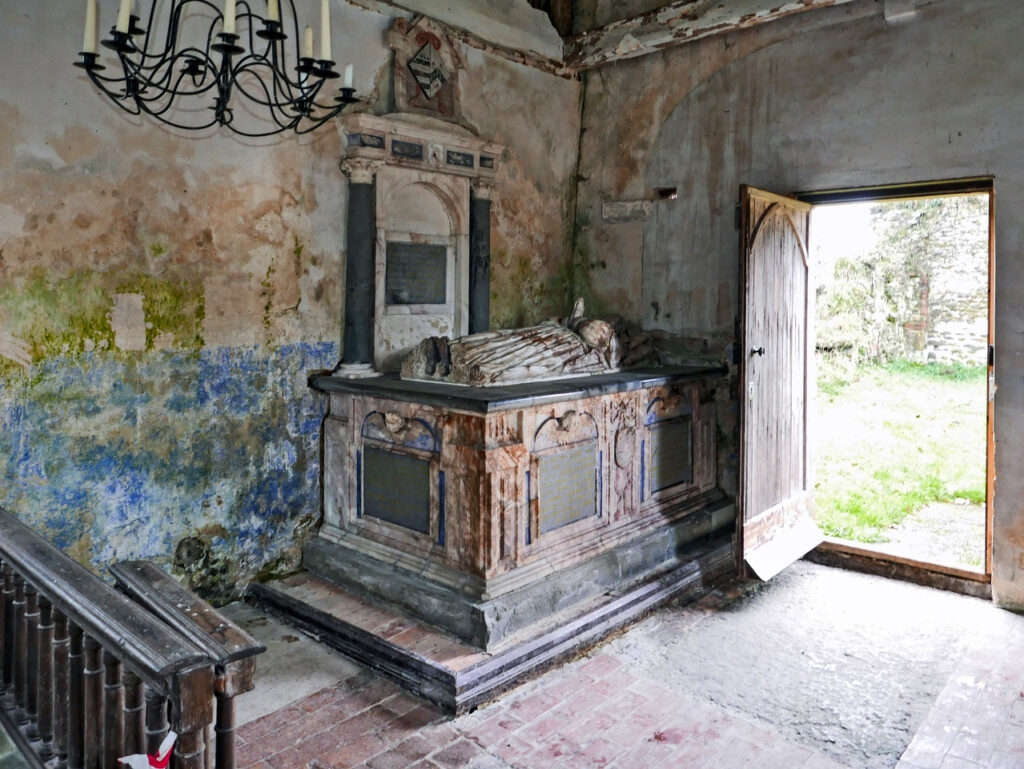 Who was Margery Caryll?

Margery born in 1594, was the eldest daughter John Freeland or Freelonde (1569 – 1596) of the Manor of Greatham and Elizabeth Uvedale of Colemore. She was baptised in St John’s church on the 27th June 1594. The Manor of Greatham  had been purchased by John’s uncle, Nicholas Freeland in 1578.

On 14th April 1610, Dame Margery married Sir Richard Caryll. She was just seventeen, he was thirty nine and a wealthy landholder from a Sussex family of parliamentarians. They owned the Manor of West Harting in Sussex, just east of Petersfield. They also owned land at Warnham and Shipley.  Sir Edward Caryll, the father of Sir Richard purchased the manor of West Harting in 1590. His ancestor, Sir John Caryll (1474 – 1573) was Serjeant at Law, Attorney General to King Henry VII. 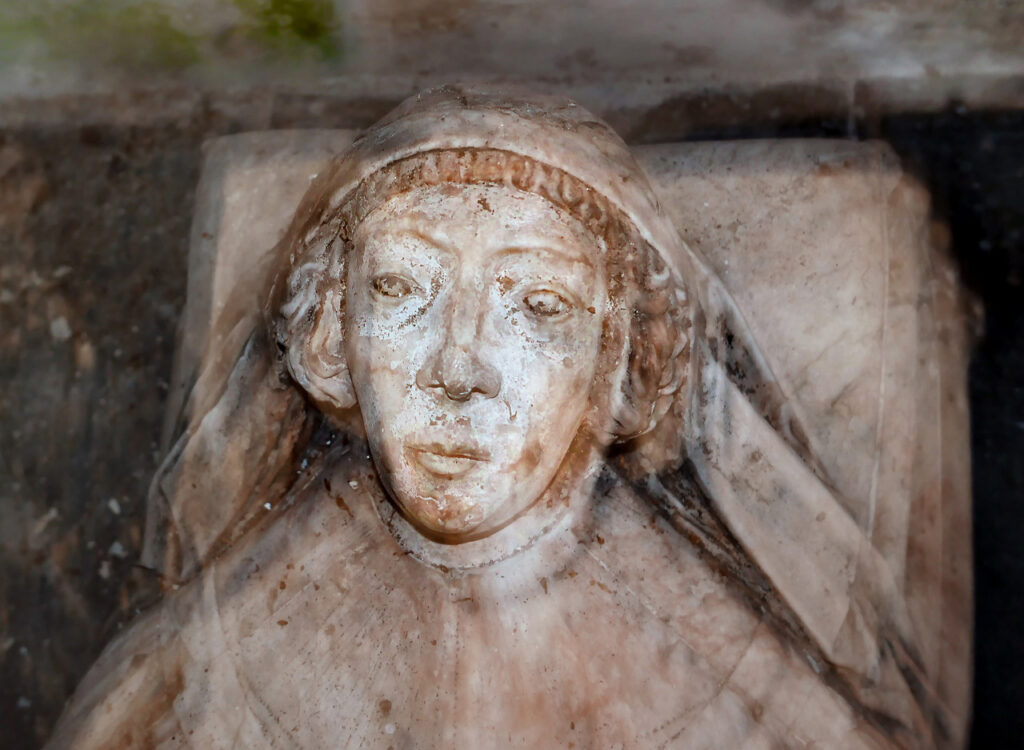 The marriage between Margery and Sir Richard was sadly short lived. Her husband died five years after the marriage, leaving her a widow and so she remained until her death aged 37.  A popular myth is that Dame Margery died of blood poisoning after pricking her finger, aligning her story with the fairy tale of Sleeping Beauty. However other evidence in the British Library archives suggest that she died of Smallpox. Her will can be found at the National Archives. 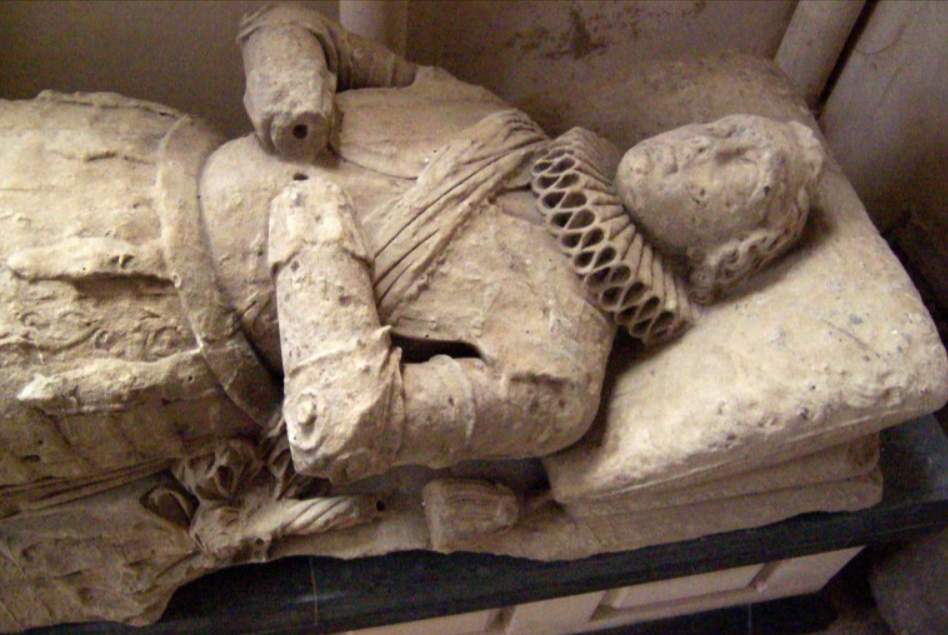 When Dame Margery died she passed the manor on to her kinsman; Richard Love (1586 – 1628), a first cousin through her aunt Elizabeth Freeland, who had married into the Love family from nearby Basing Park at Froxfield. The son of this cousin John, was Johannes Love (1620 – 1679), who later erected her tomb, and who is recorded to have been Rector of St. John’s Greatham from 1661 until his death in 1679.

The tomb in the old church.

The tomb of Margery Caryll is made from a type of rose coloured Alabaster that was derived from the Fauld quarry in Staffordshire, and it is believed to have been carved in London owing to its particular style. The way the folds and pleats of her dress have been carved around her shoes is particularly lovely. Her face seems so young. 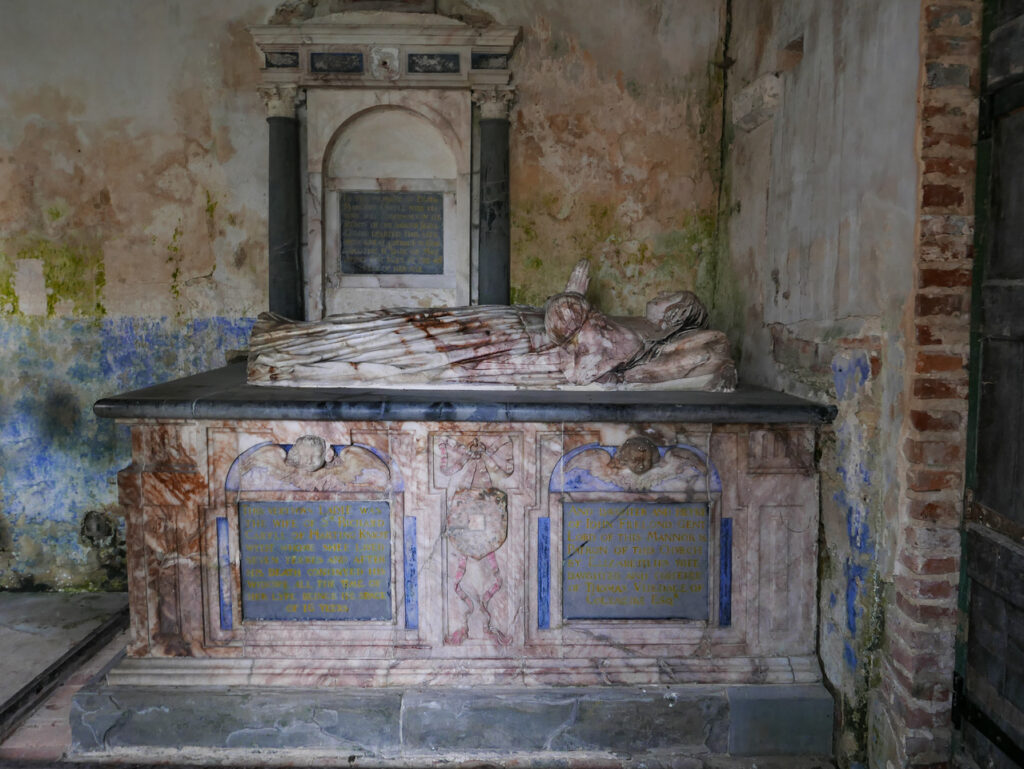 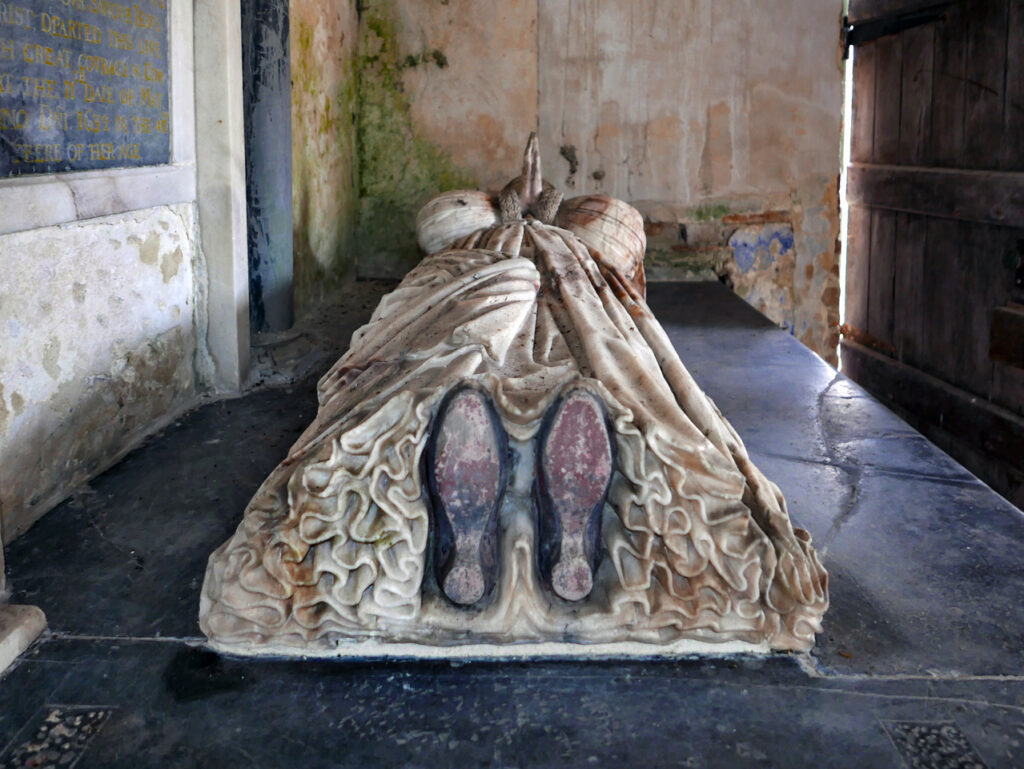 Some background to Greatham.

Greatham is a village in the civil parish of Greatham in East Hampshire.  It is in the South Downs National Park area, bordering the parishes of Selbourne in the north,  Liss in the South, Whitehill in the east and Hawkley in the west.  The name of Greatham is recorded in the Domesday book as ‘Greteham’. It is said to be derived from the Scandinavian word of griot of gryt meaning gritty soil or stoney ground, combined with the Anglo-Saxon ‘Ham’ meaning; village, estate, manor or homestead upon stoney ground.  This part of Hampshire is known for its thin sandy soil.  More can be read about this in the interesting book: The History of Greatham by Peter Gripton.

The Manor of Greatham is recorded at the time of the Domesday book to have belonged to Queen Edith the wife of Edward the Confessor; the Anglo-Saxon King who died in 1066.  It was believed to be part of an extensive estate that included the hunting ground of Woolmer Forest.  The manor remained in Royal possession until sometime in the C12th when it began to change hands. 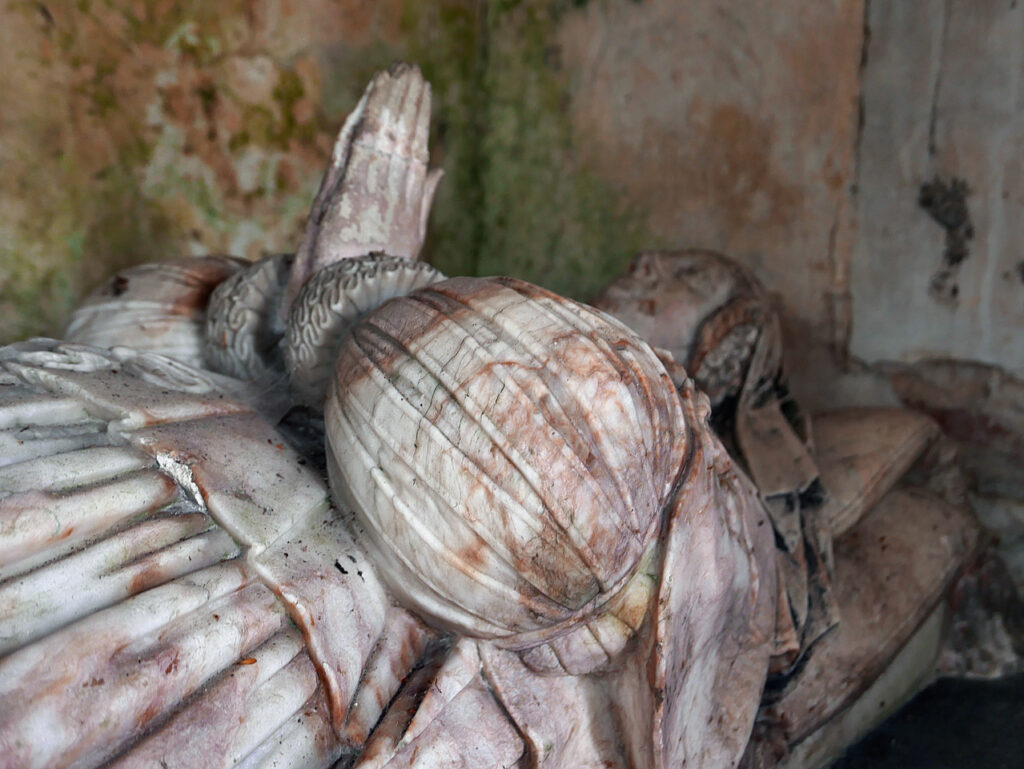 The new church of St. John at Greatham was built in 1875 and is situated on the opposite side of the road to old St John’s. The old church served that parish for 600 years.  This larger building was required at that time for the increase in local population.  When the new church was built, some people were keen to continue worshipping in the old church. However the vicar wished to encourage his flock to follow him, thus parts of the old church were used in the building of the new one.  Roof tiles, timbers and bells were removed and thus the old church fell into disrepair.  Only the Chancel would be spared this dereliction, its roof being left intact so that the beautiful alabaster tomb inside would remain protected.  It has recently been restored and can be accessed by request. 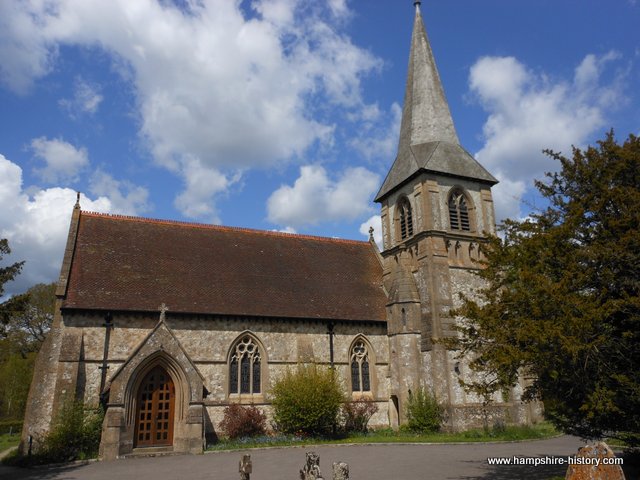 Hampshire History would like to thank Isabelle Hutchison for researching, writing and taking the photos for this post.