Isington Mill in the Parish of Binsted

Isington Mill and Oast House on the River Wey.

Isington Water Mill is one of 16 mills that sit on the north branch of the River Wey, which begins at a spring in nearby Alton. The chalk stream flows through the parish of Froyle and Binsted until it connects with its southern branch at Tilford.  At this point on the river there were once two mills within half a mile of each. One, a fulling mill known as Millcourt, was on the Froyle side of the parish boundary, it no longer exists. The other was Isington Mill. The River Wey as a whole is known for having more water mills per mile along it than anywhere else in Britain. 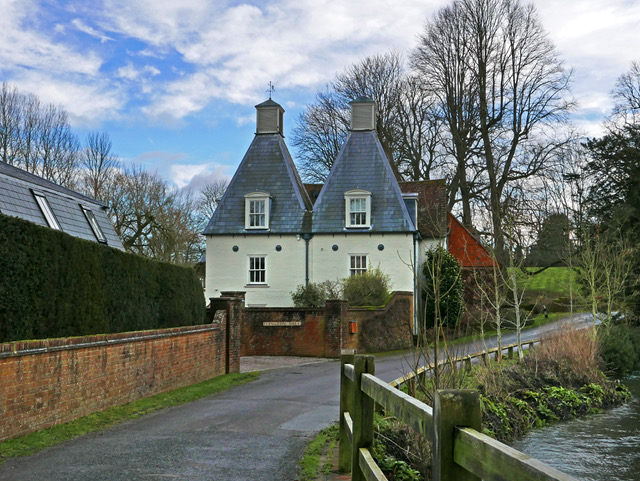 The Oast Houses of Isington Mill. Thanks to www.izzyhutchison for the image.

Hop growing and the mill.

In the C18th century, yeoman farmers in the area prospered, raising livestock in the water meadows and growing corn, wheat and hops, alongside. This part of Hampshire was an important hop growing area and nearby Alton was a brewing town.

The hop growing practice in this area of Hampshire was quite distinct from hop growing in Kent. Hampshire growers used a different type of hop and method of harvest. However hop growing in Hampshire fell into decline in the 1920’s owing to the disease, Downy Mildew. Hop growing began to be phased out and replaced. The oast houses were no longer useful and along with the water mills, many were converted for residential use.

The Mill house at Isington with its adjoining oast houses was built in the early to mid C19th. It was probably used for grinding corn, storing it, and then converting it to malt ready for the brewing process.  The oasts alongside would have been used for drying the hops that were grown in hop gardens. These hop gardens were created on the rising ground above the riverside meadows of the River Wey. 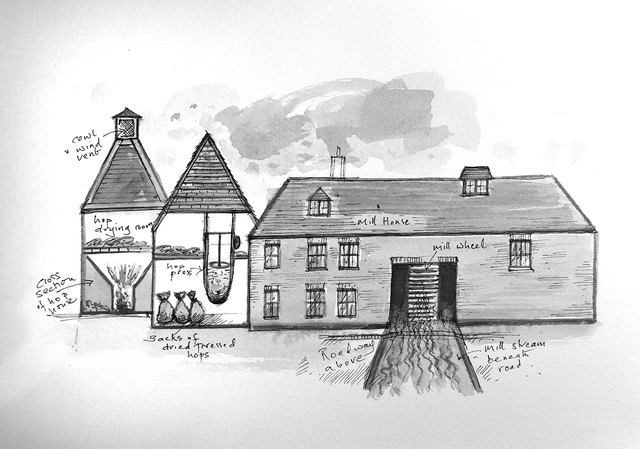 Section drawing to show how the oast houses may have functioned. Thanks to
©Isabel Hutchison for the drawing.

After the second World War ended in 1945, Isington Mill was a dilapidated shell. However it would soon find a new purpose as the luxury home of one of Britain’s greatest WW2 leaders; Bernard Law, Viscount Montgomery of Alamein. Monty, as he was known, restored and converted both the mill house and its two oasts into comfortable living accommodation. He also created a garden and lawns from the meadow around it.  The Field-Marshall lived at Isington Mill for the next thirty years, from 1947 – 1976 until his death at the age of 88.  After a state funeral his body was buried in a simple grave in the nearby churchyard of the Holy Cross Church at Binsted.  The spot where he lays is alongside the public footpath, where it meets the views of the beautiful open countryside. 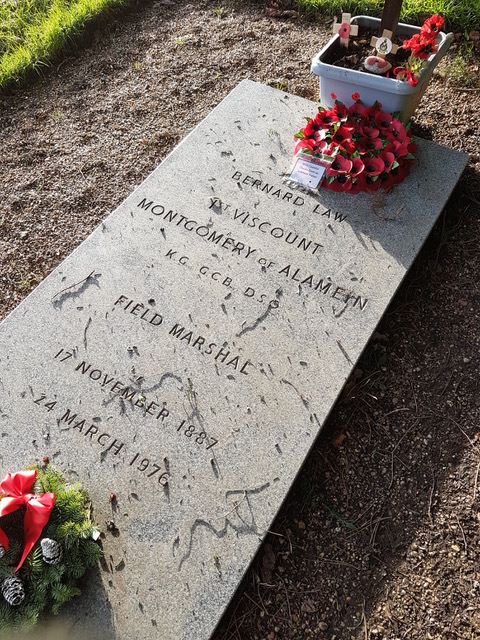 According to his step-grandson, Bernard Montgomery had no home to go to after the war and applied to Whitehall for accommodation. He had expected, as a reward for his services rendered, accommodation along the lines of Blenheim Palace! It was not an unreasonable assumption. His efforts in winning the Battle of El Alamein, amongst others, had well surpassed those of the Duke of Marlborough in the earlier century. Monty had a wife, and a child from his first marriage, both also in need of a home. However there was no money left in the treasury purse for palaces on the scale of Blenheim, so in this respect he would be defeated.

The country was in need of rebuilding and Monty settled to restoring a dilapidated mill house in Hampshire in an idyllic spot.  As an Englishman’s castle is his home, the reward for Monty would not have been disappointing. 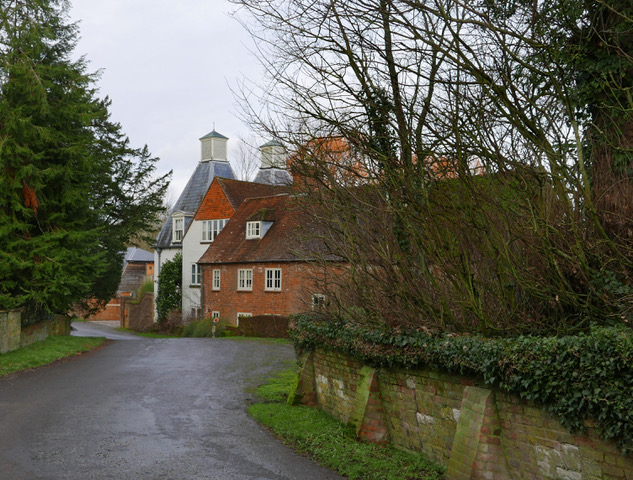 The restored mill and oast houses. Thanks to www.izzyhutchison for the image.

Viscount Montgomery in WWI and WWII.

Bernard Montgomery was not a native of Hampshire, he was a man of Irish heritage born in Kennington, London. His father had been a minister in the church there.  His grandfather Sir Robert Montgomery was an Ulster man, who had been a colonial administrator in India.

The family moved about, returning to Ulster to the family seat for part of his childhood. He was then sent to Tasmania where his father was the Bishop.  Returning to London in his teens Monty eventually enlisted at Sandhurst College. He graduated in 1908 and was commissioned into the the Royal Warwickshire Regiment as a Second Lieutenant.  In 1910 he became Lieutenant and by 1912 adjutant of the first battalion of his regiment.

Two years later the first world war began.  Montgomery exceled as an army officer, demonstrating gallantry and leadership skills. He suffered a terrible injury and was severely wounded having been shot through the lung.  A grave had been prepared in case he died.  After recovering in 1915 he became a Brigade-Major, serving in the Battle of the Somme in 1916 and  finishing the war as Chief of Staff. However after the war in 1919 he was forced to take a step backwards and had a job persuading the Commander in Chief to put him on the list for Staff College at Camberley.  Success was not easily come by in those days but he achieved his goal and graduated in 1921.

These initial hurdles had prepared the young officer for what was to come. Monty would now go forward with a ruthlessness and determination tempered with a better understanding of politics. He knew now that defeating the enemy was not always the only thing that needed to be considered.  The advent of WWII  gave Monty the opportunity to prove himself as an excellent leader. He had strategies that were only rivalled by his main opponent the Desert Fox; General Erwin Rommel (1891 – 1944).  He not only admired him, but kept a book on his opponent’s victories.  Monty would later name his pet spaniel Rommel when the war was over. 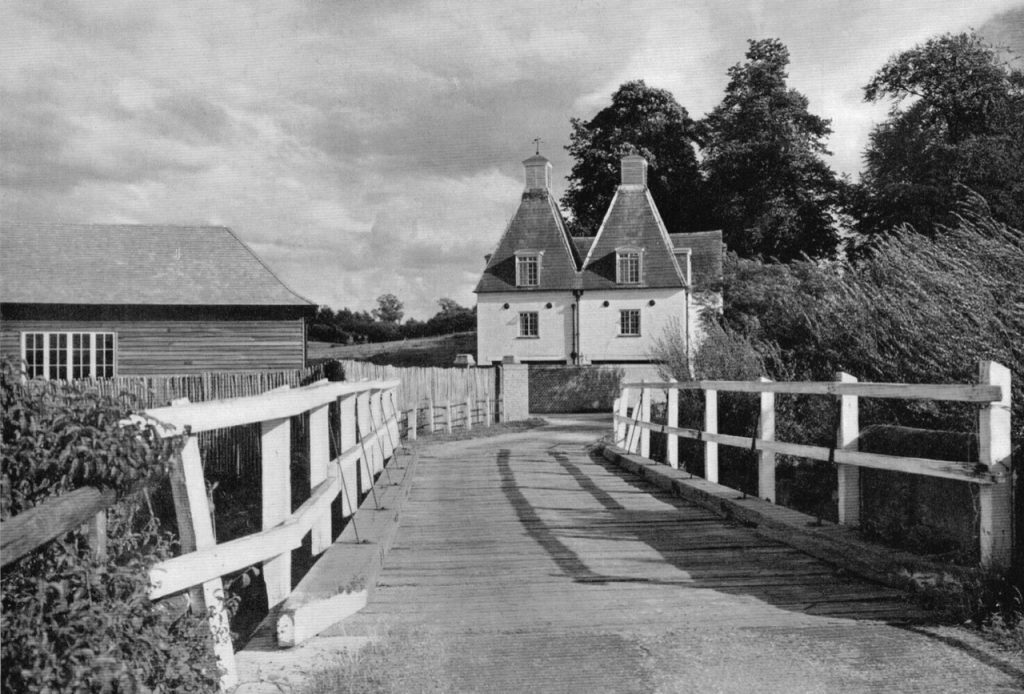 An image showing the old bridge.

At El Alamein, the General who should have taken command was killed on the journey out. Monty was sent in his place and proves to be an excellent commander of the forces there. It was crucial that the Germans did not capture Egypt or the Suez Canal. The canal was a vital means of transport for the British for supplying their troops.  Monty’s concern was always for his men; their morale and that they were fully equipped and properly supplied. The Germans had already been compromised in this respect. When, under Monty’s leadership, the second battle of El Alamein was won, the allies finally got their first major land victory in the war. They would now be in a good position to get their troops across to Sicily and from there begin the take back of Europe.

In 1946 Bernard Montgomery was created 1st Viscount Montgomery of Alamein.  General Eisenhower commented of him that;

“he loves the limelight, but in seeking it, it is possible that he does so only because of the effect upon his own soldiers, who are certainly devoted to him”.

He was not known for being tactful, preferring to be frank, and there were those that were more than offended.  He did not always follow orders, choosing at times to use his own judgement. However it was all these traits that helped the British win this critical battle without which the allies may not have won the war.  His mantra was always;

“decision in action and calmness in the crisis”

This post was researched and written by artist and photographer Isabel Hutchison and her work has been published with her kind permission. If you would like to see Izzy’s work then go to www.izzyhutchison.com or join her on Instagram.