Drive down Alresford’s magnificent Broad Street, broad enough to turn a coach or cart and horses and the site of market and fairs for over 800 years, bend your way around the Globe public house and the narrow road into Old Alresford appears. In a car one quickly passes along the tree lined section of carriageway but what many don’t realize is that they are travelling along the top of one of Englands largest medieval structures. 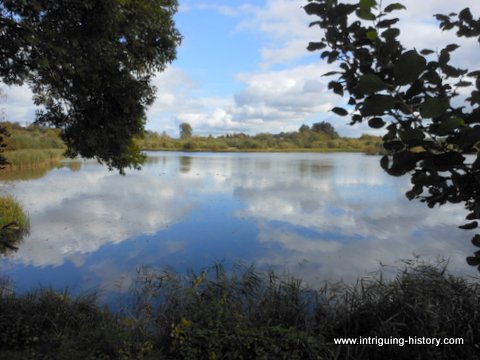 The road is carried along the top of a dam, built under the instructions of Bishop de Lucy, who was nominated to the see of Winchester in 1189 and who succeeded Henry de Blois as Bishop.

The purpose of this dam, which is 20 feet high and 400 feet long, was to create a huge resevoir, originally about 200 acres in extent although now, due to silting, it covers an area of only 30 acres

Why was the inland resevoir so large?

It is thought that it was built to make the River Itchen, into which the River Arle flows, navigable for most of the year. The purpose of this was to create a great waterway between Winchester and Southampton. The importance of waterways to life in early medieval England and particularly to commercial life, cannot be understated. Roads, where they existed, were incapable of carrying carts laden with stone and timber, essential ingredients to an expanding economy but why was this inland reservoir so large?

The Bishops were certainly bringing boats up into this inland harbour and thence transferring to their palace at Bishop’s Sutton but was it possibly a very active commercial harbour?  Long stretches of the Itchen itself were deepened to allow vessels to travel inland. Was the huge undertaking of building this dam and creating the resevoir, undertaken to further this trade beyond what has been previously thought?

Is there a connection with King John?

The creation of the reservoir certainly drained land to the west and north, making routes into Alresford easier from those directions and the dam provided a crossing point between New and Old Alresford but it seems an enormous feat of engineering just to achieve these objectives, unless the commercial gain was considerable.
It has been suggested that King John brought his navy to this safe inland harbour, away from raiders on the southern coast but the truth of this is not known.
Reed beds cling to the sides of the reservoir and would almost certainly have been used to thatch local houses and its waters used to pass through the watercress beds for which the area is renowned.

At the foot of Mill Hill lie the mills and old buildings that were the focus of the town’s tanneries and the embankment of the dam can be clearly seen rising upwards from the river.

The vision of Henry de Blois

The vision of Henry de Blois and then, after his death, that of Bishop de Lucy, was to create a market, a commercial centre, in Alresford, it was quite possibly a more grandiose scheme than we can now imagine from our far off perspective. The history in the infrastructure of Broad Street, the dam and the reservoir probably have a lot more to tell us than they reveal to us at present. An intriguing place no doubt.