September 3, 2012 / Amanda Moore / No Comments
This entry is part 3 of 15 in the series Anglo Saxon Hampshire

The church at Corhampton in the Meon Valley, sits above the present road, tucked away, so that you can pass by and hardly notice it is there but it is a jewel in the Anglo Saxon history of Hampshire. 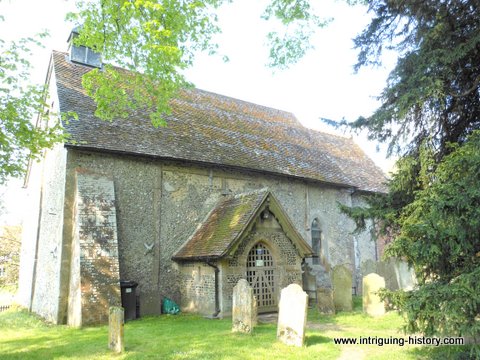 The River Meon runs beside the church, to a mill building that sits to the North. When the church was built, the river was much wider and navigable, allowing goods to be transported up the valley.

The original church was probably a wattle and daub building and one of several constructed at the time of St Wilfred’s missionary to convert the heathens of the Meon Valley to Christianity. The wooden building then replaced by the stone one seen today.

The church itself has undergone sensitive restoration internally but the dominant feeling in the structure, is of an Anglo Saxon treasure. Externally it takes little effort to see how it might have appeared in the time it was built in the reign of King Canute, c1020AD.

The church sits in a unique position in above the road

The ground rises up to form a pudding bowl mound, around which a large ditch has been channeled. The mound may have been formed for the purpose of building the church upon it, maybe the church was elevated above the marshy flood plain of the river. Other suggestions are that it was the site of a former pagan or Roman temple but little evidence exists to support this theory. Whatever the reason for the mound, it lifts the church to a unique position in the landscape. Stand back and look at the church, stripping away the Medieval and Victorian additions to see the small Saxon building.

The exterior of the church, offers example after example of its Saxon origins. The churchyard at the northern end is circular, a characteristic of Saxon graveyards but it is the building itself that confronts the observer with the most striking examples of Saxon architecture to be found in the south of England.

The church sits on its original stone plinth, which is visible particularly around the north west corner of the church and is very rare. The palister strips and the long and short quoins of stone are very distinctive. The stone for this church was brought to the site from the Isle of Wight, probably rafted up the River Meon. The north side of the church is at it would have been in Saxon times, (ignoring the medieval windows and Victorian vestry). The blocked in doorway is of special interest. Clues as to when it was blocked up, lie in the C12th window that has been inserted in the archway. The arch itself is a simple deign but the uprights are carved in horizontal rolls and the bases appear very similar to the base of a gold altar cross presented by Canute to the New Minster Winchester in AD 1020, hence the possible date of the church. 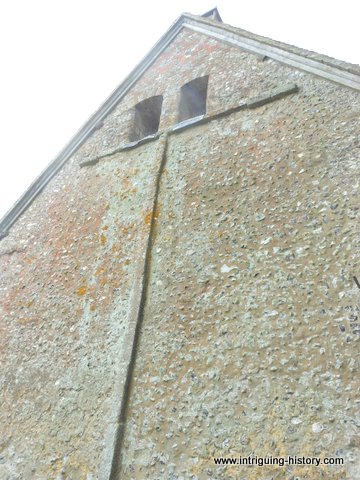 The Saxon sundial, tucked away around the corner to the right of the porch is easily missed but its significance is immense and serves as a reminder that this building was in daily use, a thousand years ago the Jutish Meonwara’s, who lived along the river, would have stood in the same place observing the passing of their day.

Inside the church, further evidence of the Saxon origins of the church abound. A complete Saxon chancel arch with its accompanying palister strips.

Moving into the chancel and beyond the altar rails lies the original Saxon altar, with its five consecration crosses, as is usual on Saxon altars but with an additional cross on the long side.

The thin walls bearing the weight of the roof are typically saxon. Constructed from whole flints, gathered from the surrounding fields and mortared together and then plastered over.

And just when you thought it couldn’t get any better, wonderful wall paintings depicting amongst other things, St Swithun and the miracle of the eggs on the bridge.

It is hard not to be moved by this small building, part of a community and witness to the conversion of the pagan Meonwara tribe to Christianity more than a thousand years ago.