Hampshire is not the first place that springs to mind when considering C19th socialism but Robert Owen, pioneer socialist brought his ideals to the county in the form of Harmony Hall 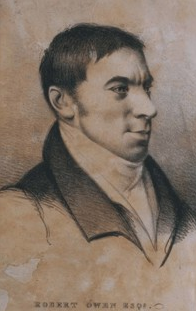 Robert Owen was born in1771, a hardworking young man employed in the drapery business in the north west of England. He was quick to take the opportunity of investing in the newly expanding textile industries. He began by manufacturing spinning mules and then set himself up as a cotton spinner. His reputation grew and he was appointed manager of Peter Drinkwater’s new spinning factory, the Piccadilly Mill. He then commenced on a journey, forming alliances with other textile industrialists which culminated in the purchase of David Dale’s Lanark Mills. Dale had a vision of an industrial community where children, notoriously poorly treated in mills elsewhere, would have the chance of a fair working life. It was on these conditions that Robert Owen was allowed to purchase the mills and incidentally marry Dale’s daughter.

Dale had been a philanthropist and Robert Owen took on the mantle. Housing, education, health and welfare, were his main priorities. He considered environment and education to be the main influence on a person’s character. He also understood that by introducing an infant school mothers who were skilled workers could return more quickly to work. He was years ahead of his time and made wealthy by his own means as well.

Radical views that alienate others

He managed to alienate himself from many people suspicious of his radical views and his denunciation of religion, damaged him and the work associated with him. He had a vision of communities whose lives would be regulated and whose Utopian ideals shared and adhered to. Great Britain was lukewarm to his ideas but Robert Owen set out for America to visit the Rappite community at Harmony Indiana, which was for sale. He bought it for £30,000 and in April 1825, initiated a new community he called, New Harmony. Within two years it had failed, divided by increasingly controlling egos.

Things at home in Britain were changing, democratic socialist ideas were advancing and through his writing, Robert Owen had a following particularly among the labour aristocrats of London. Robert Owen in 1834 felt inspired to return to his plan for a community and founded a journal, The New Moral World, that would prepare public opinion for the new millennium.

So Robert Owen came to Hampshire

Hampshire in the 1840’s had its own problems of rural unemployment, pauperism and crippling mal- nourishment. The Swing riots in the 1830’s and the imposition of the workhouse system had created an unsettled and disturbed population.

In the 1840s, Robert Owen embarked on a new settlement at Queenwood Farm in Hampshire.  This land was originally part of the manor of East Tytherley, called Columbers in the 15th century. He rented out the 1000 acres and built a luxurious mansion, Harmony Hall, as his centre for Social settlement. There was insufficient capital and the community, intended to support 500 members, barely reached a hundred souls. It was an abject failure, running out of funds and discipline. His followers Owenites were bitterly disappointed and he moved on. Robert Owen continued his evangelistic approach and was never silent on the subject of Socialism. 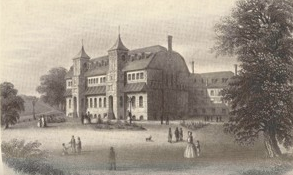 What became of Harmony Hall?

In 1845 the building was taken over as a Quaker school, this closed in 1896 and in the C20th the mansion was destroyed by fire. Very little now remains of the building, just two entrance gate pillars and a short run of wall. Queenwood Cottages were once the quarters of the master and the former chapel and the laundry are now converted into cottages. To the north of the site can be seen the walls of the of the kitchen garden and the remnants of the orchard. There is a wonderful collection of Robert Owens writings, put together by the National Co-operative Archive.