Portsmouth and King Charles I

Portsmouth and King Charles I, just what is the connection between the two?

Portsmouth and King Charles I had a relationship that began in 1623. The then Prince Charles, left Portsmouth with the Duke of Buckingham, to arrange a marriage between the Prince and the Infanta Maria, sister of King Philip IV of Spain.

The marriage was probably orchestrated by the Duke of Buckingham, George Villiers and was extremely unpopular with the English protestants. They feared a return to Catholism. The Duke, who had made himself indispensable to King James I sought to continue a similar relationship with the young Prince. By chance or by intent, the mission to arrange the marriage failed and both men were humiliated in the Spanish capital Madrid. Negotiations broke down and during the journey home, the Duke of Buckingham aligned himself closer and closer to the Prince. Villiers managed to use the humiliation of the two men to persuade Prince Charles to take revenge and wage war on the Spanish. This was in direct opposition to King James who had striven to maintain peace between England and Spain. Both Prince Charles and King James had been out maneuvered by the Duke. The Duke of Buckingham moved himself into a very strong political position and in effect took control of English foreign policy for the next few years. His control over the monarch and the power he held, made him one of the most reviled men of his times.

So what does this have to do with Portsmouth? 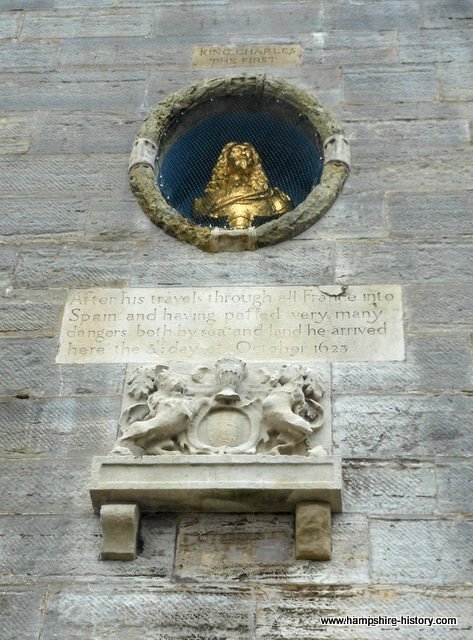 King Charles I bust given to Portsmouth in 1635

The people of Portsmouth greeted the Prince as he returned to Portsmouth on 5th October 1623, with ‘the greatest joy possible’.  This may have been a spontaneous outpouring of genuine affection for the King but given their suspicion of the Duke of Buckingham, maybe a bit surprising. Was it an orchestrated event arranged by the Duke, following their humiliation in Spain, to bolster his position? This seems more likely but the King was delighted by the show of affection and in 1635 the town was presented with a gilded lead bust of King Charles I, to commemorate his safe return to Portsmouth in 1623. Portsmouth and King Charles I were to have a connection from that day to this, as the bust was set in the wall of the Square Tower,

The Duke of Buckingham however had a rather less happy ending in Portsmouth, he was murdered in 1628, not far from the Square Tower, where he had set foot some five years previously to joyous applause from the people of Portsmouth.