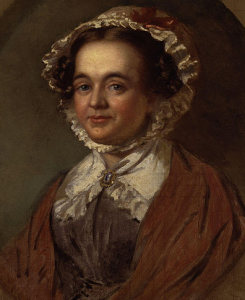 Hampshire seems blessed with female authors who were writing about the life and times of  early C19th England. The picture they paint for us of the social world at that time are probably amongst the most useful historical manuscripts available. Women who observed and commented on life that they witnessed, have left us a treasure trove of society to dip into. Mary Mitford falls into this category.

Mary Russell Mitford was born on the 16th December 1787, twelve years to the day after Jane Austen was born. They not only shared the same birthday but they also had fathers who were extremely important in their lives. Jane was born at Steventon and Mary was born at No 27 Broad Street in Alresford.

Her parents George and Mary were wealthy, her mother especially so. Mary Russell and George Midford (note the ‘d’ and ‘t’ seem to have been interchangeable) were married in New Alresford on the 17th October 1785.  Many writings about Mary suggest that she was their only child but the parish registers of St John’s Church New Alresford, tell us that she had an older brother. He was baptised Francis Russell Midford (Mitford) on 12th November 1786 but he died on the 23rd November of the same year and is buried in the church at Ashe, between Whitchurch and Basingstoke. There is also another child by the name of Francis Russell Midford, who was buried on 28th April 1789, which suggests George and Mary had another son born two years after Mary, who also died.

Mary must, therefore have been all the more precious to her parents.

Life was a complex affair for the young Mary Mitford, her father, Dr Midford, was extravagant in a reckless way. He was a handsome and gregarious fellow but a gambler, her mother is described as a plain and comely woman. In 1798 Mary was sent to school at 22 Hans Place, south of Harrods in Chelsea, where she received an excellent education. Her early years were full of literature and learning, continuing even after her father moved the family to a small lodging in London having lost the family fortune. A lucky lottery win, ticket 2224, bought for Mary on her tenth birthday, reinstated the family fortune and life picked up where it left off.

The family went to live close to Reading and Mary’s father began his extravagant lifestyle all over again. Many were entertained in their new house, they were good friends of William Cobbett and Mary and Jane Austen’s paths crossed.

Mary is writing all the while and in 1810, she published her first book of poems, at the cost of £59. Mary often frequented London, living amongst an interesting set of people who encouraged and supported her writing but still her father’s lifestyle had to be endured. She wrote widely about those she met and was warm and congratulatory about Jane Austen’s novels, ‘Pride and Prejeudice’ and ‘Sense and Sensibility’. 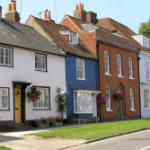 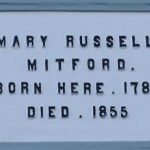 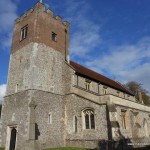 The Mitford’s return to riches was short lived, within a few years Mary’s father had gambled his way through their lottery prize. Life without money made life much harder for Mary and her written work began to take on an added importance, to provide income for the family. She had poetry books published in America and her first play ‘Julian’ was performed for just over a week at Covent Garden. Her mother’s health declined and Mary was left with a double burden, her father, whom she adored but who refused to find a way of earning an income and who became petulant and demanding and her beloved mother, who was by now suffering from dementia. Writing under such pressure was a continual trial but Mary continued to write poetry, novels and plays. Her book portraying the life and characters in a village was very well received and became a window into the world of the social whirl of life in an English village.

Her path crossed those of many other literary souls, including Elizabeth Barrett Browning with whom she engaged in an interesting correspondence and who became a good friend.

Mary Mitford was surrounded by friends who loved her deeply. When her father died leaving her a debt of £1000, her friends rallied to raise the sum for her. She continued to write from the home she had shared with her father at Swallowfield, just over the Hampshire border. Her garden as always, full of flowers that sustained her and calmed and her gentle and stoical personality, make her one of Hampshire History’s most admired characters.

Immerse yourself in a tranquil read that will transport you back to a village life, drawn from Mary Mitford’s own experiences of living in villages in Hampshire and on its borders.

Read ‘Our Village’ online or download it for free.