Hampshire The Oldest Shire in England 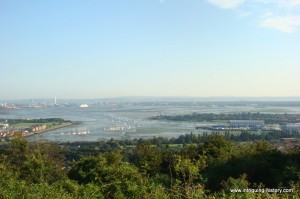 Over a thousand years ago, Hampshire held the seat of power in England.

It is the first of England’s shires to appear in the historical record, ‘The AngloSaxon Chronicle’. AD 757, it tells us that the councillors of the West
Saxons;

‘deprived Sigeberht of his kingdom, except for Hampshire.’

So how did Hampshire become such an important area within England, its seat of government, its ecclesiastical and royal heartland?

The key to to the naming of the ‘shire’ lies in the trading area that developed on the eastern side of modern day Southampton during the C7th. This area was called ‘Hamwic’ with its administrative centre called ‘Hamtun’.

Excavations have shown that it was a large manufacturing centre, producing metal, leather and cloth goods and the reason for this was that it was operating as trading port, trading with merchants in the Mediterranean and elsewhere in Europe. For this reason it is quite possible that the area needed to be identified for import and export stamps and duties and all manner of other administrative roles. It became ‘Hamtunscire’ and flourished as a port for the next 150 years.

The Kingdom of Wessex was an altogether much larger unit with changing boundaries but always at its heart was Hampshire.

The port of Hamwic  began to decline in the C9th and attention switched north towards Winchester.

Winchester was developed by King Alfred the Great as the capital of his Kingdom of Wessex and, as the population grew Southampton began to re-emerge as a significant port. Wessex began to dominate and  subsequently conquer the rest of England. The capital town drew would be rulers and powerful families like a magnet, it was lauded and visited by legatees from Rome and achieved a great episcopal standing.  The bishops of Winchester ranked among the most senior bishops in England during the medieval period and were certainly the wealthiest, the diocese was huge,  the land they posessed included vast estates reaching through seven counties in the south, owning over 60 manors.

To give context, second to Milan,it was the wealthiest diocese in the world.

Winchester became the capital of the entire kingdom. Even after the Norman Conquest, it retained its position as a seat of power and was the treasurey for the Kings of England.  It was at Winchester that the Domesday Book was initially kept and indeed was excluded from the Doomsday in the first instance. This shows its significance at the time. It had its own ‘Winton Doomsday’ in 1110.

It was the second largest town in England, only London was bigger.

The Bishops of Winchester were favoured by the Medieval monarchs, William Wykeham and William Waynflete both served as royal chancellors, Cardinal Beaufort was a leading statesman and diplomat in the first half of the fifteenth century and Richard Fox was an adviser to both Henry VII and VII

By the C16th and C17th both Portsmouth and Southampton were leading ports and of course Portsmouth was a leading naval base.

The county of Hampshire has an identity that is born out of its ancient historical roots, it is awash with visual monuments to its past, the landscape littered with the march of time. It is an ancient place through which the history of England can be told.