The Hampshire church treasure Hinton Ampner, is found in the ancient church of All Saints, where vestiges of Anglo Saxon work can be glimpsed in the mainly Norman structure. 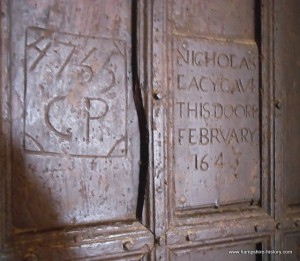 Hinton Ampner Church of All Saints, sits on its hilltop gazing out to Gander Down, in one direction it looks to the Meon Valley, in the other, across the Civil War battlefield of Cheriton, where two thousand Royalists soldiers lie now resting peacefully.

This church treasure is an interesting find in that it reminds us of a time in England, when a year of Civil War had passed and more was yet to come, in particular for the villages of Hinton Ampner and Cheriton. Look for the vestry door surrounded by an arch which could be late Saxon or early Norman in period, it being a slender tall affair. The door itself is of no great note but a plaque on the door aged with a rich patina, tells us that Nicholas Lacy gave it to the church in Feburary 1643, the year before the Battle of Cheriton in which so many Royalists soldiers were slaughtered in the valley below the church.

The Civil War in early 1643 was focused away from the southern counties and when local man Nicholas Lacy gave the church its vestry door, Leeds had just fallen to Parliamentarian forces and there would soon be a victory for the Royalists at Hopton Heath. What Nicholas Lacy would not know in Feburary 1643 though, was, that within six months the focus of the war would switch to the southern counties, as Lord Hopton had orders to subdue the enemy in Dorset, Wiltshire and Hampshire. The orders were changed yet again and the focus became Hampshire, when the Royalists seized back Winchester and Hopton moved to join with these forces.

The Civil War was creeping closer to Cheriton, until eventually, in early 1644, Waller set up headquarters in the old manor house at Hinton Ampner, behind the church of All Saints, ready to halt Hopton’s army.

So why did Nicholas Lacy give the door in February 1643?